Shakespeare Ranch, also known as the Western "Camelot", evokes the feel of a by-gone era that has been revered by the likes of the Kennedy and Onassis families. Offering more than 400 feet of sparkling shoreline, has hosted historic dignitaries and modern celebrities for well over 100 years. A 397-foot shared pier with private lift for a 40 foot boat offers the preferred means of transport to Tahoe's many lakeside restaurants, Edgewood golf course, and entertainment venues; and it's only a 10 minute boat ride to the California's Alpine Gold Coast. 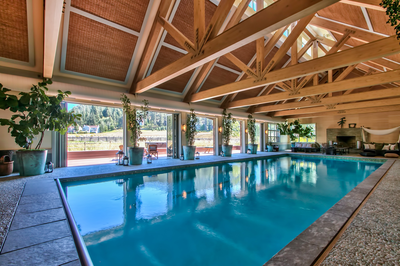 The lakefront compound is comprised of 17 guest homes, including 25 bedrooms, 25 bathrooms and 13 kitchens, one of which hosts the culinary fireworks of renowned chef Emeril Lagasse during annual celebrity events hosted at the Ranch. The feast-for-your-eyes property also includes an indoor pool house, horse stables, a greenhouse and a root cellar converted to an underground wine-tasting and tap room. The Glenbrook Rodeo, which benefits the Keep Memory Alive Foundation, is hosted at Shakespeare Ranch annually, harkening back to the days of the "Old West". A 397-foot shared pier with private lift for a 40 foot boat offers the preferred means of transport to Tahoe's many lakeside restaurants, golf courses, beaches and entertainment venues.

Where dignitaries and famed actors of the silver screen once landed by steamship to Glenbrook's shores, now modern day entertainers fly in by private jets to attend this annual benefit rodeo. Past headliners have included former Tonight Show host Jay Leno, and musicians Lionel Richie, Kenny "Babyface" Edmonds, Kenny Loggins, the band America, and the late Robin Williams. All performing in the circa 1870's 5,000 square foot entertainment "barn," to which former President George Bush remarked, "They don't make barns like this in Texas!"

The ranch was named after an iconic rock monolith on the property known as Shakespeare Rock - that, according to many visitors, resembles the beloved playwright. "The history of the area is what's so interesting," adds Camille Ruvo. "To know about the rodeos and the other things that happened on the ranch for many, many years--and then it just sat there quiet. To continue on with some of those traditions became a goal for us." After many happy decades at the estate, the owners have listed the property in order to be closer to their children who now live on the east coast. However, their roots in Glenbrook run deep, and they will maintain a residence in this coveted Lake Tahoe community. This is only the second time since 1861 the property has been listed for sale.

Shakespeare Ranch is the largest residential lakefront property on the Lake Tahoe market, and if it sells anywhere near its listing price, it would easily be the highest-priced residential sale in Lake Tahoe's history. "There are few places in the world that match the diversity in lifestyle that Shakespeare Ranch offers," says Lexi Cerretti, Shakespeare Ranch's co-listing agent with Sierra Sotheby's International Realty. "With the opportunity for an equestrian or ranch property that doubles as an alpine skiing retreat, and summer home complete with community golf course and beach club. This is truly a four-season paradise an hour by air to Los Angeles and San Francisco."

"The gated community of Glenbrook, Nevada is a really unique place," states Claudia Thompson, Glenbrook resident and co-listing agent with Sierra Sotheby's International Realty. "Buyers and residents here are leaders in industry, finance, and technology. They're entrepreneurs and professionals, but live an intentionally low-key lifestyle where high profile people are just part of the community."

Sales have lead to a limited amount of inventory in luxury properties and the market has picked up. New construction and restored residences are in demand among today's global and mobile billionaires, who don't want to spend several years building. Multimillion-dollar home sales in the upper price strata are at all-time highs statewide, according to second-quarter statistics from real estate information service DataQuick. 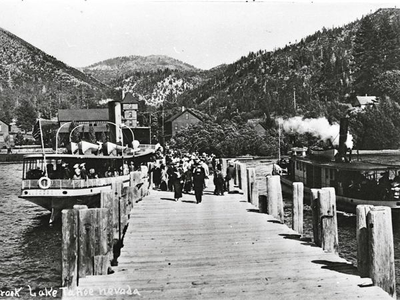 In 1984, the current owner bought a condo in the 300-home, gated resort community of Glenbrook, Nevada, and then expanded his holdings to include the waterfront acreage, 17 New England-style guest homes, and a roughly 5,000-square-foot barn that dates back to the 1870's. Deeply rooted in the history and the development of the entire Tahoe region, Glenbrook was the center of the area's most influential logging family, headed by visionary businessman Duane L. Bliss, who helped settle the town in 1860. While simultaneously protecting younger growth trees by limiting harvesting, Bliss built the region's largest and most successful logging company, and then, as the lumber industry slowed, the renowned Glenbrook Inn. In the years following the demise of both mining and logging, the Inn became the fashionable destination of affluent visitors, who arrived via steamer from Tahoe City. The list of politicians and celebrities that frequented Glenbrook was a virtual who's who of the era, with everyone from President Grant to Thomas Edison, Henry Ford to Joaquin Miller, and Clark Gable and Rita Hayworth - all signed in as frequent visitors.

Lexi Cerretti and Claudia Thompson of Sierra Sotheby's International Realty have the listing.