According to the National Association of Realtors, a big surge in the Northeast and a smaller gain in the South pushed U.S. existing-home sales up in November 2016 for the third consecutive month.

Total existing-home sales, which are completed transactions that include single-family homes, townhomes, condominiums and co-ops, rose 0.7 percent to a seasonally adjusted annual rate of 5.61 million in November from a downwardly revised 5.57 million in October. November's sales pace is now the highest since February 2007 (5.79 million) and is 15.4 percent higher than a year ago (4.86 million).

Lawrence Yun, NAR chief economist, says it's been an outstanding three-month stretch for the housing market as 2016 nears the finish line. "The healthiest job market since the Great Recession and the anticipation of some buyers to close on a home before mortgage rates accurately rose from their historically low level have combined to drive sales higher in recent months," he said. "Furthermore, it's no coincidence that home shoppers in the Northeast - where price growth has been tame all year - had the most success last month."

Total housing inventory at the end of November dropped 8.0 percent to 1.85 million existing homes available for sale, and is now 9.3 percent lower than a year ago (2.04 million) and has fallen year-over-year for 18 straight months. Unsold inventory is at a 4.0-month supply at the current sales pace, which is down from 4.3 months in October.

"Existing housing supply at the beginning of the year was inadequate and is now even worse heading into 2017," added Yun. "Rental units are also seeing this shortage. As a result, both home prices and rents continue to far outstrip incomes in much of the country."

"First-time buyers in higher priced cities will be most affected by rising prices and mortgage rates next year and will likely have to stretch their budget or make compromises on home size, price or location," said Yun.

In the Midwest, existing-home sales decreased 2.2 percent to an annual rate of 1.33 million in November, but are still 18.8 percent above a year ago. The median price in the Midwest was $180,300, up 6.5 percent from a year ago. 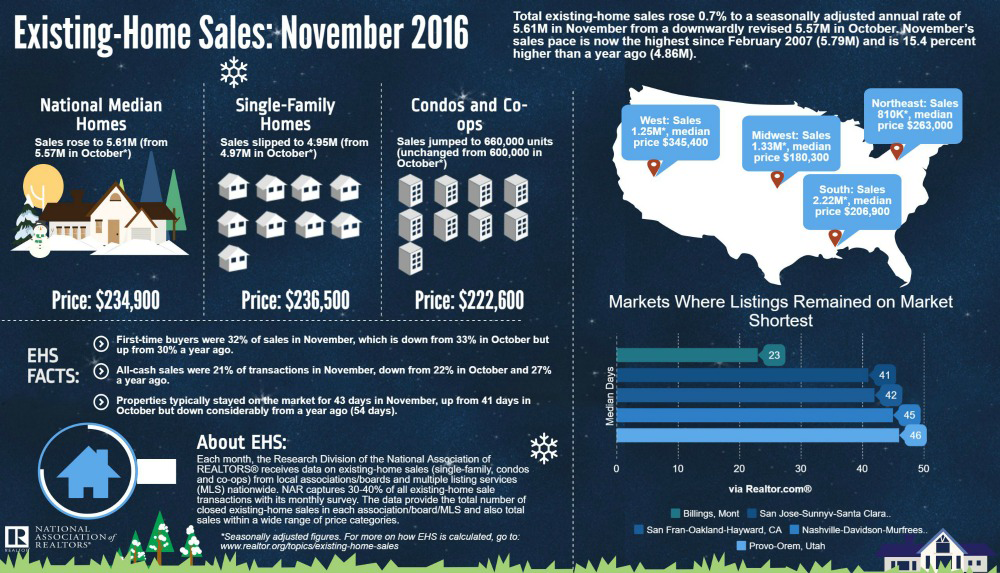