According to new data by the National Association of Realtors, existing U.S. home sales continued to climb in August 2020, marking three consecutive months of positive sales gains. Each of the four major regions experienced both month-over-month and year-over-year growth, with the Northeast seeing the greatest improvement from the prior month.

Total existing-home sales, completed transactions that include single-family homes, townhomes, condominiums and co-ops, rose 2.4% from July to a seasonally-adjusted annual rate of 6.00 million in August. Sales as a whole rose year-over-year, up 10.5% from a year ago (5.43 million in August 2019).

"Home sales continue to amaze, and there are plenty of buyers in the pipeline ready to enter the market," said Lawrence Yun, NAR's chief economist. "Further gains in sales are likely for the remainder of the year, with mortgage rates hovering around 3% and with continued job recovery."

Total housing inventory at the end of August totaled 1.49 million units, down 0.7% from July and down 18.6% from one year ago (1.83 million). Unsold inventory sits at a 3.0-month supply at the current sales pace, down from 3.1 months in July and down from the 4.0-month figure recorded in August 2019.

Scarce inventory has been problematic for the past few years, according to Yun, an issue he says has worsened in the past month due to the dramatic surge in lumber prices and the dearth of lumber resulting from California wildfires.

"Over recent months, we have seen lumber prices surge dramatically," Yun said. "This has already led to an increase in the cost of multifamily housing and an even higher increase for single-family homes."

Yun says the need for housing will grow even further, especially in areas that are attractive to those who can work from home. As highlighted in NAR's August study, the 2020 Work From Home Counties report, remote work opportunities are likely to become a growing part of the nation's workforce culture. Yun believes this reality will endure, even after a coronavirus vaccine is available.

"Housing demand is robust but supply is not, and this imbalance will inevitably harm affordability and hinder ownership opportunities," he said. "To assure broad gains in homeownership, more new homes need to be constructed."

Distressed sales - foreclosures and short sales - represented less than 1% of sales in August, equal to July's percentage, but down from 2% in August 2019.

"The past few months have shown how valuable real estate is in the country, both to our nation's economy and to individuals who have been given an opportunity to rethink their location and redesign their lifestyle," said NAR President Vince Malta. "NAR maintains robust advocacy efforts on behalf of our 1.4 million Realtors - including hundreds of thousands of housing providers - to ensure this industry can continue to lead in America's economic recovery."

Existing condominium and co-op sales were recorded at a seasonally adjusted annual rate of 630,000 units in August, up 8.6% from July and up 6.8% from one year ago. The median existing condo price was $273,300 in August, an increase of 7.8% from a year ago.

The Mortgage Bankers Association's Joel Kan also commented on NAR's housing report by saying, "The August increase in existing-home sales was further confirmation of the housing market's V-shaped recovery and overall strength in demand. The annualized pace of sales hit the 6-million mark for the first time since 2006, as transactions delayed by the pandemic continued to catch up. August was the second consecutive month of strong year-over-year sales gains, which is noteworthy considering the declines from April through June, and sales being down 31 percent in May. Last month's strong sales activity was consistent with MBA's purchase applications data, which has risen annually for four straight months.

"It is concerning that housing inventory continued to decline last month and was over 18 percent lower than in 2019. This lack of supply continues to push home-price growth higher. The 11% gain in prices is far above income growth and threatens overall affordability - especially for first-time buyers. Homebuilders continue to face constraints, including higher production costs. However, it's clear that more inventory is needed to keep home prices from rising too quickly."

For three straight months, home sales have climbed in every region compared to the previous month. Median home prices grew at double-digit rates in each of the four major regions from one year ago. 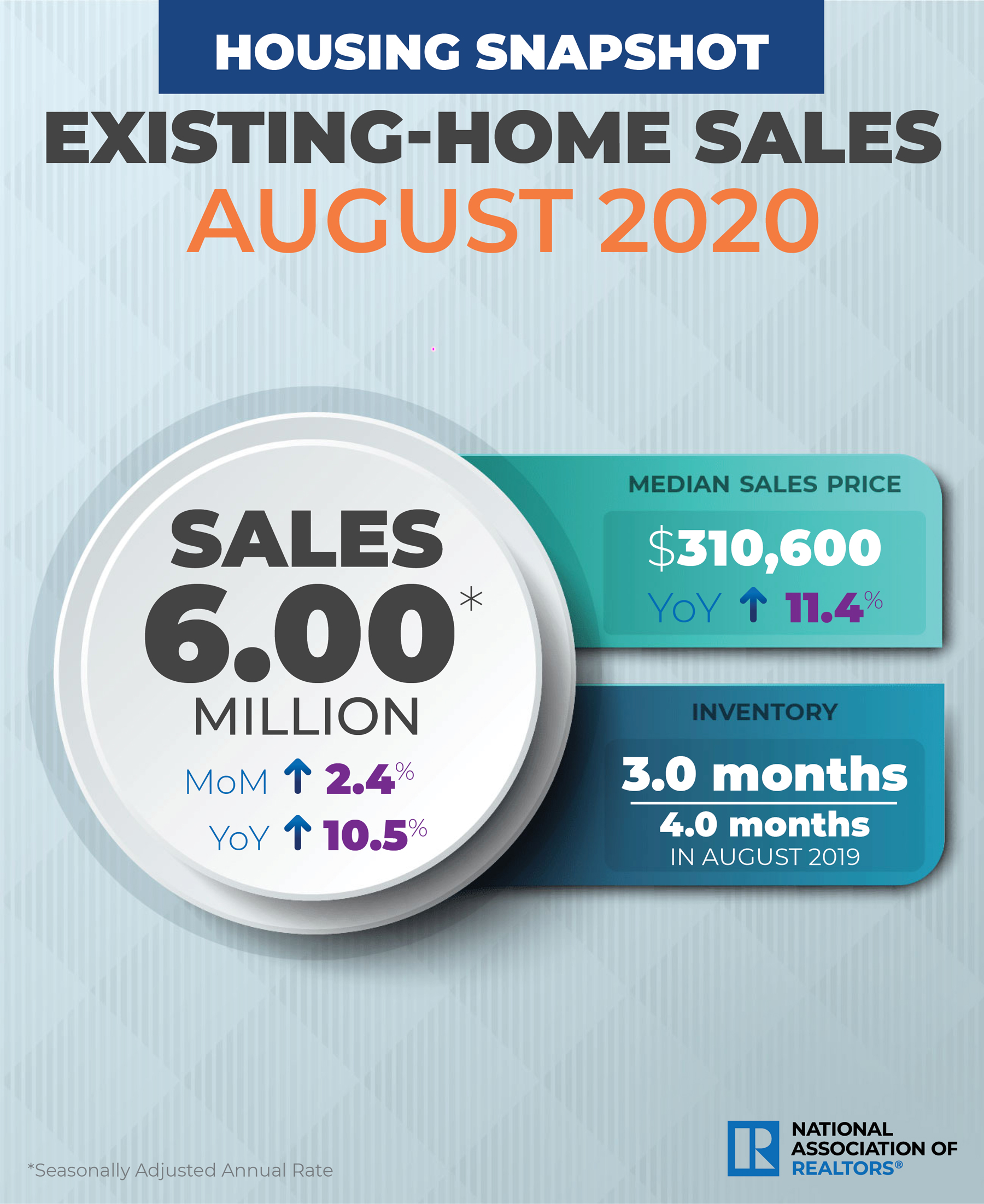