Housing inventory has been in short supply for the past decade in large part because builders have struggled to overcome the scarcity and rising costs of labor and materials. But a flood of homes will come on the market in the next 20 years as Baby Boomers age - enough to affect local economies in traditional retirement areas.

The Boomer generation, once 76 million strong in the U.S., dwarfed the 55 million Gen-Xers and 62 million Millennials it immediately preceded. Today, about a third of America's homes are owned by those 60 and older, and a new Zillow analysis shows the impact their aging will have on the housing market.

While virtually all areas will feel the effects to some degree - between one-fifth and one-third of the current owner-occupied housing stock was impacted in every metro analyzed - this wave won't hit all at once and won't strike all markets equally.

Retirement hubs like Florida and Arizona are likely to feel the sharpest impact. If demand erodes because fewer people choose to retire there in the coming years, those areas might end up with excess housing. Also heavily impacted will be regions like the Rust Belt, which saw younger people move away in recent decades, leaving older generations to make up a larger share of the population.

Some regions will be far less affected. These include Salt Lake City, where a much smaller share of homeowners are in their golden years, as well as Atlanta, Austin, Dallas andHouston - all of which are vibrant but relatively inexpensive places that tend to attract younger residents looking for an affordable alternative to expensive coastal cities.

Still, the differences in the share of homes released by seniors among metros are small compared to the differences within them. Palm Springs, for example, will see 45% of its owner-occupied homes vacated by 2037, compared with 23.8% of the combined L.A.-Riverside metro area overall. El Mirage and Sun City figure to see nearly two-third of their homes available, compared with 28.2% of the Phoenix area at-large.

Housing released by the Silver Tsunami - upwards of 20 million homes hitting the market through the mid-2030s - will provide a substantial and sustained boost to supply, comparable to the fluctuations that new home construction experienced in the 2000s boom-bust cycle. Whether this housing is appropriately located, priced and styled to meet future demand will be an important factor in how it pairs with new construction to alleviate today's housing shortage. It seems likely that the construction industry in the coming two decades will place a greater emphasis than before on updating existing properties. 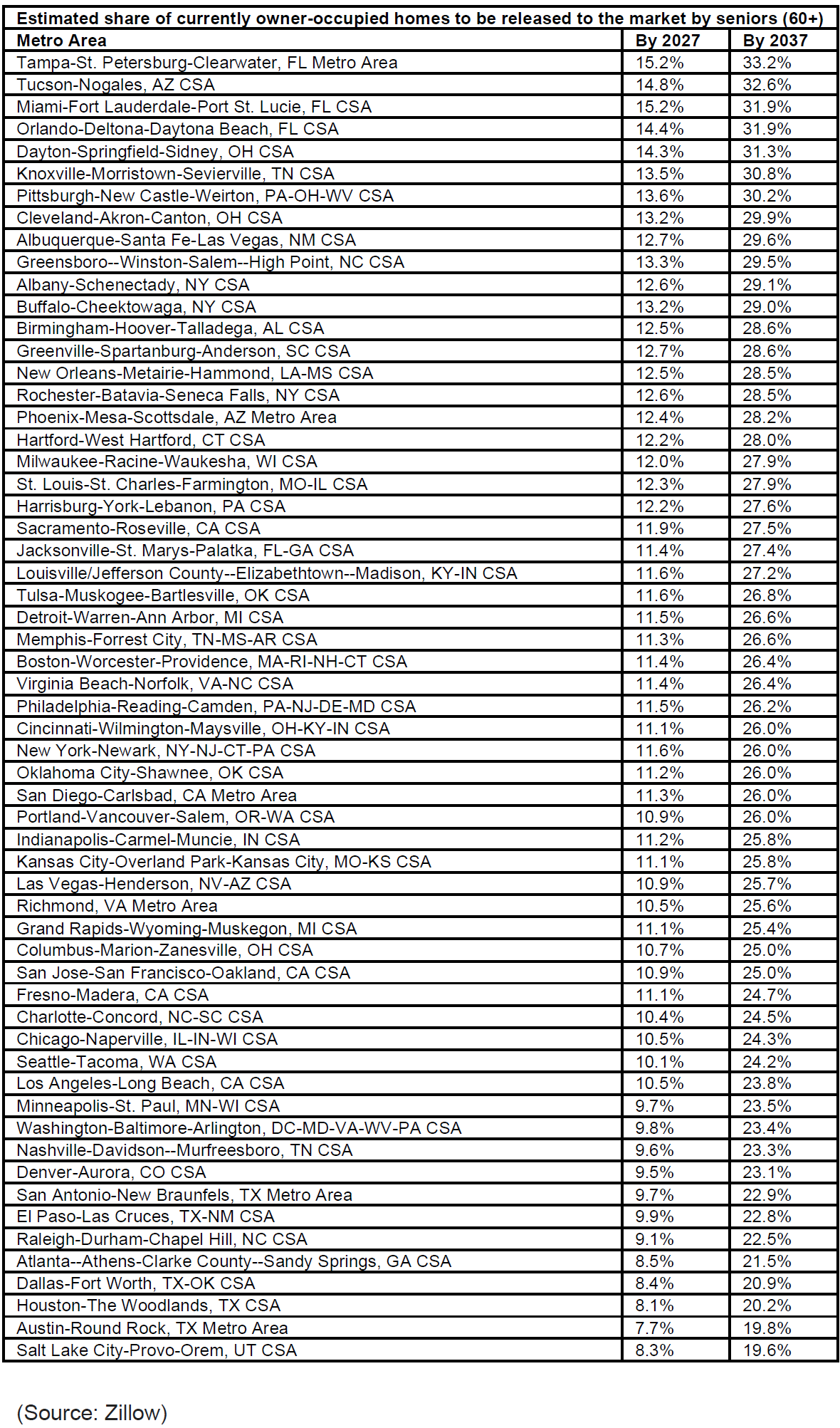