Single Females a Key Driver of U.S. Home Sales in 2018

The National Association of Realtors is reporting this week that single female buyers continue to be a powerful force in the U.S. housing market, while low inventory, rising interest rates and increasing home prices remain, holding back first-time buyers despite notable interest in buying a home.

This is according to the National Association of Realtors' 2018 Profile of Home Buyers and Sellers, which identified numerous consumer and housing trends in 2018, including mounting student debt balances; the impact of pets on home buying decisions; increases in down payments for all buyers; the rising age of repeat buyers; and the fact that a vast number of respondents use a real estate agent to buy or sell a home, which kept for-sale-by-owner transactions at an all-time low.

"With the lower end of the housing market - smaller, moderately priced homes - seeing the worst of the inventory shortage, first-time home buyers who want to enter the market are having difficulty finding a home they can afford," said NAR Chief Economist Lawrence Yun. "Homes were selling in a median of three weeks and multiple offers were a common occurrence, further pushing up home prices.  These factors contributed to the low number of first-time buyers and the struggles of would-be buyers dreaming of joining the ranks of homeownership."

Other key trends of NAR's buyers and sellers report include:

For the second year in a row, single female buyers accounted for 18 percent of all buyers. The group was the second most common household buyer type behind married couples (63 percent). Single male buyers came in third and accounted for half the number of buyers as their female counterparts (9 percent). However, single males tended to purchase more expensive homes, with a median price of $215,000, compared to single females with a median price of $189,000 (the lowest of all household buyer types). 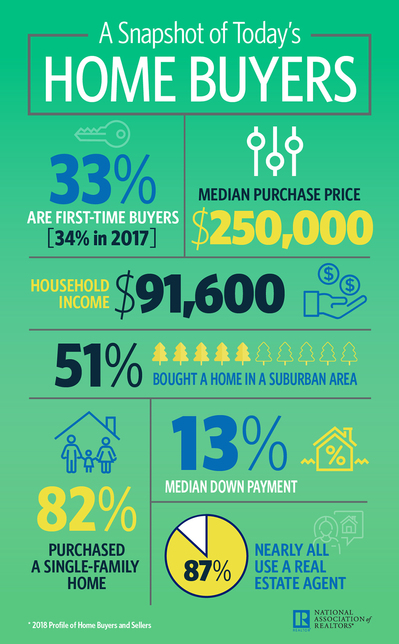 "Low inventory, rising interest rates and student loan debt are all factors contributing to the suppression of first-time home buyers," said Yun. "However, existing home sales data shows inventory has been rising slowly on a year-over-year basis in recent months, which may encourage more would-be buyers who were previously convinced they could not find a home to enter the market."

For the third year in a row, 95 percent of buyers used the Internet at some point during their home search process, and 50 percent said that they found the home they eventually purchased online. Eighty-six percent of buyers used a real estate agent in their home search, and repeat buyers were more likely to use an agent than first-timers (87 percent to 86). Overall, 87 percent of buyers ended up purchasing their home through a real estate agent (the same as 2017), as finding the right home and negotiating terms of sale were the top factors buyers desired from their agent. Ninety percent of respondents said they would definitely or probably use their agent again or recommend them to someone else.

"With inventory so low, buyers are relying on their agent's knowledge of markets and neighborhoods to find listings, rather than relying only on online searches," said NAR President Elizabeth Mendenhall.

Student loan debt continues to be an issue

"Even with a thriving economy and an abundance of job opportunities in many markets, monthly student loan payments coupled with sky-high rents and rising home prices make it exceedingly difficult for potential buyers to put aside savings for a down payment," said Yun.

Down payments higher for all buyers 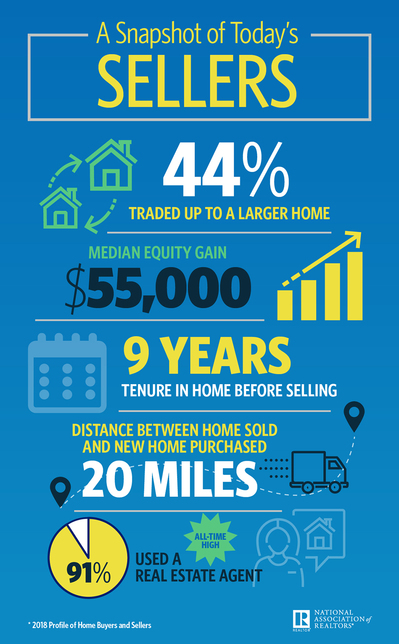 A majority of buyers continue to choose a detached, single-family home (82 percent) as opposed to a townhouse or row house (8 percent) or a condo/duplex/apartment unit (4 percent).

For the third straight year, the median age of first-time homebuyers was 32 years old. A majority of first-time buyers were married couples (54 percent), followed by single females (18 percent). Their median income was the same as last year's at $75,000, and they spent a median of $203,700 on a home. These buyers were more likely to purchase smaller homes than repeat buyers, with a median size of 1600 square feet.

Fifteen percent of all buyers said that convenience to vets and/or outdoor space for their pet was a critical factor in determining where they wanted to purchase their home. That number rises to 20 percent, or one-fifth of buyers, for unmarried couples.

"NAR conducted a survey on the important role pets play in our home buying decisions and the unique considerations that pet owners face," said Mendenhall.

"Realtors understand that when someone buys a home, they are buying it with the needs of their whole family in mind. And any pet owner will tell you that their animals are an important and beloved part of their family."

Downsizing not a trend

Only 9 percent of buyers listed downsizing as a factor in their decision to move. In fact, 73 percent of buyers purchased a home that was either larger or similar in size to what they previously owned. "Homeowners that may be looking to downsize tend to be competing for the same homes as first-time buyers, and we are experiencing a scarcity of inventory in those smaller sized, moderately priced homes," said Yun. "These buyers, not finding the smaller home they are looking for, may decide to purchase an equivalently sized home or simply stay put in their current home."

For-Sale-By-Owner sales accounted for 7 percent of all sales - the lowest number recorded in this survey's history. This number has been steadily declining since a high of 15 percent in 1981, with more and more owners relying on the expertise of an agent to help navigate the complicated process and intricacies of a home sale.

NAR mailed a 129-question survey in July 2018 using a random sample weighted to be representative of sales on a geographic basis to 155,250 recent home buyers.

Respondents had the option to fill out the survey via hard copy or online; the online survey was available in English and Spanish. A total of 7,191 responses were received from primary residence buyers. After accounting for undeliverable questionnaires, the survey had an adjusted response rate of 4.6 percent. The sample at the 95 percent confidence level has a confidence interval of plus-or-minus 1.15 percent.

Recent home buyers had to have purchased a home between July 2017 and June 2018. All information is characteristic of the 12-month period ending in June 2018 with the exception of income data, which are for 2017.