According to the National Association of Realtors, existing-home sales in the U.S. weakened in June 2019, as total sales saw a small decline after a previous month of gains. While two of the four major U.S. regions recorded minor sales jumps, the other two - the South and the West - experienced greater declines last month.

Total existing-home sales, completed transactions that include single-family homes, townhomes, condominiums and co-ops, dropped 1.7% from May to a seasonally adjusted annual rate of 5.27 million in June. Sales as a whole are down 2.2% from a year ago (5.39 million in June 2018).

"Home sales are running at a pace similar to 2015 levels - even with exceptionally low mortgage rates, a record number of jobs and a record high net worth in the country," said Lawrence Yun, NAR's chief economist. Yun says the nation is in the midst of a housing shortage and much more inventory is needed. "Imbalance persists for mid-to-lower priced homes with solid demand and insufficient supply, which is consequently pushing up home prices," he said.

Yun said other factors could be contributing to the low number of sales. "Either a strong pent-up demand will show in the upcoming months, or there is a lack of confidence that is keeping buyers from this major expenditure. It's too soon to know how much of a pullback is related to the reduction in the homeowner tax incentive."

Total housing inventory at the end of June increased to 1.93 million, up from 1.91 million existing-homes available for sale in May, but unchanged from the level of one year ago. Unsold inventory is at a 4.4-month supply at the current sales pace, up from the 4.3 month supply recorded in both May and in June 2018.

"Historically, these rates are incredibly attractive," said NAR President John Smaby, a second-generation RealtorÒ from Edina, Minnesota and broker at Edina Realty. "Securing and locking in on a mortgage now - given the current, favorable conditions - is a decision that will pay off for years to come."

As the share of first-time buyers rose, individual investors, who account for many cash sales, purchased 10% of homes in June, down from 13% recorded in both May 2019 and June 2018. All-cash sales accounted for 16% of transactions in June, down from May and a year ago (19% and 22%, respectively).

Distressed sales - foreclosures and short sales - represented 2% of sales in June, unchanged from May but down from 3% in June 2018. Less than 1% of June 2019 sales were short sales.

Single-family home sales sat at a seasonally adjusted annual rate of 4.69 million in June, down from

Existing condominium and co-op sales were recorded at a seasonally adjusted annual rate of 580,000 units in June, down 3.3% from the prior month and down 6.5% from a year ago. The median existing condo price was $260,100 in June, which is up 2.8% from a year ago. "Condos are typically more affordable than a detached single-family home, but only a small fraction of condos are FHA-certified," said Yun. 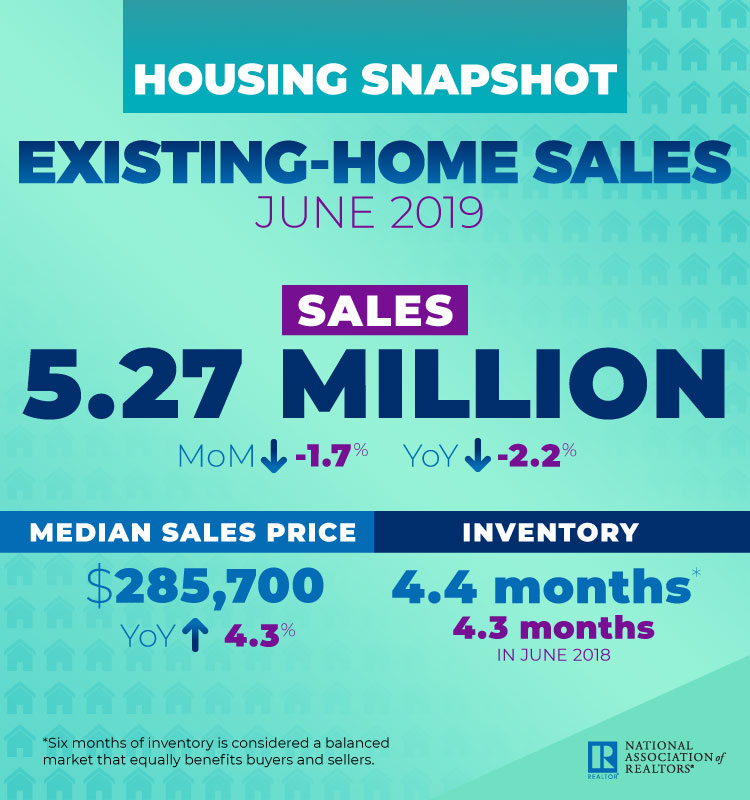