According to the National Association of Realtors, an improving U.S. economy, multiple years of strong job growth and the notable increase in home values in most markets fueled a greater share of purchases from Generation X households over the past year.

The National Association of Realtors 2017 Home Buyer and Seller Generational Trends study is also reporting this week that a growing number of millennials and younger boomer buyers have children living at home; student debt is common among Gen X and boomer households; more millennials are buying outside the city; and younger generations are more likely to use a real estate agent.

Much of the spotlight in recent years has focused on the several challenges millennials are enduring on their journey to homeownership. According to Lawrence Yun, NAR chief economist, lost in this discussion are the numerous Generation X households who bought their first home, started a family and entered the middle part of their careers only to be rattled by job losses, falling home values and overall economic uncertainty during and after the Great Recession.

This year's survey reveals that debt and little or no equity in their home slowed many Gen X households from buying sooner. Recent Gen X buyers delayed buying longer than millennials because of debt, were the most likely generation to have previously sold a distressed property and were the generation most likely to want to sell earlier but couldn't because their home was worth less than their mortgage. Furthermore, Gen X buyers indicated they had the most student loan debt ($30,000).

"Gen X sellers' median tenure in their previous home was 10 years, which puts many of them selling a property they bought right around the time home values were on the precipice of declining," said Yun. "Fortunately, the much stronger job market and 41 percent cumulative rise in home prices since 2011 have helped a growing number build enough equity to finally sell and trade up to a larger home. More Gen X sellers are expected this year and are definitely needed to ease the inventory shortages in much of the country."

The uptick in purchases from Gen X buyers this year (28 percent) was the highest since 2014 and up from 26 percent in 2016. Millennials were the largest group of recent buyers for the fourth consecutive year (34 percent), but their overall share was down slightly from a year ago (35 percent). Baby boomers were 30 percent of buyers, and the Silent Generation made up 8 percent.

This year's survey also brought to light how the soaring cost of rent in many areas is likely influencing the decision of middle-aged parents to buy a home with their young adult children in mind. Younger boomers were the most likely to purchase a multi-generational home (20 percent; 16 percent in 2016), and the top reason for doing so was that children over 18 years old either moved back home or never left (30 percent; 27 percent in 2016).

"The job market is very healthy for young adults with a college education, but repaying student debt and dealing with ever-increasing rents on an entry-level salary are forcing many to either shack-up with several roommates or move back home," said Yun. "This growing trend of delayed household formation is one of the main contributors to the nation's low homeownership rate."

Student debt is not just a millennial problem

Debt, particularly from student loans, appears to be a portion of the household budget of buyers in every generation. While millennials were the most likely to have student debt (46 percent), their typical balance ($25,000) was lower than Gen X buyers ($30,000). A combined 16 percent of younger and older boomer buyers also had student debt, with a median balance of over $10,000 for each group.

Among the share of buyers who said saving for a down payment was the most difficult task, millennials were most likely to cite student loans as the debt that delayed saving (55 percent), followed by Gen X (29 percent) and younger boomers (9 percent).

"Repaying student debt also appears to be slowing some current homeowners who went to graduate school and now can no longer afford to sell and trade up because of their loans," added Yun. "Nearly a third of homeowners in a NAR survey released last year said student debt is preventing them from selling a home to buy a new one."

More millennials moving to the suburbs...with their kids

Similar to previous years, roughly two-thirds of millennial buyers are married. One aspect of their household that has changed is the number of children in them. In this year's survey, 49 percent of millennial buyers had at least one child, which is up from 45 percent last year and 43 percent two years ago.

With more kids in tow, the need for more space at an affordable price is increasingly pushing millennial buyers outside the city. Only 15 percent of millennial buyers bought in an urban area, which is down from 17 percent last year and 21 percent two years ago.

"Millennial buyers, at 85 percent, were the most likely generation to view their home purchase as a good financial investment," added Yun. "These strong feelings bode well for even greater demand in the future as more millennials settle down and begin raising families. A significant boost in new and existing inventory will go a long way to ensuring the opportunity is there for more of them to reach the market."

Regardless of age, buyers and sellers continue to see real estate agents as an integral part of a real estate transaction. In this year's survey, nearly 90 percent of respondents said they worked with a real estate agent to buy or sell a home. This kept for-sale-by-owner transactions down at their lowest share ever (8 percent).

"Online and mobile technology is increasingly giving consumers a glut of real estate data at their disposal," said NAR President William E. Brown, a Realtor from Alamo, California. "However, at the end of the day, buyers and sellers of all ages - but especially younger and often DIY-minded consumers - seek and value a Realtors' ability to dissect this information and use their expertise and market insights to coach buyers and sellers through the complexities of a real estate transaction."

NAR mailed a 132-question survey in July 2016 using a random sample weighted to be representative of sales on a geographic basis to 93,171 recent homebuyers. Respondents had the option to fill out the survey via hard copy or online; the online survey was available in English and Spanish. A total of 5,465 responses were received from primary residence buyers. After accounting for undeliverable questionnaires, the survey had an adjusted response rate of 5.9 percent. The sample at the 95 percent confidence level has a confidence interval of plus-or-minus 1.32 percent. 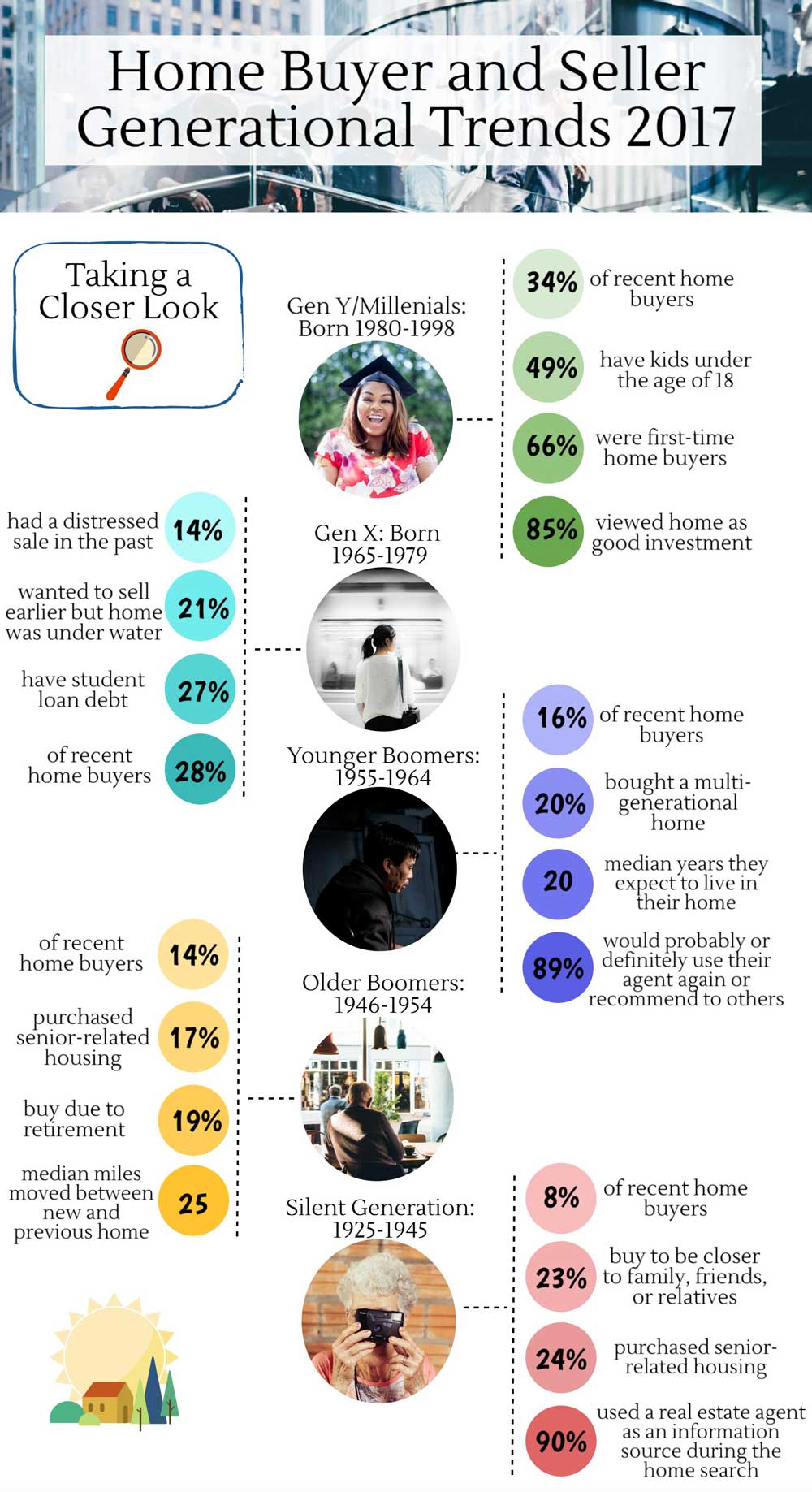 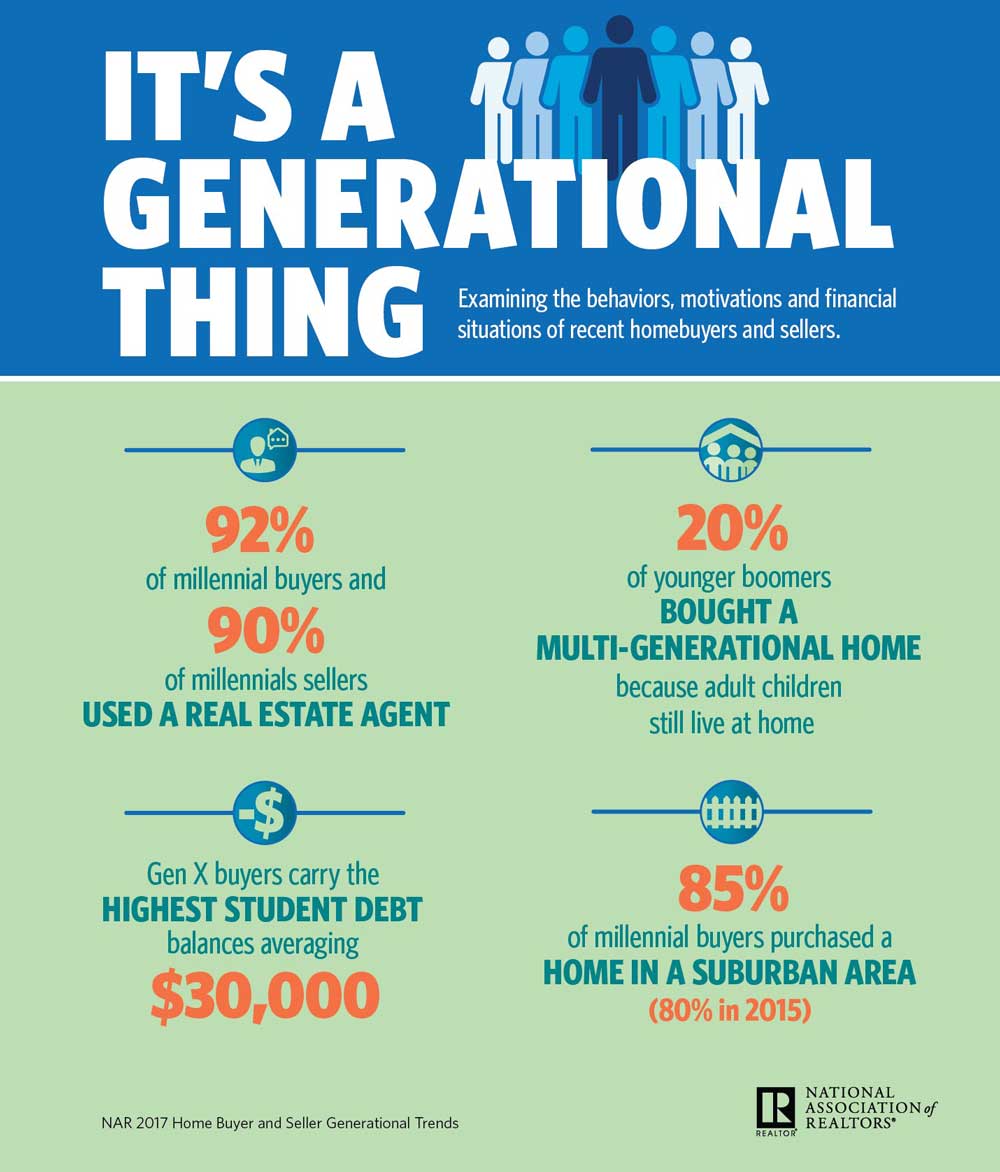