The 2019 Remodeling Impact Report, an examination of 20 projects, surveyed Realtors, consumers who have taken on home renovation projects and members of the National Association of the Remodeling Industry.

The report examines a variety of remodeling projects, using responses to rank the appeal of a given project, rank the value of the project in terms of resale and determine its overall functionality. The findings also reveal the reasons for remodeling, the success of taking on the various projects and the increased happiness reported in the home upon completion of the job.

After completing a remodeling project, 74% of owners have a greater desire to be in their home, 65% say they experience increased enjoyment, and 77% feel a major sense of accomplishment, according to the survey. Additionally, 58% report a feeling of happiness when they see their completed projects, while 38% say they have a feeling of satisfaction.

"Realtors and homeowners alike recognize the value of taking on a major home remodeling project," said NAR President John Smaby. "While these tasks can be time consuming and costly, the projects are well worth the temporary inconveniences, as this report shows, and the final products ultimately reward us, with feelings of accomplishment, satisfaction and higher homes values."

NAR calculated what it refers to as a "Joy Score" for each project. The score is based on the happiness homeowners reported with their renovations; the more pleased with a given project, the better the Joy Score, with the highest possible score being 10. Interior projects that received some of the higher Joy Scores are complete kitchen renovations, closet renovations, full interior and individual room paint jobs, kitchen upgrades and basement conversions to living areas. Exterior jobs with the highest Joy Scores were new fiberglass or steel front doors, new vinyl and wood windows and new roofing.

"The NAR report shows us that people often remodel for resale purposes, but it also reminds us that homeowners remodel, too, with the desire to make a home their own," said Lawrence Yun, NAR chief economist.

A complete kitchen renovation received a top Joy Score of 10. Ninety-three percent of those polled said they have a greater desire to be at home since the completion of their kitchen, and 95% said they have an increased sense of enjoyment when at home.

"The kitchen is a space homeowners frequent regularly throughout the course of the day," Yun noted. "So when that area is remodeled to owners' exact preferences - as they enter and exit the room - they continually experience the satisfaction of a job well done."

The most important result of a kitchen renovation is improved functionality and livability, according to 46% of those polled. As to the reasons why they decided to take on the project, 24% say they wanted to upgrade worn-out surfaces and materials. Another 20% report they had recently moved into their home and had a desire to customize the kitchen to their particular tastes.

"Kitchens serve as the "heart of the home" for many, and whether you like to entertain or cook, updating a kitchen ensures greater access and use as homeowners age, especially when the upgrades take accessibility into account," said NARI 2019-2020 President of the Board, Robert Kirsic, (CKBR) certified kitchen and bath remodeler. "No matter the size of the kitchen, a certified professional can guide the design and build process in a way that will yield joy and happiness for the homeowner."

Upgrading home closets was another task that received a 10 Joy Score. This is due in part to the inconvenience of a disorganized closet, which is something a homeowner encounters daily, often at the start of their day. When a closet renovation is finished, the sense of achievement is immediate. Thusly, 68% of those surveyed say they feel a major sense of accomplishment when they think about the completed project. Nearly three-quarters, 72%, report having a greater desire to be at home since finishing the job.

With a closet redesign, 56% say the most important result is better functionality and livability. Fifty-four percent say the top reason for doing the job was the need to improve organization and storage. Fifteen percent answered that it was time for a change.

Completing a full interior paint job in the home scored a 9.8 Joy Score. A finished paint job is usually visible in every room in a home, which speaks to how important a task this is to respondents.

A vast majority, 88%, say they have a greater desire to be home since having their home freshly painted. Eighty-six percent report feeling a major sense of accomplishment when they think of the project.

As mentioned, the installation of fiberglass front doors is a highly rated exterior project, receiving a Joy Score of 9.7. Seventy-nine percent of polled homeowners say they have had a greater desire to be at home upon completion of the job. Sixty-seven percent say they have an increased sense of enjoyment when they are at home, and another 69% state that they feel a major sense of accomplishment when they think of the completed project.

New vinyl windows also received a very high Joy Score, 9.6, while 42% of those surveyed say the most important result is improved functionality and livability. As for the top reasons for doing the job, 47% say they had a desire to improve their home's energy efficiency and 23% say they wanted to upgrade worn-out surfaces, finishes and materials.

Remodelers often take on projects with resale in mind, rather than their own home preferences. The report found the top projects for recovering cost are new roofing, hardwood floor refinishing, and new hardwood floor installation. NARI Remodelers estimate that new roofing costs $7,500, and Realtors® estimate that new roofing helps sellers recover $8,000, on average. That equates to 107% of value recovered from the project. 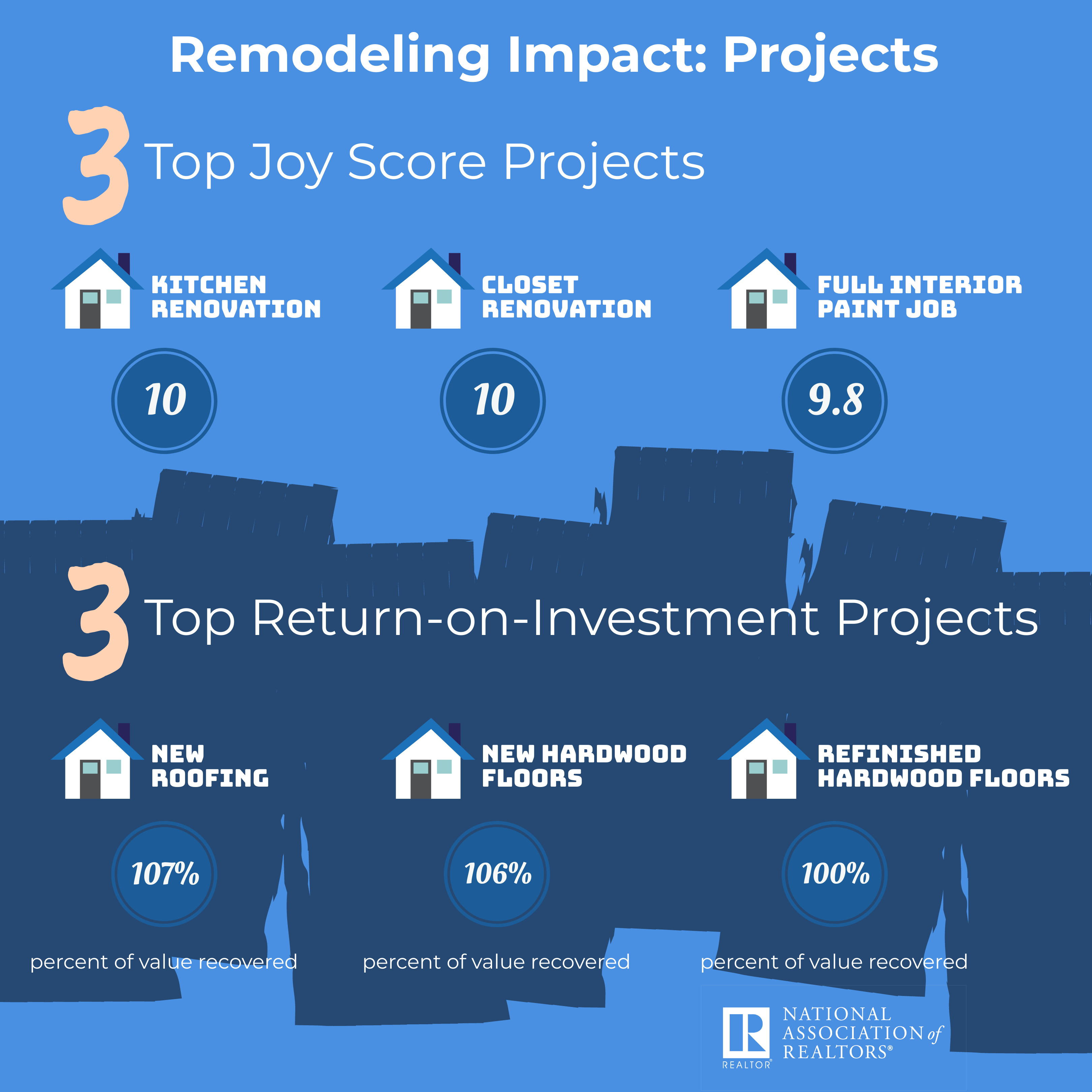