According to the National Association of Realtors, U.S. home sales stumbled in August 2017 for the fourth time in five months as strained supply levels continue to subdue overall activity. Sales gains in the Northeast and Midwest were outpaced by declines in the South and West.

Total existing-home sales, which are completed transactions that include single-family homes, townhomes, condominiums and co-ops, retreated 1.7 percent to a seasonally adjusted annual rate of 5.35 million in August from 5.44 million in July. Last month's sales pace is 0.2 percent above last August, and is the lowest since then.

Lawrence Yun, NAR chief economist, says the slump in existing sales stretched into August despite what remains a solid level of demand for buying a home. "Steady employment gains, slowly rising incomes and lower mortgage rates generated sustained buyer interest all summer long, but unfortunately, not more home sales," he said. "What's ailing the housing market and continues to weigh on overall sales is the inadequate levels of available inventory and the upward pressure it's putting on prices in several parts of the country. Sales have been unable to break out because there are simply not enough homes for sale."

Added Yun, "Some of the South region's decline in closings can be attributed to the devastation Hurricane Harvey caused to the greater Houston area. Sales will be impacted the rest of the year in Houston, as well as in the most severely affected areas in Florida from Hurricane Irma. However, nearly all of the lost activity will likely show up in 2018."

Total housing inventory at the end of August declined 2.1 percent to 1.88 million existing homes available for sale, and is now 6.5 percent lower than a year ago (2.01 million) and has fallen year-over-year for 27 consecutive months. Unsold inventory is at a 4.2-month supply at the current sales pace, which is down from 4.5 months a year ago.

"Market conditions continue to be stressful and challenging for both prospective first-time buyers and homeowners looking to trade up," said Yun. "The ongoing rise in home prices is straining the budgets of some of these would-be buyers, and what is available for sale is moving off the market quickly because supply remains minimal in the lower- and mid-price ranges."

First-time buyers were 31 percent of sales in August, which is down from 33 percent in July and is the lowest share since last August (also 31 percent). NAR's 2016 Profile of Home Buyers and Sellers- released in late 2016 - revealed that the annual share of first-time buyers was 35 percent.

According to NAR President William E. Brown, the U.S. housing market continues to recover from the depths of the financial crisis. However, the significant household wealth many homeowners have accumulated in recent years through rising home values could be at risk if any of the proposed tax provisions follow through with attempts to marginalize the mortgage interest deduction and eliminate state and local tax deductions.

"Consumers are smart and know that any attempt to cap or limit the deductibility of mortgage interest is essentially a tax on homeownership and the middle class," said Brown. "A study commissioned by NAR found that under some tax reform proposals, many homeowners with adjusted gross incomes between $50,000 and $200,000 would see an average tax increase of $815, along with home values shrinking by an average of more than 10 percent. An even steeper decline would be seen in areas with higher property and state income taxes. Congress must keep homeowners in mind as it looks towards tax reform this year."

Single-family home sales decreased 2.1 percent to a seasonally adjusted annual rate of 4.74 million in August from 4.84 million in July, but are still 0.4 percent above the 4.72 million pace a year ago. The median existing single-family home price was $255,500 in August, up 5.6 percent from August 2016.

Existing condominium and co-op sales climbed 1.7 percent to a seasonally adjusted annual rate of 610,000 units in August, but are still 1.6 percent below a year ago. The median existing condo price was $237,600 in August, which is 5.4 percent above a year ago. 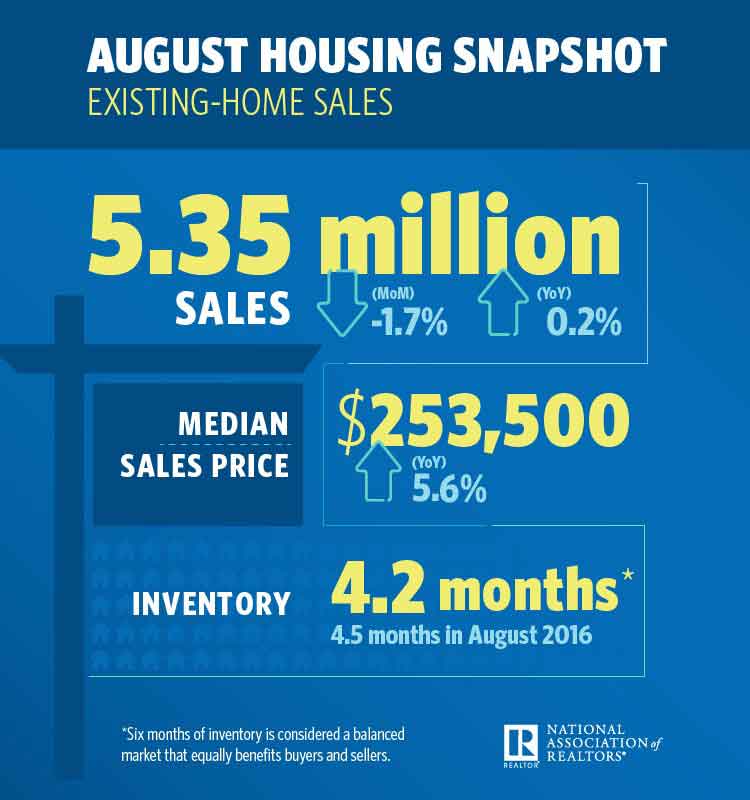