According to the National Association of Realtors, existing-home sales receded in September 2019 following two consecutive months of increases. Each of the four major regions witnessed sales drop off last month, with the Midwest absorbing the brunt of those declines.

Total existing-home sales, completed transactions that include single-family homes, townhomes, condominiums and co-ops, fell 2.2% from August to a seasonally adjusted annual rate of 5.38 million in September. Despite the decline, overall sales are up 3.9% from a year ago (5.18 million in September 2018).

Lawrence Yun, NAR's chief economist, said that despite historically low mortgage rates, sales have not commensurately increased, in part due to a low level of new housing options. "We must continue to beat the drum for more inventory," said Yun, who has called for additional home construction for over a year. "Home prices are rising too rapidly because of the housing shortage, and this lack of inventory is preventing home sales growth potential."

Total housing inventory at the end of September sat at 1.83 million, approximately equal to the amount of existing-homes available for sale in August, but a 2.7% decrease from 1.88 million one year ago. Unsold inventory is at a 4.1-month supply at the current sales pace, up from 4.0 months in August and down from the 4.4-month figure recorded in September 2018.

As the share of first-time buyers rose, individual investors or second-home buyers, who account for many cash sales, purchased 14% of homes in September 2019, unchanged from August but down from 16% recorded last September. All-cash sales accounted for 17% of transactions in September, down from 19% in August and 21% in September 2018.

Distressed sales - foreclosures and short sales - represented 2% of sales in September, unchanged from August but down from 3% in September 2018.

"For families on the sidelines thinking about buying a home, current rates are making the climate extremely favorable in markets across the country," said NAR President John Smaby. "These traditionally low rates make it that much easier to qualify for a mortgage, and they also open up various housing selections to buyers everywhere."

"Mortgage rates under 4% are amazingly attractive for homebuyers," said Yun. "The rise in foot traffic as evidenced by the open rates of SentriLock key boxes shows growing buyer interest."

Existing condominium and co-op sales were recorded at a seasonally adjusted annual rate of 600,000 units in September, 1.7% above the previous month and 3.4% higher than a year ago. The median existing condo price was $248,600 in September, which is an increase of 4.5% from a year ago.

As noted, existing-home sales in September dropped in every region compared to the month prior. Compared to last year, September sales increased in three of the four major regions, while neither growing nor declining in the Midwest. Median home prices in every region increased from one year ago. 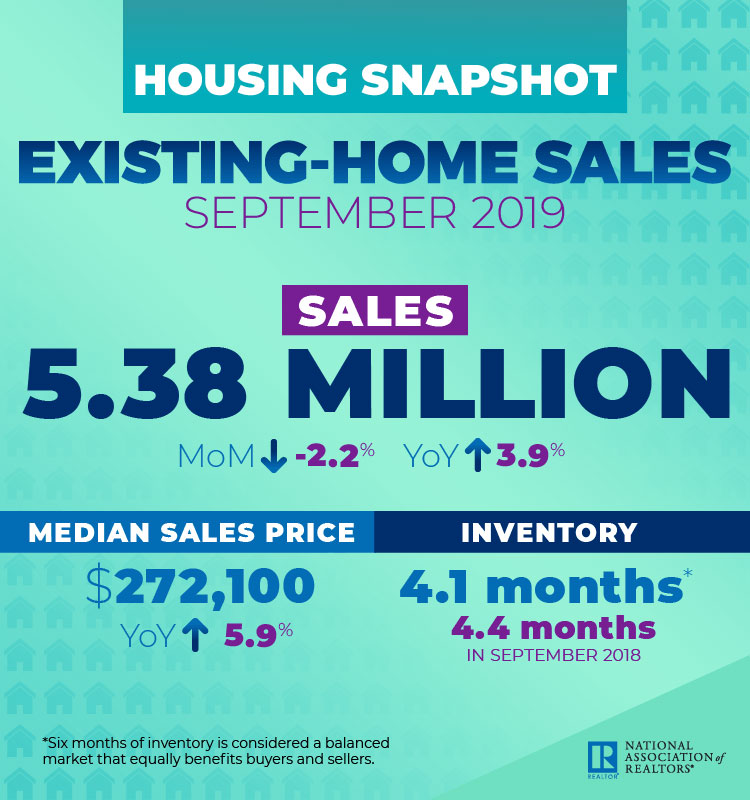