Total existing-home sales completed transactions that include single-family homes, townhomes, condominiums and co-ops, increased 4.3% from September to a seasonally-adjusted annual rate of 6.85 million in October. Overall, sales rose year-over-year, up 26.6% from a year ago (5.41 million in October 2019).

"Considering that we remain in a period of stubbornly high unemployment relative to pre-pandemic levels, the housing sector has performed remarkably well this year," said Lawrence Yun, NAR's chief economist.

"The surge in sales in recent months has now offset the spring market losses," he said. "With news that a COVID-19 vaccine will soon be available, and with mortgage rates projected to hover around 3% in 2021, I expect the market's growth to continue into 2021." Yun forecasts existing-home sales to rise by 10% to 6 million in 2021.

Total housing inventory at the end of October totaled 1.42 million units, down 2.7% from September and down 19.8% from one year ago (1.77 million). Unsold inventory sits at an all-time low 2.5-month supply at the current sales pace, down from 2.7 months in September and down from the 3.9-month figure recorded in October 2019.

"Homebuilders' confidence has soared even though the actual production has not," Yun said. "All measures, such as reduction to lumber tariffs and expansion of vocational training, need to be considered to significantly boost supply and construct new housing."

First-time buyers were responsible for 32% of sales in October, up from the 31% in both September 2020 and October 2019. NAR's 2020 Profile of Home Buyers and Sellers - released last week - revealed that the annual share of first-time buyers was 31%.

Distressed sales - foreclosures and short sales - represented less than 1% of sales in October, equal to September's percentage but down from 2% in October 2019.

"Faced with many uncertainties in 2020, the real estate industry has been able to meet surprisingly strong homebuying demand and help lead our country's economic recovery," said NAR President Charlie Oppler. "As we continue to help consumers secure housing and property, we will also remain vigilant in working to expand housing options, equality and affordability for all who are entering the marketplace."

Existing condominium and co-op sales were recorded at a seasonally-adjusted annual rate of 730,000 units in October, up 5.8% from September and up 25.9% from one year ago. The median existing condo price was $273,600 in October, an increase of 10.3% from a year ago.

Median home prices increased at double-digit rates in each of the four major regions from one year ago. 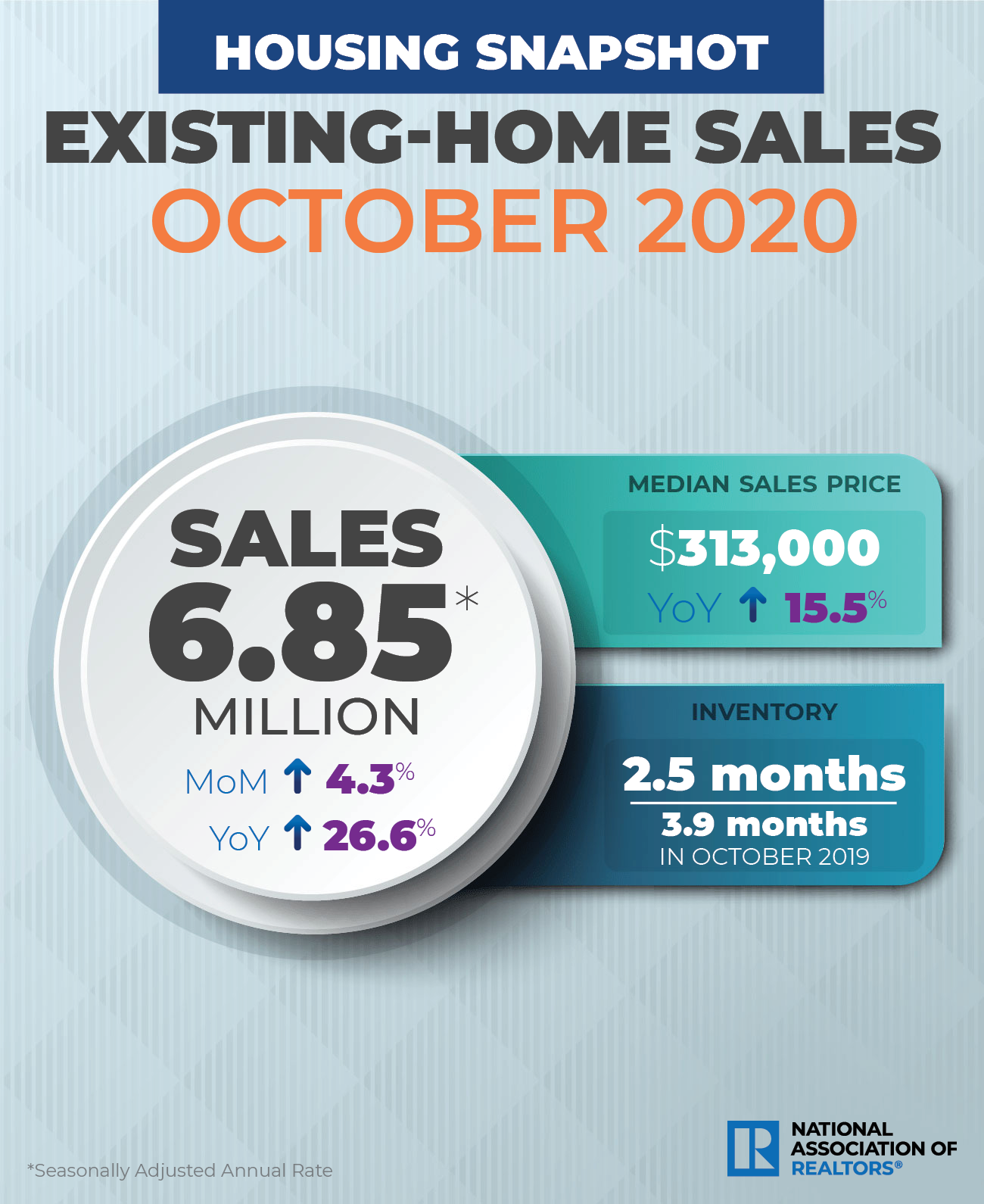