Existing-home sales rose in November, denoting three consecutive months of increases, according to the National Association of Realtors. Three of the four major U.S. regions reported growth in monthly sales, while the fourth region held steady in November. From a year-over-year perspective, only one region experienced a rise in sales as the three others saw home sales decline.

Total existing-home sales, completed transactions that include single-family homes, townhomes, condominiums and co-ops, grew 1.9% from October to a seasonally adjusted annual rate of 6.46 million in November. Sales fell 2.0% from a year ago (6.59 million in November 2020).

"Determined buyers were able to land housing before mortgage rates rise further in the coming months," said Lawrence Yun, NAR's chief economist. "Locking in a constant and firm mortgage payment motivated many consumers who grew weary of escalating rents over the last year.

"Mortgage rates are projected to jump in 2022, however, I don't expect the imminent increase to be overly dramatic."

Total housing inventory at the end of November amounted to 1.11 million units, down 9.8% from October and down 13.3% from one year ago (1.28 million). Unsold inventory sits at a 2.1-month supply at the current sales pace, a decline from both the prior month and from one year ago.

The median existing-home price for all housing types in November was $353,900, up 13.9% from November 2020 ($310,800), as prices increased in each region, with the highest pace of appreciation in the South region. This marks 117 straight months of year-over-year increases, the longest-running streak on record.

"Supply-chain disruptions for building new homes and labor shortages have hindered bringing more inventory to the market," said Yun. "Therefore, housing prices continue to march higher due to the near record-low supply levels."

Yun noted that inflation and the pace of price appreciation are expected to subside next year. Last week, NAR held its third annual Real Estate Forecast Summit, featuring economists and housing experts whose consensus found inflation would likely ease in 2022 at a 4% rate, while home prices are expected to rise at a moderate pace of 5.7%.

First-time buyers were responsible for 26% of sales in November, down from 29% in October and from 32% in November 2020. NAR's 2021 Profile of Home Buyers and Sellers - released last month - reported that the annual share of first-time buyers was 34%.

Distressed sales - foreclosures and short sales - represented less than 1% of sales in November, equal to the percentage seen a month prior and equal to November 2020.

Existing condominium and co-op sales were recorded at a seasonally adjusted annual rate of 710,000 units in November, up 4.4% from 680,000 in October and equal to one year ago. The median existing condo price was $283,200 in November, an annual increase of 4.4%.

Existing-home sales in the Northeast were flat compared to the prior month, neither climbing or falling in November, and recorded an annual rate of 760,000, which is an 11.6% decrease from November 2020. The median price in the Northeast was $372,500, up 4.7% from one year ago. 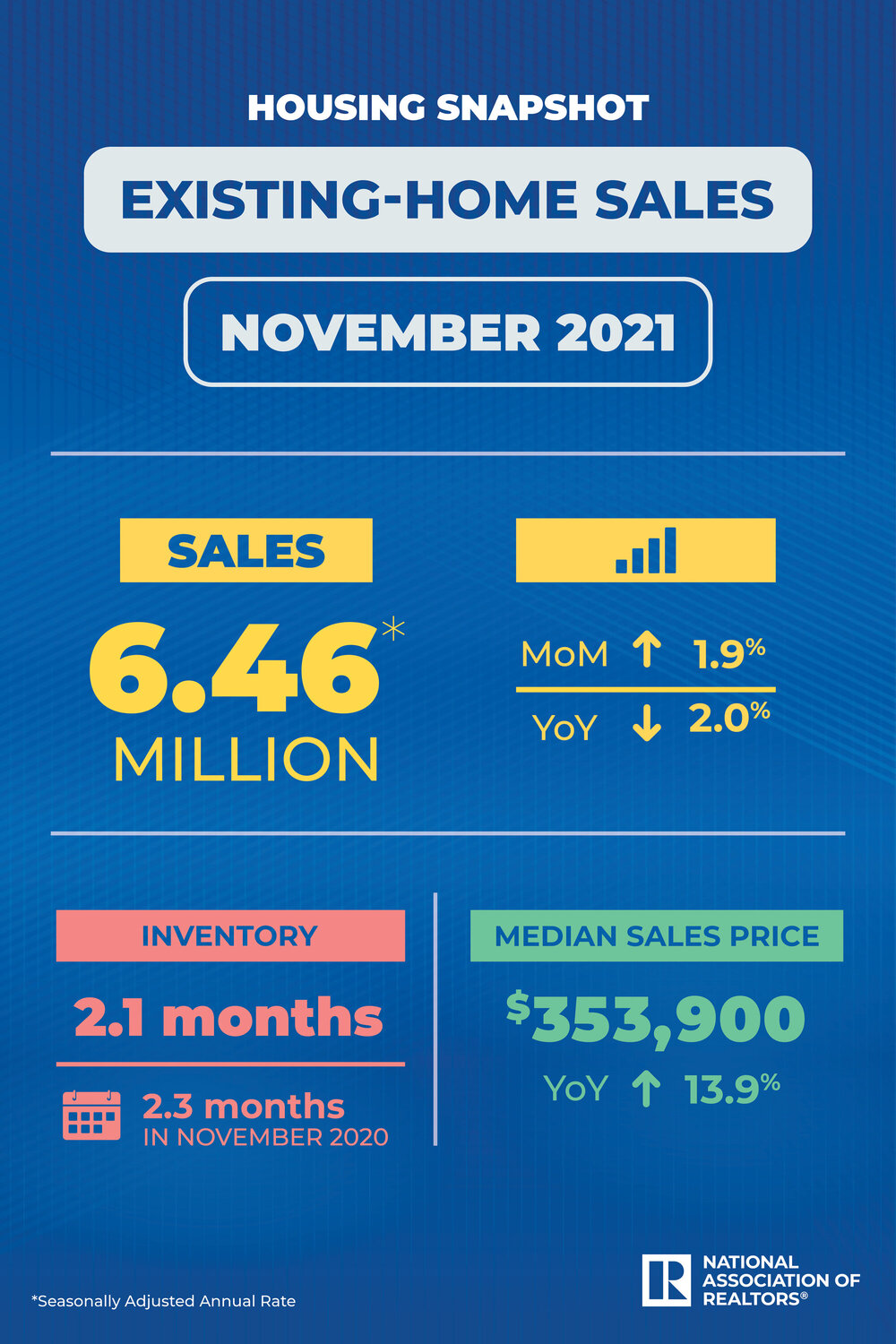