According to the National Association of Realtors, existing-home sales fell in November 2019, taking a small step back after October's gains. The Northeast and Midwest both reported growth last month, while the South and West saw sales decline.
Total existing-home sales, completed transactions that include single-family homes, townhomes, condominiums and co-ops, decreased 1.7% from October to a seasonally-adjusted annual rate of 5.35 million in November. However, sales are up 2.7% from a year ago (5.21 million in November 2018).

Lawrence Yun, NAR's chief economist, said the decline in sales for November is not a cause for worry. "Sales will be choppy when inventory levels are low, but the economy is otherwise performing very well with more than 2 million job gains in the past year," said Yun.

Total housing inventory at the end of November totaled 1.64 million units, down approximately 7.3% from October and 5.7% from one year ago (1.74 million). Unsold inventory sits at a 3.7-month supply at the current sales pace, down from 3.9 months in October and from the 4.0-month figure recorded in November 2018. Unsold inventory totals have declined for five consecutive months, constraining home sales.

"The new home construction seems to be coming to the market, but we are still not seeing the amount of construction needed to solve the housing shortage," Yun said. "It is time for builders to be innovative and creative, possibly incorporating more factory-made modules to make houses affordable rather than building homes all on-site."

First-time buyers were responsible for 32% of sales in November, essentially hovering at the 31% seen in October and 33% in November 2018. NAR's 2019 Profile of Home Buyers and Sellers - released in late 2019 - revealed that the annual share of first-time buyers was 33%.

Distressed sales - foreclosures and short sales - represented 2% of sales in November, unchanged from both October 2019 and November 2018.

Yun cited last week's NAR Real Estate Forecast Summit, in which 14 leading housing and financial industry economists predicted that the U.S. will likely avoid a recession in 2020 while projecting the economy to grow 2% in the coming year.

"The consensus was that mortgage rates may rise, but only incrementally," Yun said. "I expect to see home price affordability improvements, too. This year we witnessed housing costs grow faster than income, but the expectation is for prices to settle at a more reasonable level in the coming year in line with average hourly wage growth of 3% on a year-over-year basis."

Additionally, the majority of the economists - 69% - did not anticipate an increase in the federal funds rate, while 31% expect the Federal Open Market Committee will lower the rate next year. The group predicted an average annual 30-year fixed mortgage rate of 3.8% and home prices (existing and new homes) to increase at a slower rate of 3.6%.

By all accounts, low mortgage rates have propped up buyer interest. SentriLock Foot Traffic Index, a measure of home showings, was stable at 47.1 in November compared to October. The Realtors Buyer Traffic Index compiled from a survey of Realtors was essentially unchanged at 56 from 55 in October and is up from 44 one year ago.

Existing condominium and co-op sales were recorded at a seasonally adjusted annual rate of 560,000 units in November, down 5.1% from October and 3.4% lower than a year ago. The median existing condo price was $248,200 in November, which is an increase of 4.5% from a year ago. 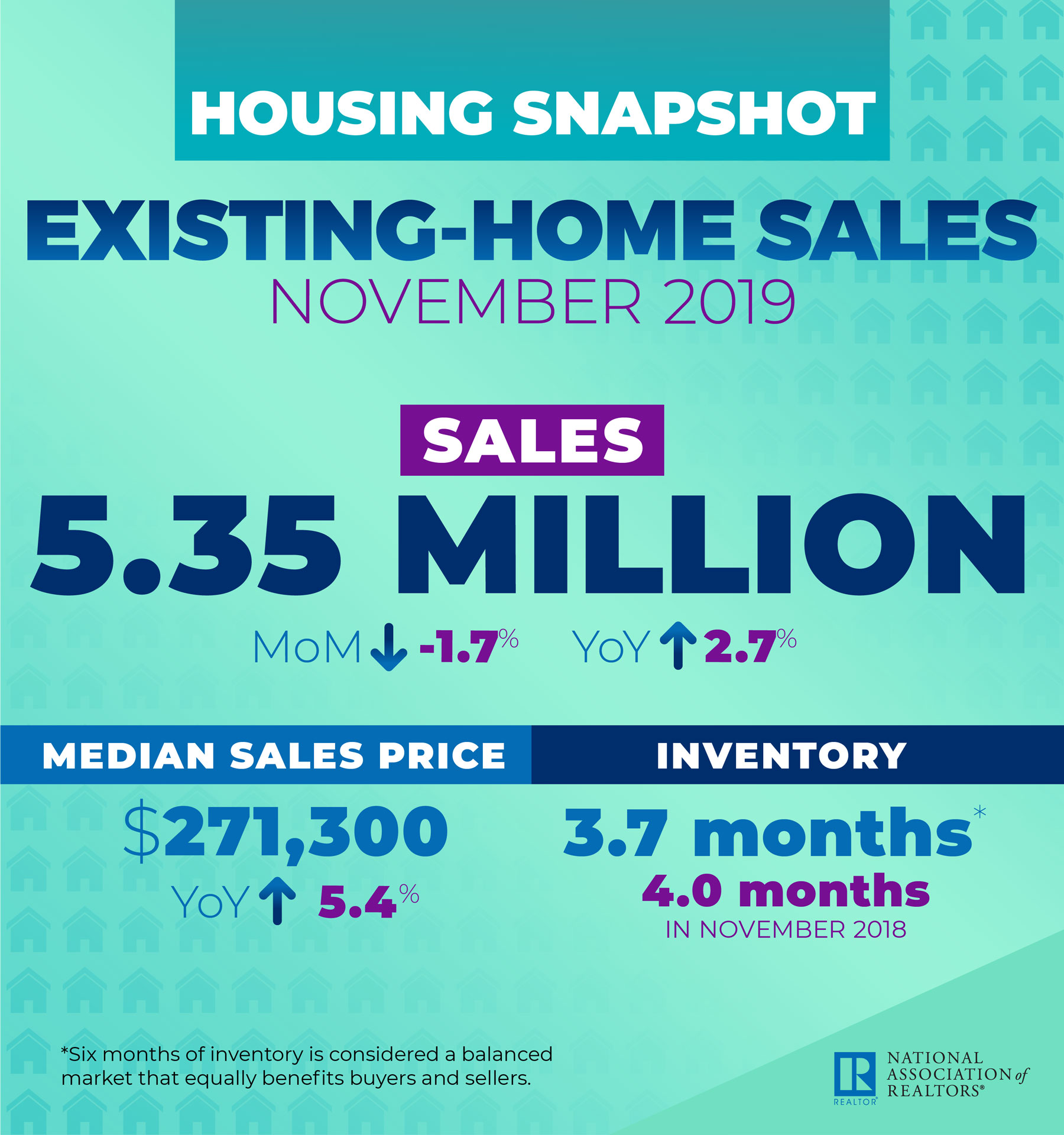