According to the National Association of Realtors, existing-home sales rebounded at a record pace in June 2020, showing strong signs of a market turnaround after three straight months of sales declines caused by the ongoing pandemic. Each of the four major regions achieved month-over-month growth, with the West experiencing the greatest sales recovery.

Total existing-home sales, completed transactions that include single-family homes, townhomes, condominiums and co-ops, jumped 20.7% from May to a seasonally-adjusted annual rate of 4.72 million in June. Sales overall, however, dipped year-over-year, down 11.3% from a year ago (5.32 million in June 2019).

"The sales recovery is strong, as buyers were eager to purchase homes and properties that they had been eyeing during the shutdown," said Lawrence Yun, NAR's chief economist. "This revitalization looks to be sustainable for many months ahead as long as mortgage rates remain low and job gains continue."

Yun explains that significantly low inventory was a problem even before the pandemic and says such circumstances can lead to inflated costs.

"Home prices rose during the lockdown and could rise even further due to heavy buyer competition and a significant shortage of supply."

Yun's concerns are underscored in NAR's recently released 2020 Member Profile, in which Realtors point to low inventory as being one of the top hindrances for potential buyers.

Distressed sales - foreclosures and short sales - represented 3% of sales in June, about even with May but up from 2% in June 2019.

"It's inspiring to see Realtors absorb the shock and unprecedented challenges of the virus-induced shutdowns and bounce back in this manner," said NAR President Vince Malta. "NAR and our 1.4 million members will continue to tirelessly work to facilitate our nation's economic recovery as we all adjust to this new normal."

The Mortgage Bankers Assocation Chief Economist Mike Fratantoni also commented on NAR's June housing data saying, "MBA's data has shown a sharp rebound in mortgage purchase applications once states started reopening in May, with activity now surpassing year-ago levels for nine straight weeks. It is thus no surprise that existing-home sales, which are recorded at closing, picked up in June to their highest level since March. We continue to highlight the extraordinarily low level of housing inventory, both in terms of the absolute number of properties on the market, as well as months' supply. Constrained supply will continue to support home prices in the months ahead, while also making it challenging for some would-be buyers to reach the market. Record-low mortgage rates should keep demand strong, even as the unemployment rate remains extremely elevated."

"Home buyers considering a move to the suburbs is a growing possibility after a decade of urban downtown revival," Yun said. "Greater work-from-home options and flexibility will likely remain beyond the virus and any forthcoming vaccine."

In a complete reversal of the month prior, sales for June increased in every region. Median home prices grew in each of the four major regions from one year ago. 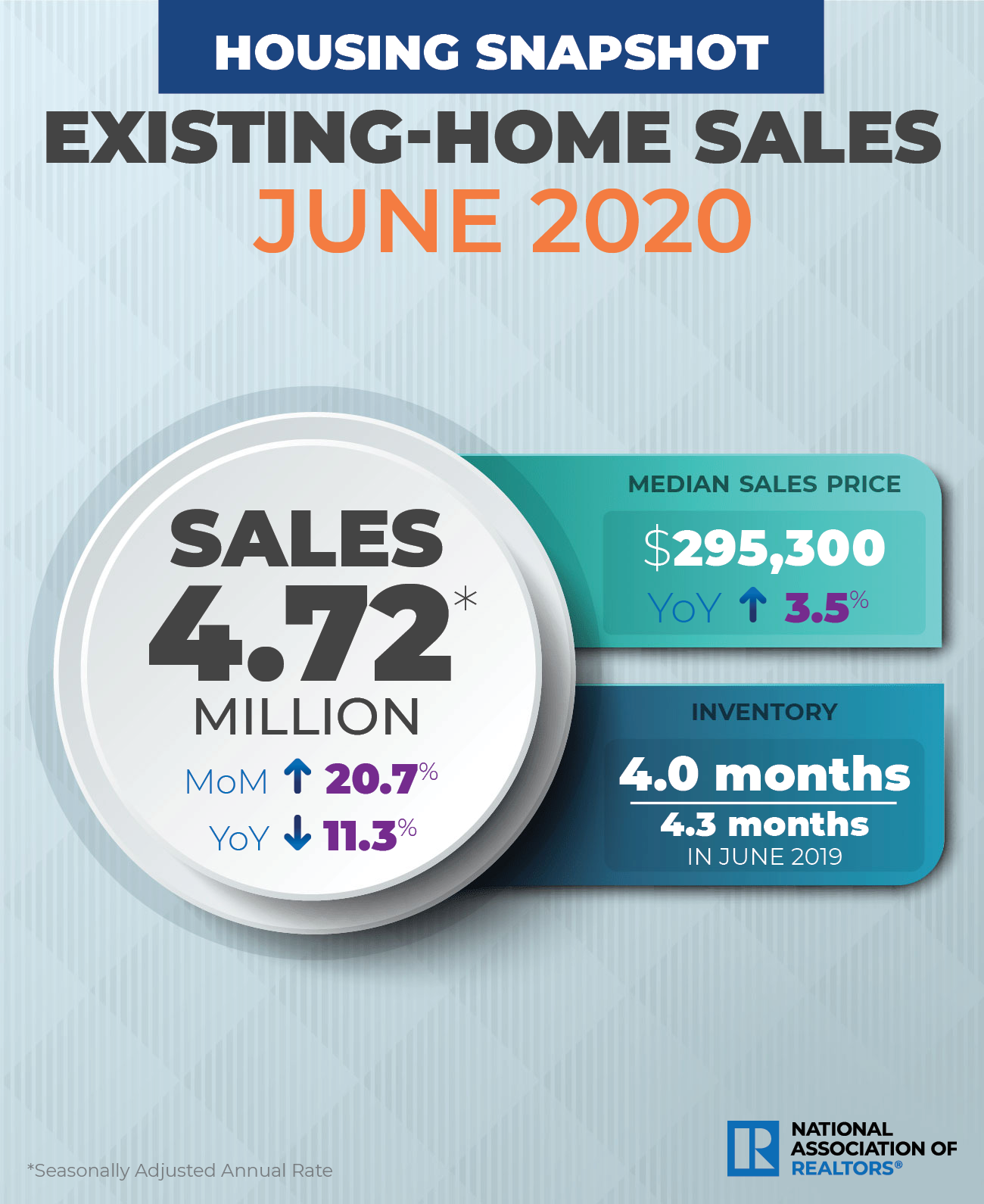