According to the National Association of Realtors, existing-home sales in the U.S. experienced another dip in August 2022, marking the seventh consecutive month of declines.

Month-over-month sales varied across the four major U.S. regions as two regions recorded increases, one was unchanged and the other posted a drop. On a year-over-year basis, however, sales fell in all regions.

Total existing-home sales, completed transactions that include single-family homes, townhomes, condominiums and co-ops, notched a minor contraction of 0.4% from July to a seasonally adjusted annual rate of 4.80 million in August. Year-over-year, sales faded by 19.9% (5.99 million in August 2021).

"The housing sector is the most sensitive to and experiences the most immediate impacts from the Federal Reserve's interest rate policy changes," said NAR Chief Economist Lawrence Yun. "The softness in home sales reflects this year's escalating mortgage rates. Nonetheless, homeowners are doing well with near nonexistent distressed property sales and home prices still higher than a year ago."

Total housing inventory registered at the end of August was 1,280,000 units, a decrease of 1.5% from July and unchanged from the previous year. Unsold inventory sits at a 3.2-month supply at the current sales pace - identical to July and up from 2.6 months in August 2021.

"Inventory will remain tight in the coming months and even for the next couple of years," Yun added. "Some homeowners are unwilling to trade up or trade down after locking in historically-low mortgage rates in recent years, increasing the need for more new-home construction to boost supply."

The median existing-home price for all housing types in August was $389,500, a 7.7% jump from August 2021 ($361,500), as prices ascended in all regions. This marks 126 consecutive months of year-over-year increases, the longest-running streak on record. However, it was the second month in a row that the median sales price retracted after reaching a record high of $413,800 in June, the usual seasonal trend of prices declining after peaking in the early summer.

First-time buyers were responsible for 29% of sales in August, consistent with July 2022 and August 2021. NAR's 2021 Profile of Home Buyers and Sellers - released in late 2021 - reported that the annual share of first-time buyers was 34%.

All-cash sales accounted for 24% of transactions in August, the same share as in July, but up from 22% in August 2021.

Individual investors or second-home buyers, who make up many cash sales, purchased 16% of homes in August, up from 14% in July and 15% in August 2021.

Existing condominium and co-op sales were recorded at a seasonally adjusted annual rate of 520,000 units in August, up 4.0% from July and down 24.6% from one year ago. The median existing condo price was $333,700 in August, an annual increase of 7.8%. 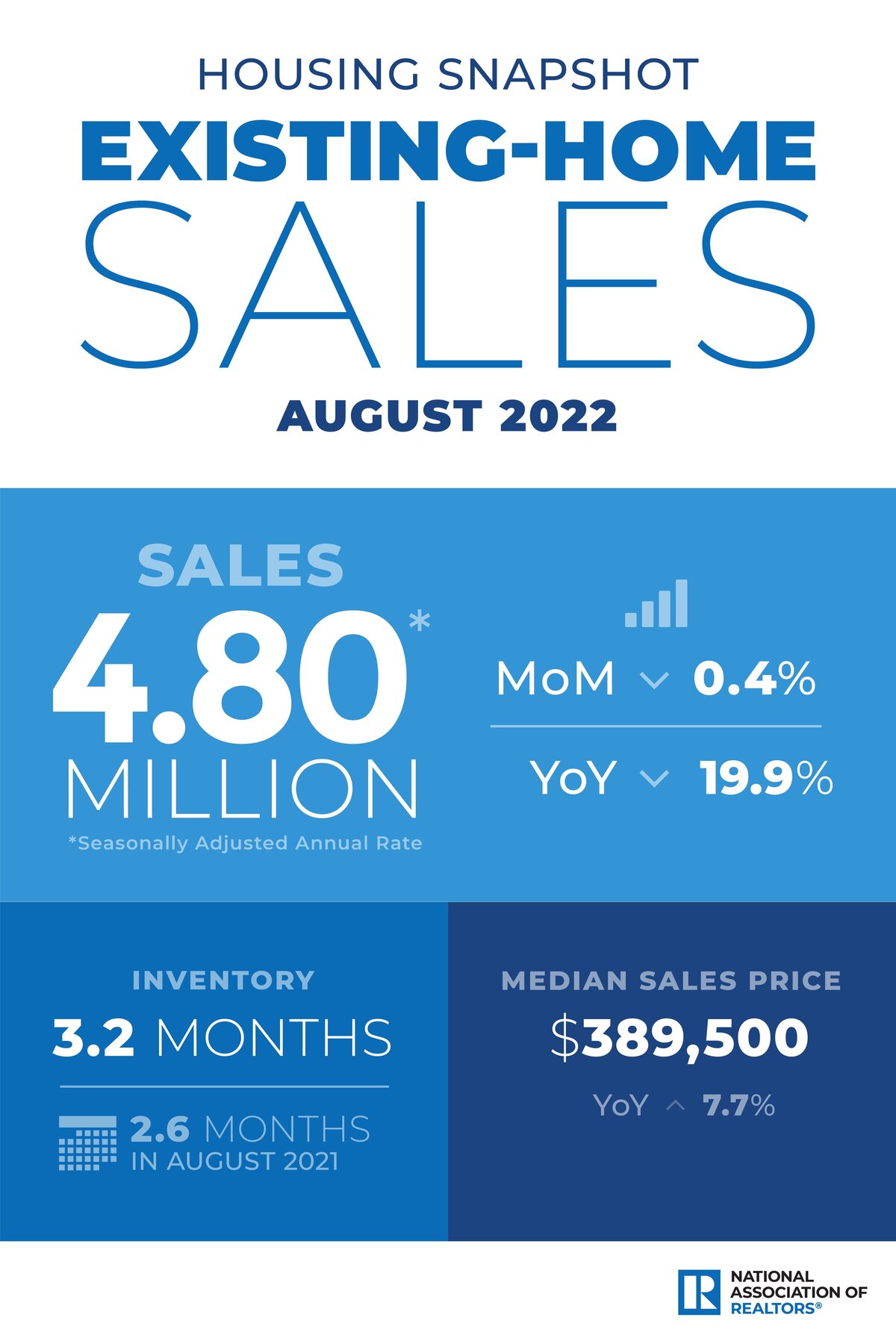