According to the National Association of Realtors, existing-home in the U.S. sales fell in May 2020, marking a three-month decline in sales as a result of the coronavirus outbreak. Each of the four major regions witnessed dips in month-over-month and year-over-year sales, with the Northeast experiencing the greatest month-over-month drop.
Total existing-home sales, completed transactions that include single-family homes, townhomes, condominiums and co-ops, slumped 9.7% from April to a seasonally-adjusted annual rate of 3.91 million in May. Overall, sales fell year-over-year, down 26.6% from a year ago (5.33 million in May 2019).

"Sales completed in May reflect contract signings in March and April - during the strictest times of the pandemic lockdown and hence the cyclical low point," said Lawrence Yun, NAR's chief economist. "Home sales will surely rise in the upcoming months with the economy reopening, and could even surpass one-year-ago figures in the second half of the year."

"New home construction needs to robustly ramp up in order to meet rising housing demand," Yun said. "Otherwise, home prices will rise too fast and hinder first-time buyers, even at a time of record-low mortgage rates."

Distressed sales - foreclosures and short sales - represented 3% of sales in May, about even with April but up from 2% in May 2019.

"Although the real estate industry faced some very challenging circumstances over the last several months, we're seeing signs of improvement and growth, and I'm hopeful the worst is behind us," said NAR President Vince Malta. "NAR, along with our partners and 1.4 million members, are already working to reignite America's real estate industry, which will be a key driver in our nation's economic recovery."

"Relatively better performance of single-family homes in relation to multifamily condominium properties clearly suggest migration from the city centers to the suburbs," Yun said. "After witnessing several consecutive years of urban revival, the new trend looks to be in the suburbs as more companies allow greater flexibility to work from home."

As was the case for the month prior, sales for May decreased in every region from the previous month's levels. Median home prices grew in three of the four major regions from one year ago, falling marginally in the West.

The  Mortgage Bankers Association Chief Economist Mike Fratantoni also commented on NAR's numbers today by saying, "The most noteworthy data point in the May existing-home sales report was that existing housing supply last month was down almost 19% compared to a year ago. As buyers are returning to the market, as evidenced by the strong, nine-week rebound in MBA's purchase application data, the lack of homes for sale will be a real constraint. Although demand certainly dropped in March and April due to the crisis, supply dropped even more, and has thus far kept home prices from declining. We expect that home-price growth will pick up over the summer due to insufficient supply levels.

"The market is supported by strong demand from first-time homebuyers, who represented 34% of home purchases in May. Millennial-driven demand will be a tailwind for the market for the next several years." 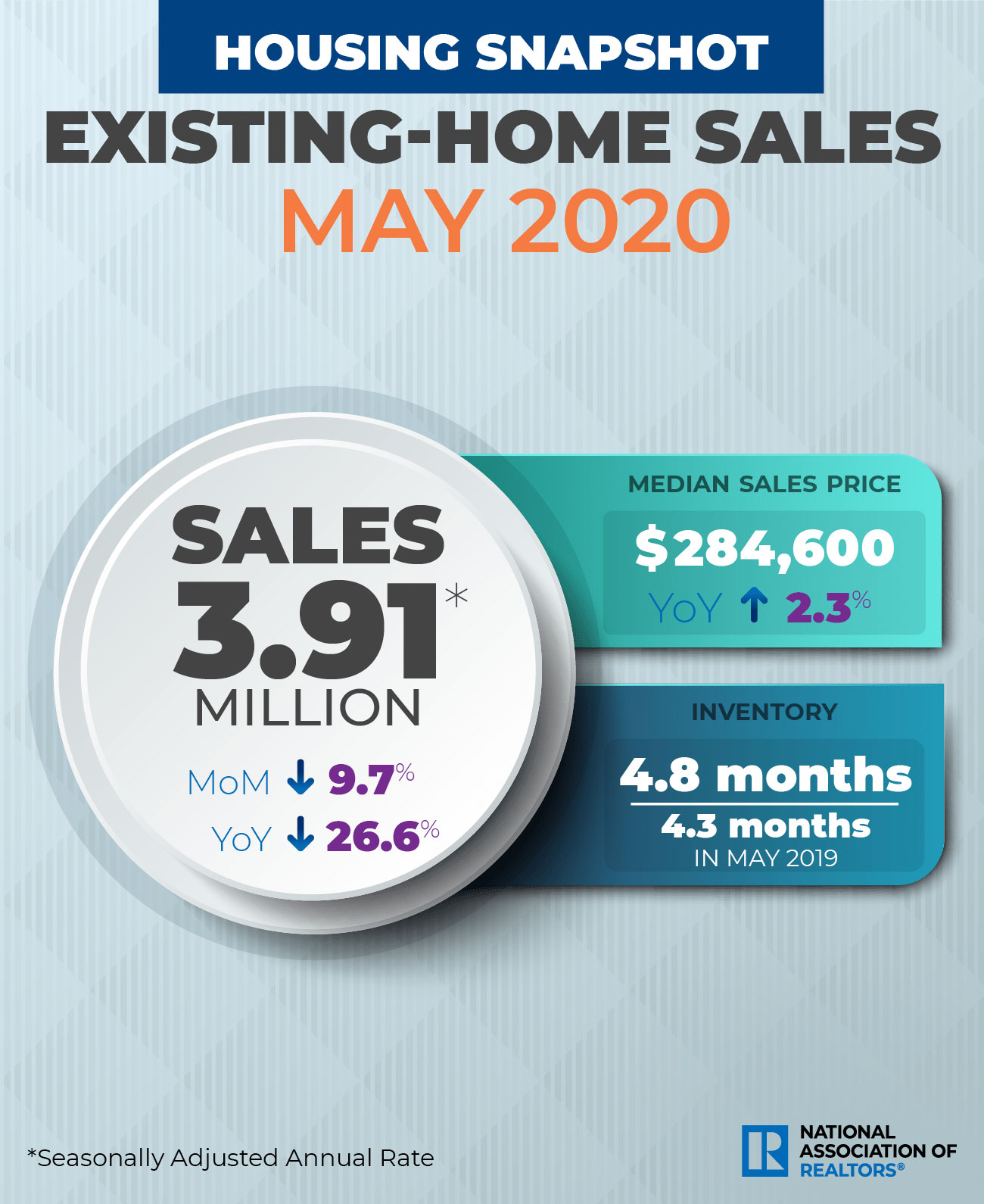