According to the National Association of Realtors, U.S. existing-home sales climbed substantially in February 2020 after a slight decline in January. Of the four major regions, only the Northeast reported a drop in sales, while other areas saw increases, including sizable sales gains in the West.

Total existing-home sales, completed transactions that include single-family homes, townhomes, condominiums and co-ops, rose 6.5% from January to a seasonally-adjusted annual rate of 5.77 million in February. Additionally, for the eighth straight month, overall sales greatly increased year-over-year, up 7.2% from a year ago (5.38 million in February 2019).

"February's sales of over 5 million homes were the strongest since February 2007," said Lawrence Yun, NAR's chief economist. "I would attribute that to the incredibly low mortgage rates and the steady release of a sizable pent-up housing demand that was built over recent years."

Yun noted that February's home sales were encouraging but not reflective of the current turmoil in the stock market or the significant hit the economy is expected to take because of the coronavirus and corresponding social quarantines. "These figures show that housing was on a positive trajectory, but the coronavirus has undoubtedly slowed buyer traffic and it is difficult to predict what short-term effects the pandemic will have on future sales," Yun said.

Total housing inventory at the end of February totaled 1.47 million units, up 5.0% from January, but down 9.8% from one year ago (1.63 million). Unsold inventory sits at a 3.1-month supply at the current sales pace, equal to the supply recorded in January and down from the 3.6-month figure recorded in February 2019.

First-time buyers were responsible for 32% of sales in February, equal to the percentages seen in both January 2020 and in February 2019. NAR's 2019 Profile of Home Buyers and Sellers - released in late 2019 - revealed that the annual share of first-time buyers was 33%.

"For the past couple of months, we have seen the number of buyers grow as more people enter the market," Yun said. "Once the social-distancing and quarantine measures are relaxed, we should see this temporary pause evaporate, and will have potential buyers return with the same enthusiasm."

While offering a definitive forecast is extremely difficult in light of this national and global emergency, Yun says home prices will hold on well. "Unlike the stock market, home prices are not expected to drop because of the on-going housing shortage and due to homes getting delisted during this time of crisis," he said.

Distressed sales - foreclosures and short sales - represented 2% of sales in February, unchanged from January and down from February 2019.

"In the midst of this national emergency, NAR has been and will continue to be in contact with Congressional leaders and White House officials as they consider various policies to ease the economic impact of the coronavirus," said NAR President Vince Malta, broker at Malta & Co., Inc., in San Francisco, Calif. "NAR is engaged in these discussions and presenting proposals that will support real estate and the people that make up the industry."

"It is truly inspiring to see so many of our fellow Realtors and brokerages adjust on the fly," Malta continued. "Agents nationwide are keeping interest alive with innovative technologies, holding virtual open houses and computer-generated tours."

Existing condominium and co-op sales were recorded at a seasonally adjusted annual rate of 600,000 units in February, about even with January's sales, but 7.1% higher than a year ago. The median existing condo price was $249,900 in February, an increase of 7.0% from a year ago.

Compared to the month prior, February sales increased in the Midwest, the South and the West, while year-over-year sales are up in each of the four regions. Median home prices in all regions increased from one year ago, with the Northeast and South regions showing the strongest price gains. 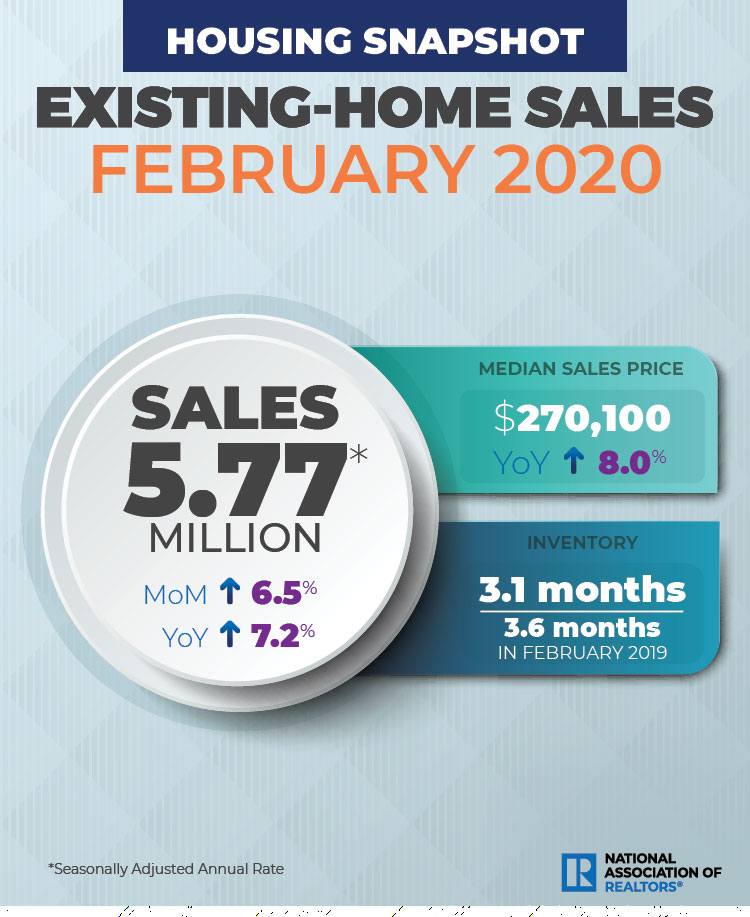