According to the National Association of Realtors, pending home sales in the U.S. took a step backward in January 2021 as inventory constraints continue to hold back prospective buyers.

The South was the lone region with a modest gain from the month prior, while the other three major U.S. regions experienced month-over-month decreases in January. However, all four areas saw contract transactions increase from a year-over-year standpoint, including two regions reaching double-digit gains, spurring an all-time high for pending home sales in the month of January.

The Pending Home Sales Index, a forward-looking indicator of home sales based on contract signings, dropped 2.8% to 122.8 in January 2021. Year-over-year, contract signings rose 13.0%. An index of 100 is equal to the level of contract activity in 2001.

"Pending home sales fell in January because there are simply not enough homes to match the demand on the market," said Lawrence Yun, NAR's chief economist. "That said, there has been an increase in permits and requests to build new homes."

There has been a consistent rise in housing permits for single-family homes for eight straight months. According to Yun, this is a good sign that the supply and demand imbalance in the residential real estate market could be easing, as soon as mid-2021.

"There will also be a natural seasonal upswing in inventory in spring and summer after few new listings during the winter months," he said. "These trends, along with an anticipated ramp-up in home construction will provide for much-needed supply."

Realtor.com's Housing Market Recovery Index, which reveals metro areas where the market has recovered or even exceeded prior trends, showed Austin, Texas; Denver, Colo.; San Antonio, Texas; Riverside, Calif.; and Sacramento, Calif., had enjoyed the most significant recovery as of February 13.

Following a week where January's existing-home sales increased, Yun noted that pending contracts are a great early indicator for upcoming closed sales, but stressed that the timing of the relationship between existing-home sales and pending home sales may not be in lockstep.

"The two measurements aren't always perfectly correlated due to varying amounts of time required to close a contract," Yun said. "This is because a number of fallouts can occur due to a variety of factors, including a buyer not obtaining mortgage financing, a problem with a home inspection, or an appraisal issue."

The economy is showing promising signs of improvement, according to Yun, especially in light of many millions of Americans already receiving a COVID-19 vaccination. Still, he cautioned that longer-term interest rates will soon rise, partly from the better economic prospects, but also due to rising inflationary expectations and higher budget deficits.

"I don't foresee mortgage rates jumping to an alarming level, but we should prepare for a rise of at least a decimal point or two," he said.

The Mortgage Bankers Association's AVP of Economic and Industry Forecasting Joel Kan also commented, "Despite a slowdown in January, pending home sales remained 13 percent higher than a year ago, which points to continuing strength in the housing market. The monthly ebbs and flows are a result of the low availability of homes for sale.

"The housing market is very competitive right now, with buyers seeing limited options and faster home-price growth. Various other data sources have pointed to higher median sales prices and record-high purchase mortgage loan sizes, all of which have started to create affordability challenges in many parts of the country. While home building has picked up to attempt to meet the high demand, increased listings of existing homes will be needed in the coming months to alleviate this shortage of housing inventory." 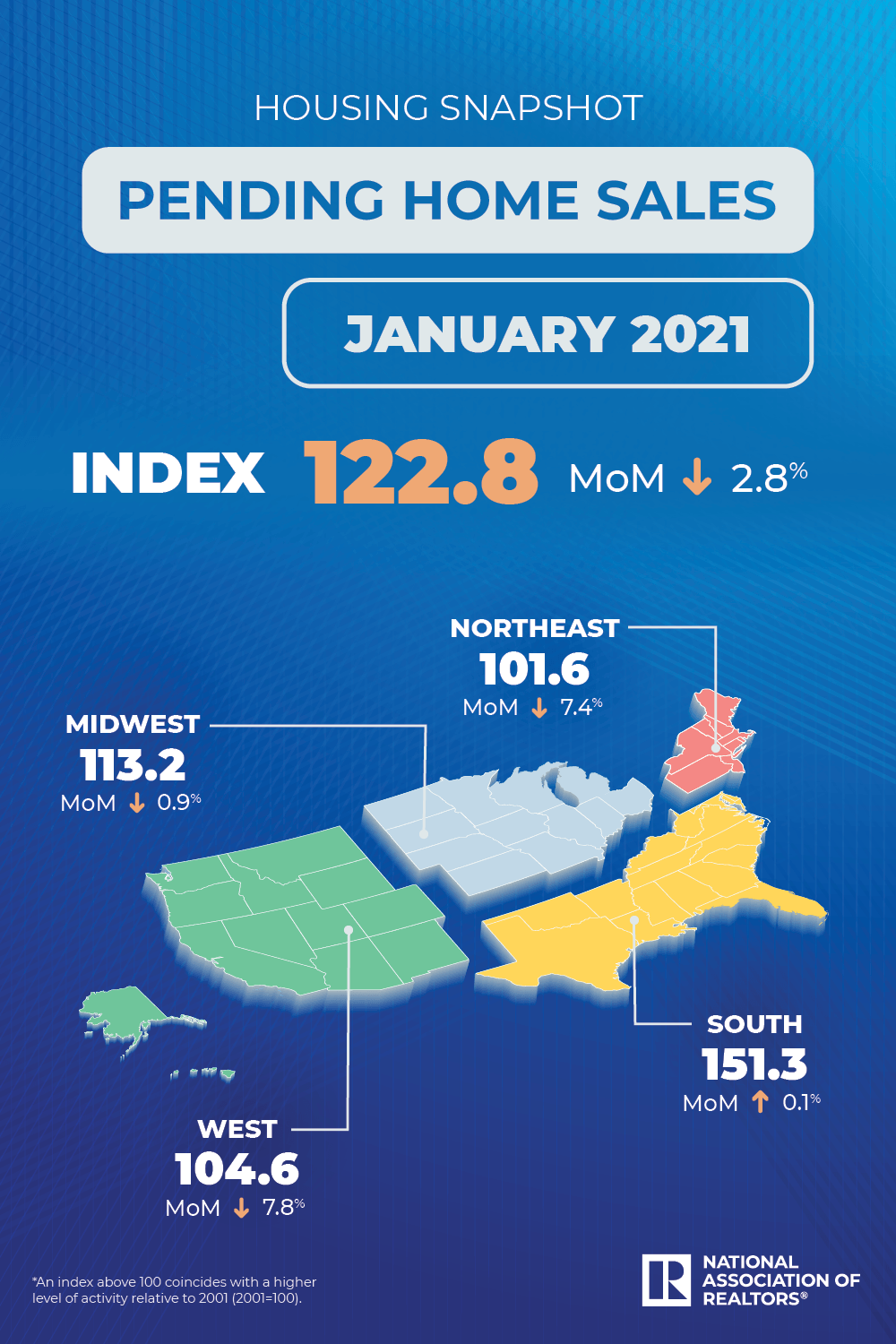