CBRE's latest report--which analyzes the outlook and appetite of the region's real estate investors--reveals that while Asia Pacific investors are less willing to invest more in real estate compared to last year, they do have a stronger appetite for higher risk assets due to the potential return. According to CBRE, 37% of respondents identify 'chasing yield spread' as the main motivation for investing in real estate, compared to 15% in 2016. Without the tailwind of further cap rate compression, the emphasis on capital appreciation has weakened. 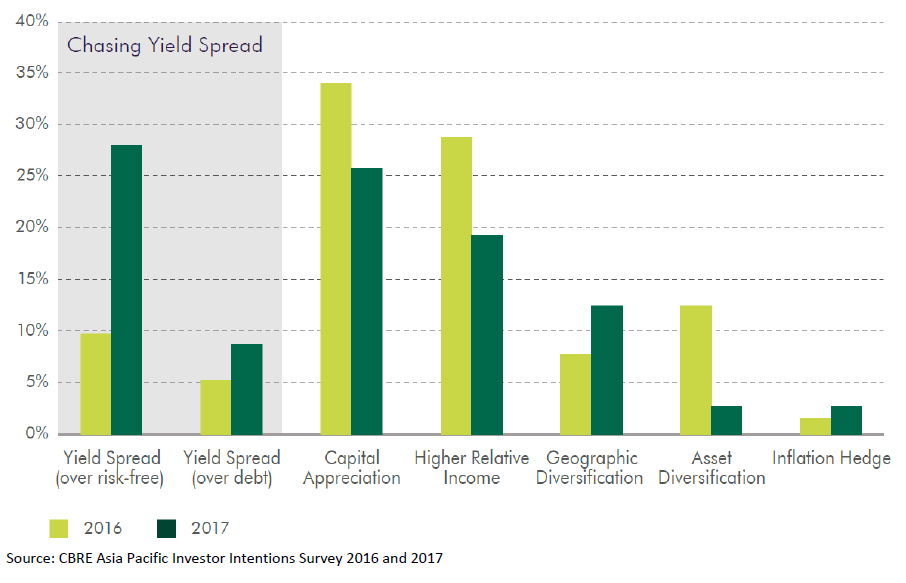 Global and regional economic worries are still the key concern for overall investors but worries have eased compared to last year's survey--only 25% in 2017 to 2016's 46%. In contrast, a higher number of respondents identified faster-than-expected interest rate hikes as a threat--up from 6% to 14%. Investors are resigned to the fact that the zero or low interest rate policy era is gone for now. Overpricing returned as the second-biggest investor concern amid fears that valuations could come under pressure, either from leasing weakness or cap rate expansion.

Sovereign wealth, insurance and pension funds (SWIPe) are more likely to invest for capital appreciation over yield spread, shifting their investment strategy towards more opportunistic investments such as build-to-core. The majority of SWIPe respondents indicated they plan to deploy between $2-5 billion of capital this year, while a few intend to deploy in excess of $5 billion. This indicates that many, if not most, of the large deals in the region this year will involve SWIPes.

"The pursuit of higher yield is pushing investors towards a core-plus strategy, which means investing in prime assets in non-core areas, or non-prime assets in core areas. The greater risk tolerance in exchange for higher potential returns is similarly reflected by the shift from value-add to opportunistic strategies, as the lack of prime assets for sale prompts more investors to take on development or redevelopment risk to build high quality assets," said Robert Fong, Director of Research, CBRE Asia Pacific.

"There is also an increase in the number of investors motivated by geographical diversification, which is mainly driven by international and Asian investors. Asian investors have low allocations to overseas real estate, prompting them to diversify their portfolios," added Mr. Fong.

Breakdown of Market and Sector Interest

Australia, Japan and China retain their status as the top three preferred cross-border investment destinations. Australia was the top choice for the second consecutive year as investors continue to be lured by its attractive risk/return profile and substantial liquidity. Interest in Japan faded amid worries that fundamentals might be peaking along with weaker economic growth. In China, investors' interest is driven by strong economic fundamentals and the opportunity to purchase undervalued assets, however, current market conditions pose a challenge when seeking a positive yield spread.

Elsewhere, interest in Vietnam rose significantly on the back of the country's strong macro fundamentals and higher initial yields. However, investible stock remains limited, and the typical method of entry relies on forming joint-ventures with domestic developers.

Preferred Markets for Investment (Cross-border only) 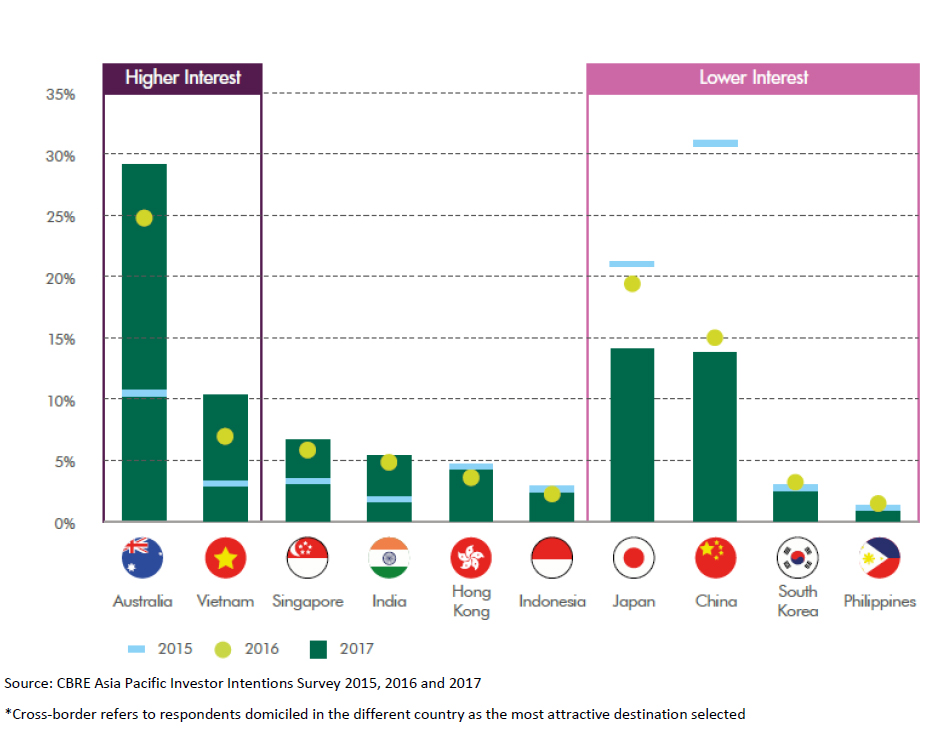 Investor preferences by asset class generally registered minor changes from last year's survey. Noteworthy shifts include stronger interest in the office sector and weaker demand for hotels. Stronger demand for offices reflects the sector's solid liquidity and easier management compared to other sectors. Weaker interest in hotels is largely due to the generally unfavorable supply fundamentals and pricier valuation in key markets such as Japan and Australia.

"Alternative sectors received continued strong interest from investors," commented Tom Moffat, Executive Director, Capital Markets, CBRE Asia. "The biggest increase in interest was in specialty asset classes such as retirement living, senior housing and healthcare, supported by the increase in the region's elderly population and higher health insurance coverage. Demand for data centers is also growing, particularly in Australia, Japan, Hong Kong and Singapore, whilst student housing in Australia has attracted strong demand from institutional investors amid the rapid increase in international students. Outside of Japan, multifamily assets haven't been an established institutional sector in Asia, but we are seeing more investors exploring this strategy, including looking at development deals."

Asia Pacific investors retain a strong interest in outbound investment with most respondents intending to invest around the same amount year-on-year. South Korean investors displayed the strongest intentions to invest abroad, spurred by political uncertainty and weaker economic growth at home, followed by Singapore and Hong Kong. Chinese investors also showed a stronger desire to invest overseas but their volume of investment could moderate following the imposition of stricter capital controls at the end of 2016.

While Asia Pacific investors identified North America as their preferred destination for the second straight year, the survey noted a pivot to developed and emerging Asian markets.

"While outbound interest remains strong, policy uncertainty in the US and Europe will prompt some Asia Pacific-based investors to focus on investing in their own region. This is consistent with the increase in cross-border investment within Asia recorded in 2016. While Australia and Japan continue to be the most sought after locations, emerging Asian markets and in particular Vietnam, registered increasing interest from South Korean, Japanese and Chinese investors," said Mr. Moffat.