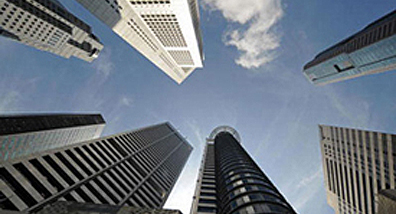 According to the National Association of Realtors (NAR), U.S. commercial real estate vacancy rates are flat and projections for growth have been moderated because economic growth and job creation have been weaker than expected, but modest improvements are expected over the coming year.

Lawrence Yun, NAR chief economist, said the weakening economy will slow the growth in demand for space.  "Disappointing economic growth in recent months means a slower recovery for most of the commercial real estate sectors, although multifamily housing continues to benefit from pent-up demand resulting from an abnormal slowdown in household formation in recent years," he said.  "Many young people, who normally would have struck out on their own from 2008 to 2010, had been doubling up with roommates or moving back into their parents' homes.  However, they've been entering the rental market as new households in stronger numbers this year.  As a result, apartment vacancy rates are declining and rents are rising at faster rates."

Growth in the Gross Domestic Product slowed to 0.4 percent in the first quarter and 1.3 percent in the second quarter, much lower than the 4 to 5 percent expansion needed after a recession.

"A healthy recovery is already occurring in the multifamily sector, with average apartment rent expected to rise 2.5 percent this year and another 3.2 percent in 2012," Yun said.  "Normally, rising rents correspond to rising home prices.  However, this isn't happening in this recovery because buyers are constrained by unnecessarily restrictive mortgage underwriting standards, so the underlying demand isn't drawing inventory down quickly enough to support price growth."

The Society of Industrial and Office Realtors, in its SIOR Commercial Real Estate Index, an attitudinal survey of 266 local market experts, shows an erosion in market conditions.  All regions posted declines except the West.

The SIOR index remains well below the level of 100 that represents a balanced marketplace, but had seen six consecutive quarterly improvements prior to last quarter's decline.  The last time the index was at 100 was in the third quarter of 2007.

Fundamentals are largely unchanged, with vacancy rates relatively flat.  Eight out of 10 respondents said office and industrial leasing activity is below historic levels, and seven out of 10 said asking rents are below a year ago.  It remains a tenant's market, with many tenants benefiting from moderate concessions and rent discounts.

Construction activity is nearly nonexistent in most areas, and it is a buyer's market for development acquisitions.  Local experts said commercial office and industrial prices are below construction costs in 83 percent of markets.

The markets with the lowest office vacancy rates currently are Washington, D.C., with a vacancy rate of 8.6 percent; New York City, at 10.1 percent; and Long Island, N.Y., 13.0 percent.

Office rents are expected to rise 0.8 percent in 2011 and another 1.5 percent next year.  Net absorption of office space in the U.S., which includes the leasing of new space coming on the market as well as space in existing properties, is projected to be 28.3 million square feet this year.

At present, the areas with the lowest industrial vacancy rates are Los Angeles, with a vacancy rate of 5.5 percent; Orange County, Calif., 6.2 percent; and Miami at 8.9 percent.

Annual industrial rent is expected decline 0.9 percent this year before rising 2.0 percent in 2012.  Net absorption of industrial space nationally should be 47.8 million square feet this year.

Average retail rent is forecast to decline 0.4 percent this year, and then rise 0.7 percent in 2012.  Net absorption of retail space is seen at 5.6 million square feet this year.

The apartment rental market - multifamily housing - should see vacancy rates drop from 5.5 percent in the current quarter to 4.6 percent in the third quarter of 2012.  Apartment vacancies below 5 percent generally are considered a landlord's market.

Multifamily net absorption is likely to be 237,700 units this year.