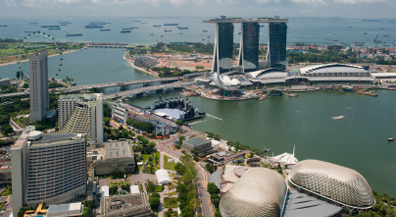 According to Jones Lang LaSalle's new Global Market Perspective report, which assesses the impact of economic forces on the world's major real estate markets quarterly, reveals that despite some economic uncertainties global real estate markets have continued on a resilient recovery path during the second quarter o 2011.

The improvements in market fundamentals continue - overall net absorption is positive, leasing volumes are steady, oversupply is gradually disappearing and prime rents are pushing up as the supply gap for prime assets deepens in many core markets.

"There is no doubt that investors and corporate occupiers are more cautious than three months ago as demand on both sides has been tempered by mounting concerns over sovereign debt and by the pace of future global economic expansion," said Jeremy Kelly of Jones Lang LaSalle's Global Research team. "Nonetheless, we believe that barring significant economic setbacks, the current lull in real estate sentiment is likely to be temporary and global markets will return to a more confident stride in the final months of 2011." 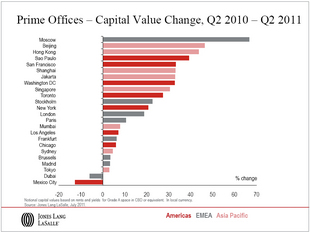 Growth is also expected in the investment markets during the remainder of 2011, and Jones Lang LaSalle now expects full-year 2011 global volumes to exceed its original projection of US$440 billion.

"In the second quarter, we saw global direct investment rise by 50 percent from the US$68.8 billion transacted in 2010 to US$103.5 billion this year," said Arthur de Haast, Head of the International Capital Group at Jones Lang LaSalle. "This activity has supported continued growth in capital values on prime assets, which have increased at an annual rate of 19 percent across 23 top-tier office markets."

While the momentum remains strong, the drivers of growth are shifting.  Some markets, such as the United States, have been surprisingly robust, while others in Europe have faltered, reflecting a lack of product and increasing investor concern about Eurozone sovereign debt contagion.

Russia is the main growth story over the last quarter.  Moscow tops the capital value growth league table and investment volumes are at record levels. 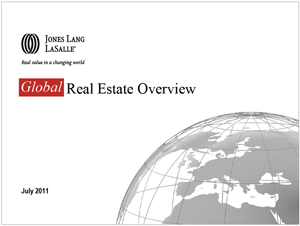 The commercial real estate leasing markets show a mixed picture.  In Asia Pacific net absorption is still at near record levels, but leasing volumes have disappointed in the U.S. and Europe, where economic uncertainty is impacting demand.  The global office vacancy rate stands at 14 percent and is declining steadily. Jones Lang LaSalle expects the rate to fall to 13.3 percent by year end, with development activity in both North America and Europe at a cyclical low.

Corporate occupier demand is particularly buoyant in China and India, while Brazil continues to demonstrate impressive strength in office market fundamentals.  A number of South East Asian markets, such as Jakarta, are also now reappearing on the international radar and registering strong corporate demand.

Jones Lang LaSalle remains bullish on rental growth prospects for the top-tier office hubs, with double-digit uplifts forecast for many markets where the balance is shifting in favour of landlords.  Strongest rental growth for full-year 2011 is projected for Beijing (35-45%), Jakarta and Moscow (30-40%) and Hong Kong (20-30%).