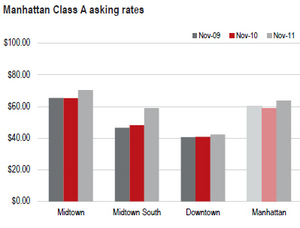 According to a new report by Jones Lang LaSalle, continued global uncertainty as Europe's sovereign debt crisis weighs heavily on the financial markets.

This has already led to a sharp downturn in liquidity across nearly all fixed income sectors, including CMBS. Lenders have struggled to amass enough loans to package into securities as investor demand weakens and the ability to gauge the success of future bond sales becomes increasingly difficult. CMBS issuance will likely end the year at $29 billion, well ahead of 2010 issuance of $11 billion. However, 90 percent of the issuance in 2011 was through September. Taking into account the time lag in bringing a deal to market, CMBS lending was effectively put on hold well before then.

While macro uncertainty will persist through next year, there are positives on the micro level. Commercial real estate fundamentals continue to improve. Transactions volumes have increased, vacancies have declined and landlords have found improved pricing power. The bifurcation between the prime assets and markets versus the Class B/C properties in secondary and tertiary markets will persist, but will hopefully see a narrowing if the global economy sees improvement and greater clarity.

While demand for CMBS has weakened, investor demand for overall commercial real estate risk has remained healthy. According to JPMorgan, total lending this year will be approximately $140 billion, comparable to 2002 levels. Borrowers, however, will rely less on CMBS and more on portfolio companies. Life insurance originations grew by more than 50 percent this year, and currently account for 24 percent of all commercial real estate lending--more than twice their share back in 2002-2003. CMBS issuance in 2012 is not expected to grow beyond 2011 issuance. However, overall lending in 2012 is expected to remain strong, with portfolio lenders taking up a greater share of the pie. 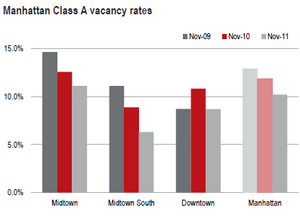 Class A vacancy in Midtown Manhattan decreased in November to 11.1 percent--marking the lowest point since 2008. Credit Agricole renewed at 1301 Avenue of the Americas for the largest transaction of the quarter. Credit Agricole occupies approximately 350,000 square feet. Morgan Lewis renewed and expanded at 101 Park Avenue for 200,000 square feet. In one of the largest new transactions, the law firm Baker & McKenzie signed at 452 Fifth Avenue for 105,000 square feet--driving the vacancy lower at the Penn Station/Garment District submarket.

Despite the decline in vacancy, momentum seems to have slowed since the first half of the year. Class A average asking rents increased marginally for the month to $70.36 per square foot from $70.28 per square foot. The Plaza District retains the title of the highest priced submarket in Manhattan with asking rents of $79.79 per square foot--up 17 percent from the market bottom in first quarter 2010.

Midtown South's Class A vacancy rose to 6.3 percent from 4.6 percent with the addition of a large block at 101 Avenue of the Americas. The shift in vacancy will not likely change market sentiment as the space had already been on the horizon. Midtown South remains the tightest market in the country with an overall vacancy rate of 6.8 percent--up from 6.4 percent in October.

The spike in vacancy rate corresponded with a sharp increase in Class A asking rents from $47.07 per square foot to $58.97 per square foot. The increase was largely because of the addition of new space in Hudson Square, but landlords have been raising rents throughout Midtown South. A handful of buildings now post rates greater than $65.00 per square foot.

Downtown class A rents inched higher in November to $42.31 per square foot from $41.65 per square foot. Class B rents rose 10 cents from October finishing at $36.22 per square foot as the result of a higher-end block of space coming back on the market. The same situation is likely to occur in late 2012, when large blocks of high-quality space are expected to return to the market at the World Financial Center resulting in both an increase in vacancy and asking rent.