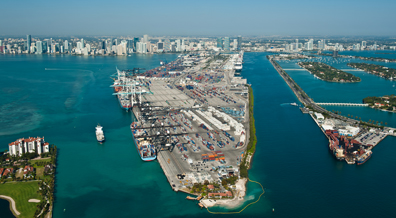 "Even with a myriad of global economic challenges, seaport industrial real estate has continued to retain its premium value over inland industrial locations," said John Carver, head of Jones Lang LaSalle's Ports Airports and Global Infrastructure team. "Rising leasing volumes and demand for warehouse space at these gateway logistics hubs is driving this continued 'coast inward' recovery. In the last year, millions of square feet of space have been taken in and around our busiest ports, bringing vacancy rates down."

Last year's PAGI report unveiled Jones Lang LaSalle's first annual propriety Port Index which rates the top 12 U.S. port markets on their cargo performance, investment plans and TEU (twenty-foot equivalent unit) volumes, and on their real estate fundamentals*.  This year, the port with the highest score is the Port of Los Angeles at 95.1, maintaining its reign from last year but improving its annual score by 3.7 points.  Also at the top of the list again was Long Beach with a close 92.8 rating.

LA continues to top the charts owing to its high container volumes, market share of trans-pacific cargo traffic, its stable real estate market and the $1billion earmarked to capital improvements in the next five years. Other ports that registered score improvements were Houston, Baltimore, Virginia, Charleston, Miami and Jacksonville.

Port of Miami Director Bill Johnson commented, "The Port of Miami is investing well over $2 billion in infrastructure improvements to take advantage of expected shifts in global trade related to the expansion of the Panama Canal in 2014.  We expect our growth to continue at the Port of Miami as we bring improvements such as the -50 ft. Deep Dredge, tunnel linking us to the interstate highway system, and the rehabilitation of rail at the port - which will transform South Florida into a global logistic hub."

"The largest gains were seen in Baltimore, which jumped 8.7 points to reach 82.5, followed by Charleston at 80.8 rising by 7.8 points and Houston, which scored 89.5 up from 84.8 last year," stated Carver.  "Baltimore has seen an increase in cargo volumes and a decrease in vacancy rates. Houston's vacancy rates dropped from 11.3 percent last year to 9.1 percent this year. Charleston made headway owing to strong absorption figures and the lack of over-development keeping vacancy rates in check."

The ports of LA and Long Beach lead the West Coast; Houston tops the Gulf ports while the Port of New York/New Jersey is firmly in pole position for the East Coast earning a respectable 88.9 on the Index.  Vacancy rates across the country vary with Savannah ranking the highest at 23.6 percent owing to an overbuilt market, while LA and Long Beach reside at the lowest level at 6.2 percent followed by Seattle/Tacoma at 7.2 percent.

Ports in the Index are scored on their TEU volumes, cargo growth rates and other factors such as land value-to-lease rate ratio, local vacancy rates, labor costs, availability of on- or near-dock service by Class I railroads as well as planned infrastructure investment.

"While natural disasters, geo-political unrest and general uncertainty have plagued the economic recovery, global cargo volumes have increased substantially," said Carver. "In fact, $316 billion worth of U.S. international imports and exports were recorded in May, just under the all-time high recorded in July 2008, while U.S. exports rose 16.7 percent to $1,837 billion last year, the second highest level reported."

The report, which analyses the real estate landscape around U.S. ports and airports, says that while global trade has accelerated, U.S. ports have been in investment mode.  Capital investment projects including the increase in public private partnerships (P3s) are emerging across the country as ports battle for market share.  In tandem, seaport stakeholders are investing in transport projects.  Miami, for example, is investing over half a billion dollars through a P3 on a tunnel that will divert traffic from downtown, while Savannah will extend a highway near the gates of its container terminal.  Rail freight operators are also investing in intermodal facilities and double-stack capabilities to improve efficiencies and speed of goods-to-market.

"U.S. ports are mindful of the impending completion of Panama Canal expansion project and they have long been preparing to compete for the large 'post-panamax' ships," stated Carver.  "But it will be the ports with an efficient and holistic approach to moving goods as quickly and as cost effectively as possible that will triumph."

The future for U.S. seaport real estate is positive and the sector will continue to outperform the general industrial real estate market.  The markets expected to excel are those with a strong trade and manufacturing base as well as proficient intermodal capabilities. With international trade at an all- time high and other factors including slow steaming (slower sailing to preserve fuel costs), the Panama Canal expansion bringing larger ships to U.S. shores, and free-trade agreements all serve to increase trade and increase the demand for port-side warehouse space.