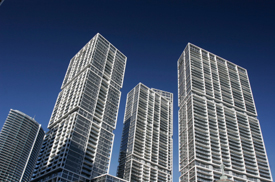 (MIAMI, FL) -- Condo Vultures reports today that prices at the ICON Brickell three-tower condominium project in Greater Downtown Miami have been slashed to as little as $261 per square foot, a 51 percent discount on the average closed sales price in the complex to date.

Prices vary in each of the three towers (Tower One, Tower Two, and Tower Three) based on the floor and the view in the 1,793-unit complex comprised of a pair of 57-story skyscrapers and a 50-story tower with 10 floors of condo-hotel units, according to the Condo Vultures.

"ICON Brickell is a one-of-a-kind project with above-average amenities that several buyers really like," said Peter Zalewski, a principal with Condo Vultures, a Bal Harbour, Florida-based real estate consulting firm. "To date, the pricing, not the product, has been the biggest hurdle for buyers to overcome in completing a deal. The new pricing could go a long way toward bridging the gap between the bids and asks."

Zalewski further commented, "Watch for the closed sales to spike at the ICON Brickell in the first half of this year."

This latest round of price cuts comes three months after the October 2009 announcement that original preconstruction contract buyers in Tower One (North) were being offered 30 percent discounts to close.

A couple of months later in December 2009, the ICON Brickell's developer, Jorge Perez, Chairman of the Related Group, surprised market pundits by beginning closings in the Tower Two (South) despite have more than 600 units still not closed in the Tower One (North)..

ICON Brickell appears to be adopting the same individual retail sales approach that proved successful in 2009 at a host of other new struggling condo projects in Greater Downtown Miami, including the Brickell on the River South Tower, the 1060 Brickell, and Ivy.

By reducing prices, developers were able to close on more than 2,350 units in Greater Downtown Miami - the epicenter of South Florida's housing crash - in 2009.

The 2009 buying activity combined with the recent cancellation of the proposed 32-story Loft III project in Downtown Miami by the Related Group leaves less than 7,300 new condo units, or 34 percent of the product, still in the hands of developers and lenders.

The ICON Brickell project represents about 23 percent of the total remaining developer inventory.

At the end of 2008, developers controlled 43 percent of the new condo inventory in Greater Downtown Miami submarket, reports Condo Vultures.