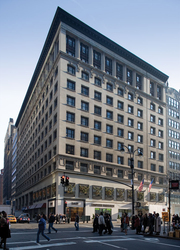 According to Cushman & Wakefield (C & W), foreign buyers now account for 15% of all Manhattan investment sales in 2010.

To further demonstrate that point, C & W also announced today the completion of the sale of the 417 Fifth Avenue office building for $140 million.

The 11-story, 412,000-square-foot building is located at the southeast corner of East 38th Street in the Grand Central submarket.  The building has approximately 380,000 square feet of above-grade space including 23,500 square feet of Fifth Avenue retail.

The buyer was represented by Soly Halabi of Venture Capital Properties.