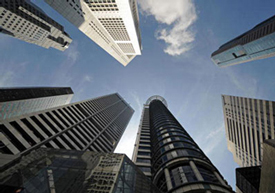 (WASHINGTON, DC) -- With the exception of cash transactions, investment activity in commercial real estate sectors is nearly at a standstill because commercial lending has essentially halted, while job losses are curtailing the demand for space, according to the latest COMMERCIAL REAL ESTATE OUTLOOK of the National Association of Realtors®.

Lawrence Yun, NAR chief economist, said there are serious structural problems in commercial lending.  "Although access to residential mortgages has improved, the opposite is true for commercial loans," he said.  "We need liquidity for commercial mortgage-backed securities not only to free the market, but also to rollover existing debt.  At the same time, the loss of jobs has had a significant impact on the demand for commercial space."

Yun added that default rates on commercial real estate loans are very low by historical standards.  "However, commercial defaults could deteriorate significantly without a properly structured stimulus that addresses liquidity for commercial mortgages," he said.

Realtors® Commercial Alliance Committee chair Steven Good, president and CEO of Sheldon Good & Co. in Chicago, said market conditions are very challenging.  "Given that supply and demand for commercial space varies greatly depending on location, it's important for businesses who want to sell or lease space to consult with a Realtor® familiar with local conditions," he said.

Office rent is likely to contract next year as erosion in the job market curtails demand for space.  Vacancy rates are projected to increase to 16.4 percent in the third quarter of 2009 from 13.4 percent in the third quarter of this year.  Office markets with the lowest vacancies currently include New York, Honolulu and Seattle, all with vacancy rates of 9.6 percent or less.  The highest vacancies are in Detroit, Phoenix and Dallas, with vacancies exceeding 20 percent.

Annual rent in the office sector is expected to slip 0.4 percent this year and decline another 3.6 percent in 2009.  In 57 markets tracked, net absorption of office space, which includes the leasing of new space coming on the market as well as space in existing properties, is seen at 12.3 million square feet this year before contracting by 63.0 million in 2009.

The industrial sector has been holding up fairly well based on the strength of exports, but the
global economic slowdown will take a toll.

Vacancy rates in the industrial sector are forecast to rise to 12.1 percent in the third quarter of 2009 from 10.7 percent in the third quarter of this year.  Industrial markets with the tightest vacancies include Los Angeles, Salt Lake City and Tucson, Ariz., with vacancy rates of 6.8 percent or less.  Areas with the highest vacancies include Detroit; Stamford, Conn.; and Phoenix, with vacancies of at least 15.7 percent.

Annual rent is estimated to ease down 0.8 percent this year and decline another 4.0 percent in 2009.  Net absorption of industrial space in 58 markets tracked should total a negative 57.2 million square feet this year and a negative 134.9 million in 2009.  Many obsolete structures remain on the market because much of the new construction has been built to suit specific needs.

Declines in consumer spending are impacting the retail sector.  The retail vacancy rate will probably be 12.7 percent in the third quarter of 2009, up from 9.8 percent in the third quarter of this year.  Retail markets with the tightest vacancies include San Francisco; Orange County, Calif.; and Honolulu, with vacancy rates of 4.5 percent or less.  Markets with the highest vacancies include Detroit; Columbus, Ohio; and Fort Worth, Texas, with vacancies of 15.6 percent or higher.

Average retail rent is expected to contract 2.0 percent in 2008 and fall another 7.3 percent in 2009.  Net absorption of retail space in 53 tracked markets will likely shrink by 7.3 million square feet this year and contract by another 35.7 million in 2009.

Multifamily vacancy rates are forecast at 5.8 percent in the third quarter of 2009, unchanged from the third quarter of this year.  Markets with the tightest vacancies include San Diego, Northern New Jersey and Boston, with vacancy rates of 4.2 percent or less.  Areas with the highest vacancies include Jacksonville, Fla.; Phoenix; and Orlando, Fla., with vacancies of 8.5 percent or higher.

The COMMERCIAL REAL ESTATE OUTLOOK is published by the NAR Research Division for the Realtors® Commercial Alliance.  The RCA, formed by NAR in 1999, serves the needs of the commercial market and the commercial constituency within NAR, including commercial members; commercial committees, subcommittees and forums; commercial real estate boards and structures; and NAR affiliate organizations.

More than 82,000 NAR members offer commercial services, and 60,000 of those are currently members of the RCA.

The National Association of Realtors®, "The Voice for Real Estate," is America's largest trade association, representing 1.2 million members involved in all aspects of the residential and commercial real estate industries.


For more real estate industry news and trends from the National Association of REALTORS, visit www.Realtor.org.