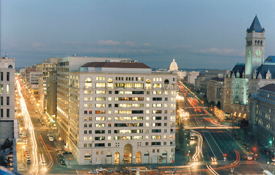 "Given the distressed nature of the marketplace, there are a number of fund players and public players selling assets to deleverage their portfolios," explained Chief Operating Officer Jason Goldblatt.

"This situation provides the opportunity to acquire undercapitalized assets in need of repositioning or reinvestment. By modestly leveraging the $100 million fund, we expect to acquire properties totaling approximately $375 million in value over the next three years."

Because the Willco Fund's investors are local high net-worth individuals rather than institutional investors, the fund will have the flexibility to hold assets for any length of time. Goldblatt continued.

Willco Companies has maintained a low profile while quietly becoming one of the largest commercial property owners, developers, and managers in the Washington, D.C. metropolitan area. Its "trash to treasure" story started in 1937 when William Cohen founded Capitol Trash Company, which grew into the area's largest trash removal business and was later acquired by Waste Management Company.

Willco's investment in real estate commenced in the early 1960's, with the development of the Vanguard Building at 20th and L Streets, N.W., currently headquarters of the Peace Corps.

Among its many suburban Maryland holdings are the Washington Science Center in North Bethesda, comprising approximately 750,000 SF and leased to substantially to The National Institutes of Health, and the 130,000 SF Shady Grove Adventist Medical Center in Germantown, MD, which contains the State's first free-standing emergency facility.

The Company also has numerous development projects in its pipeline, including a 700,000 square foot mixed-use project in the city's Capitol Riverfront district adjacent to the Washington Nationals Ballpark; a 190,000 SF office project in downtown Silver Spring, Maryland; and a 310,000 SF mixed-use project at 6000 Montrose Parkway in North Bethesda, Maryland.