(LOS ANGELES, CA) - Priced at $7,995,000, singer Christina Aguilera's Hollywood Hills home can't be purchased for a song, but it is still on the market, and that's more than can be said of some other houses listed six months ago during the beginning of turbulent times in residential real estate. Many have been taken off of the market.

A lot has happened in the housing market and on Aguilera's home front during the past six months and just before that. The Grammy-winning songwriter and her husband, music marketer Jordan Bratman, also expanded their family and purchased the former Beverly Hills home of rocker Ozzy Osbourne and his wife, Sharon, for $11.5 million.

That house has six bedrooms and 10 bathrooms in 11,500 square feet, and it is considered more family friendly than the modern-style Hollywood Hills home, which has five bedrooms and seven bathrooms in 6,500 square feet. The Hollywood Hills home also has a gym, pool, 12-person spa with a fireplace; a professional screening room seating 18, and a 1,200-square-foot master suite.

Aguilera, 27, made her TV debut on "Star Search" before she was 10 years old. She has sold more than 30 million in albums worldwide.

Drew Fenton of Hilton & Hyland, Beverly Hills, has the listing.


Christopher Lloyd, who played the eccentric Emmett "Doc" Brown in the "Back to the Future" movies and appeared as Taber in "One Flew Over the Cuckoo's Nest" (1975), has put his pied-a terre in Montecito, near Los Angeles, on the market at $3.6 million.

At the same time, Lloyd took his primary residence, also in the Montecito area, off the market, where it had been listed originally in the spring of 2007 at $11.3 million. Lloyd now plans to remodel that house

It has one bedroom in 5,500 square feet plus a guest house. The home, on 8.5 acres, was built in 1972 of made-on-site adobe bricks. The living room and bedroom share a patio with a reflecting pool.

The pied-a-terre has two bedrooms and two bathrooms in 2,514 square feet. The main house, which is gated, has bamboo floors and a raised bamboo pergola overlooking a swimming pool and spa. The pool also has a waterfall.

Other features are three fireplaces, a study off the living room and high ceilings.

During his early career, Lloyd, 70, played Rev. Jim on the TV series "Taxi." He has appeared in more than 200 stage plays. Among them were several on Broadway.

When not working as an actor, Lloyd has remodeled and sold other homes in Montecito and Los Angeles. He takes special interest in caring for rare and exotic plants on his grounds.

Talk to anybody on the island, it seems, and you can get a list of famous second-home owners that is almost as long as the titles of movies and TV shows made in this tropical paradise.

We're looking from on high at Kauai and its North Shore, along the Napali Coast, just beyond Kilauea, Princeville, and Hanalei. 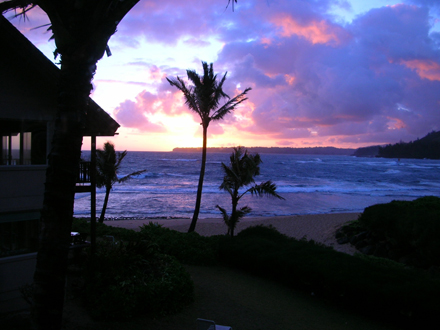 
This is where most of the celebrities live when they come to this island. And the list has grown substantially in 30 years. Sylvester Stallone was one of the first stars to come here when he bought land for a polo field near a parcel for a house he then built on the-two-mile-long Anini Beach. 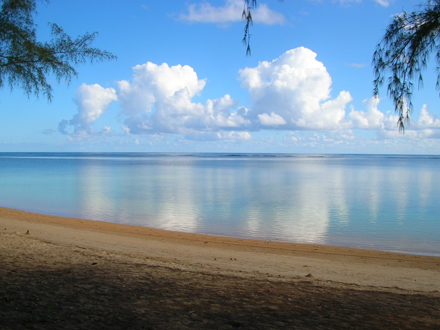 
Then there was Bette Midler, who grew up in Hawaii but lives near Kilauea, locals say. 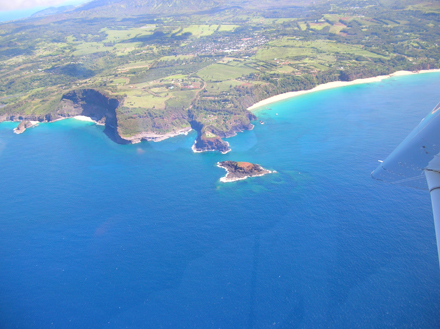 "Just don't ever tell anybody exactly where I live," Brosnan is said to have told Agatha Abernathy, a tour guide for a small bus driven to movie and TV shoot sites by "Uncle Ben."

"Did you know that bamboo grows four feet a day?" asked Abernathy, who seems equally at home discussing celebrities or movie-shoot sites.

Houses purchased by celebrities are priced, on the water, in the $10 million to $26 million range, but, alas, none is officially on the market at this time, a real estate broker said.

Among the movies and TV series shot in Kauai were "Jurassic Park," "Blue Hawaii, " South Pacific," "Gilligan's Island, "Raiders of the Lost Ark," and "Fantasy Island." 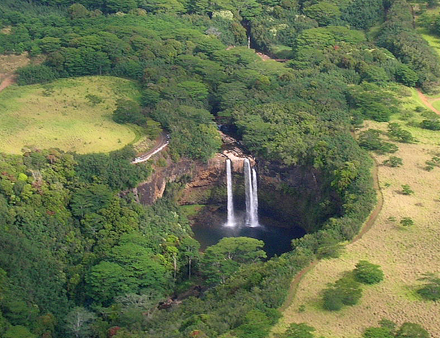