Nationally, Home Price Declines Closed Out 2008 with Record Lows According to the S&P/Case-Shiller Home Prices Indices

(NEW YORK, NY) -- Data through December 2008, released today by Standard & Poor's for its S&P/Case-Shiller Home Price Indices, the leading measure of U.S. home prices, show that the prices of existing single family homes across the United States continue to set record declines, a trend that prevailed throughout all of 2007 and 2008. 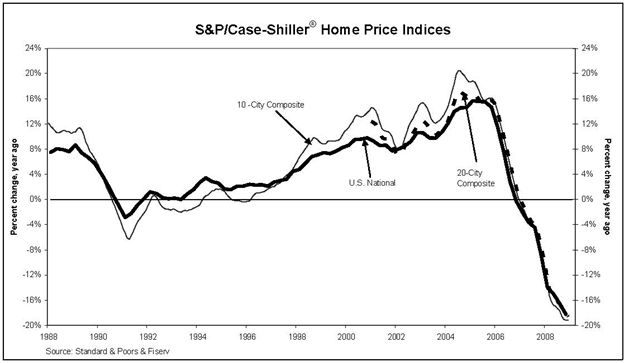 The chart above depicts the annual returns of the U.S. National Home Price, the 10-City Composite and the 20-City Composite Indices. The decline in the S&P/Case-Shiller U.S. National Home Price Index - which covers all nine U.S. census divisions - recorded an 18.2% decline in the 4th quarter of 2008 versus the 4th quarter of 2007, the largest in the series' 21-year history. The 10-City and 20-City Composites also set new records, with annual declines of 19.2% and 18.5%, respectively.

"The broad downturn in the residential real estate market continues," says David M. Blitzer, Chairman of the Index committee at Standard & Poor's. "There are very few, if any, pockets of turnaround that one can see in the data. Most of the nation appears to remain on a downward path, with all of the 20 metro areas reporting annual declines, and eight of those MSA's now with negative rates exceeding 20%.  If one looks in detail at the annual return data, it can be seen that 13 of the 20 MSA's and the two composites have been reporting consecutive record declines since December 2007. The monthly data follows a similar trend, with all of the metro areas reporting at least four consecutive months of negative returns." 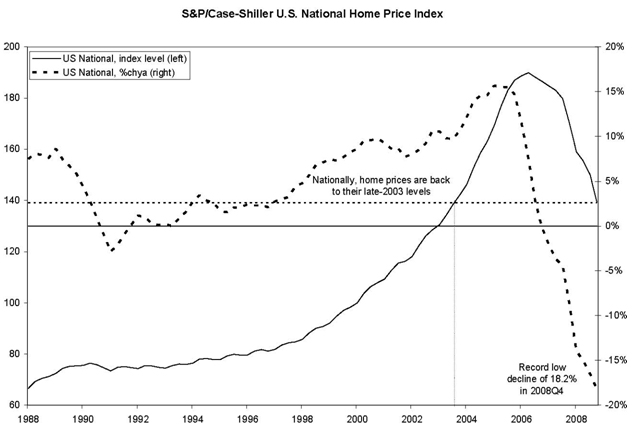 All 20 metro areas are reporting negative monthly and annual rates of change in average home prices. Boston, Denver, Los Angeles, San Diego and Washington D.C. are reporting a relative improvement in year-over-year returns, in terms of lesser rates of decline than last month's values. Detroit showed a marginal improvement in monthly returns, but was worse off in its annual rate. Minneapolis, Las Vegas and Phoenix all reported monthly declines in excess of 4.5% in December.

The seven worst performing cities in terms of year-over-year declines continue to be from the Sunbelt, reporting negative returns in excess of 20%. Phoenix was down 34.0%, Las Vegas reported -33.0% and San Francisco fell 31.2%. Denver, Dallas, Cleveland and Boston faired the best in terms of annual declines down 4.0%, 4.3%, 6.1% and 7.0%, respectively.

Looking at the data from peak-thru-December 2008, Dallas is down a relatively mild 8.6% from its peak in June 2007, while Phoenix is down 45.5% from its peak in June of 2006. The rates of decline from the individual heights of each market are evidence of how much each market has taken back in terms of the gains earned in the past 10-15 years. Eighteen of the 20 metro areas are in double digit declines from their peaks, with half of the MSA's posting declines of greater than 20% and four of those (Las Vegas, Miami, Phoenix and San Francisco) in excess of 40%.

The table on the next page summarizes the results for December 2008. The S&P/Case-Shiller Home Price Indices are revised for the 24 prior months, based on the receipt of additional source data. 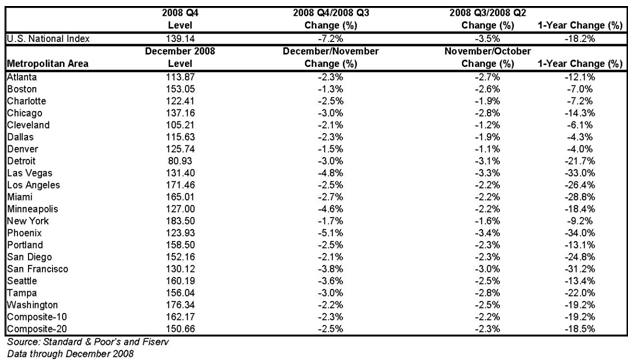 These indices are generated and published under agreements between Standard & Poor's and Fiserv, Inc.