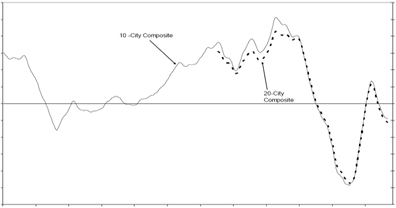 
On an annual basis, Washington DC was the only MSA with a positive rate of change, up 1.3%. The remaining 19 MSAs and the 10- and 20- City Composites were down in May 2011 versus the same month last year. Minneapolis fared the worst posting a double-digit decline of 11.7%. 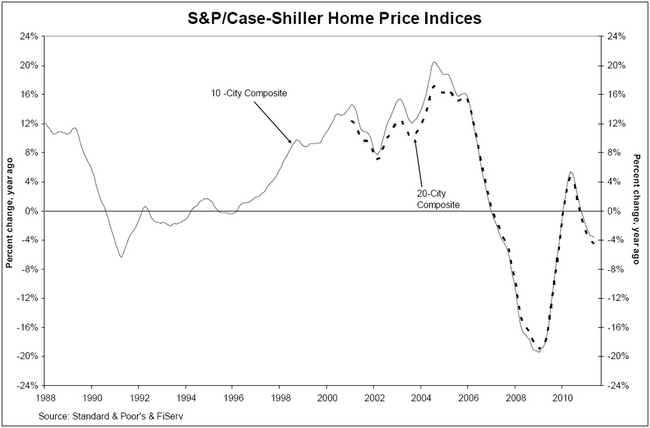 The chart above depicts the annual returns of the 10-City and the 20-City Composite Home Price Indices. In May 2011, the 10- and 20-City Composites recorded annual returns of -3.6% and -4.5%, respectively. Both Composites and 11 MSAs - Atlanta, Dallas, Detroit, Las Vegas, Los Angeles, Minneapolis, New York, Phoenix, San Diego, Seattle and Tampa - saw their annual rates worsen in May compared to April.

"We see some seasonal improvements with May's data," says David M. Blitzer, Chairman of the Index Committee at S&P Indices. "This is a seasonal period of stronger demand for houses, so monthly price increases are to be expected and were seen in 16 of the 20 cities. The exceptions where prices fell were Detroit, Las Vegas and Tampa. However, 19 of 20 cities saw prices drop over the last 12 months. The concern is that much of the monthly gains are only seasonal.

"May's report showed unusually large revisions across some of the MSAs. In particular, Detroit, New York, Tampa and Washington DC all saw above normal revisions. Our sales pairs data indicate that these markets reported a lot more sales from prior months, which caused the revisions. The lag in reporting home sales in these markets has increased over the past few months. Also, when sales volumes are relatively low, as is the case right now, revisions are more noticeable.

"Other recent housing statistics show that single-family housing starts were up moderately in June, and are at about the same pace as a year ago. Existing-home sales were flat in June, reportedly because of contract cancellations and tight credit. The S&P/Experian Consumer Credit Default indices showed a continuing decline in mortgage default rates since last winter. Other reports confirm that banks have tightened lending standards in the past year, making it harder to qualify for a mortgage despite very low interest rates. Combined, these data all support a continuation of the 'bounce-along-the-bottom' scenario we have witnessed in the housing market over the past two years. "While the monthly data were encouraging, most MSAs and both Composites fared poorly in annual terms.

Nineteen of the 20 MSAs and the two Composites posted negative annual growth rates in May 2011. The 10-City Composite was down 3.6% and the 20-City Composite was down 4.5% in May 2011 versus May 2010. Minneapolis posted a double-digit decline in annual rate of 11.7%. The only beacon of hope was Washington D.C. with a +1.3% annual growth rate and a +2.4% monthly increase. We have now seen two consecutive months of generally improving prices; however, we might have a long way to go before we see a real recovery. Sustained increases in home prices over several months and better annual results need to be seen before we can confirm real estate market recovery." 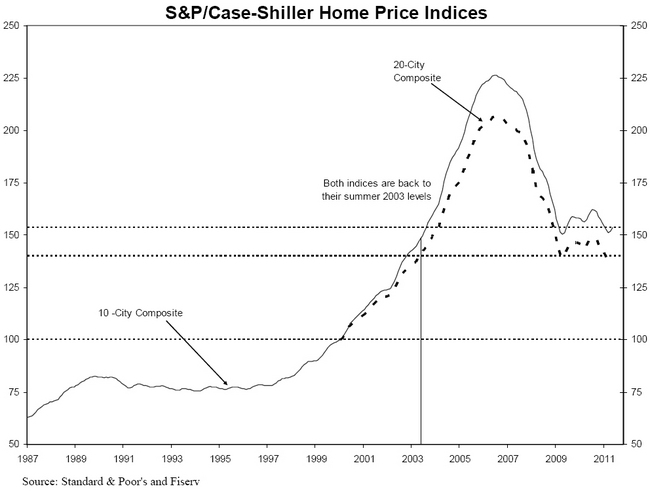 As of May 2011, 16 of the 20 MSAs and both Composites posted positive monthly changes. Phoenix was flat. Detroit, Las Vegas and Tampa were the markets where levels fell in May versus April, with Detroit down by 2.8% and Las Vegas posting its eighth consecutive monthly decline. These three cities also posted new index level lows in May 2011. They are now 51.2%, 59.3% and 47.5% below their 2005-2006 peak levels, respectively.

The table below summarizes the results for May 2011. The S&P/Case-Shiller Home Price Indices are revised for the 24 prior months. 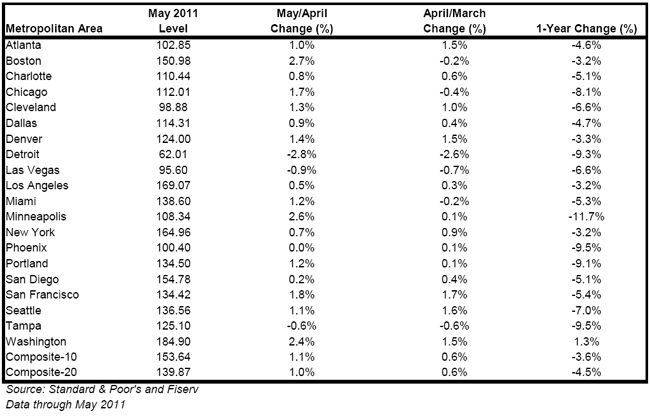