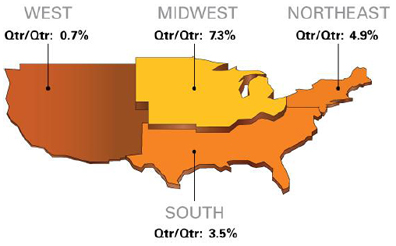 Based on Clear Capital latest monthly Home Data Index (HDI) Market Report, U.S. home prices rose 4.0 percent when compared to the most recent rolling quarter to the previous one.

Though quarter-over-quarter gains continue across the nation's four regions, the rate of growth has begun to slow as the summer buying season comes to an end and economic confidence shows signs of weakening.

"Although the summer gains appear to signal strong growth in home prices, it's important to keep in mind that these gains are off of the record lows of winter," said Dr. Alex Villacorta, director of research and analytics at Clear Capital. "With summer coming to a close and the price gains clearly starting to level off, the market is at a critical juncture as to whether it can avoid another significant downturn into the slower buying seasons of fall and winter.


Villacorta further commented, "The latest readings on consumer confidence paint an ominous picture that at present, consumers are still not ready to risk jumping into the market despite very low mortgage rates and very affordable home prices." 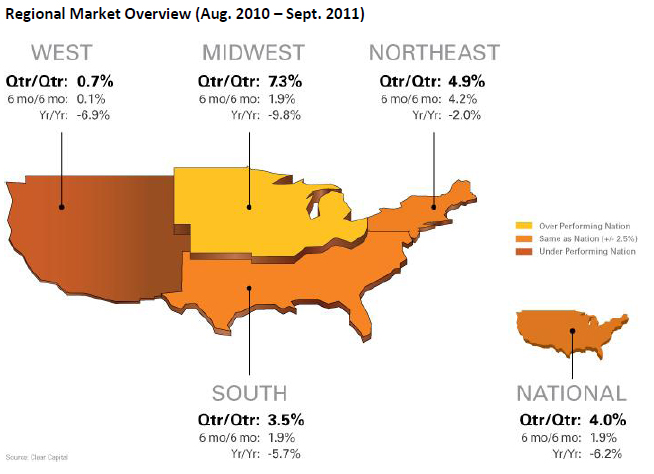 
Quarter-over-quarter price gains continue across the nation's four regions, however, the rate of growth has begun to slow. This softening appears to be the result of pressure from a volatile stock market, high unemployment rates, elevated home sales inventory and slow home sales rates. These factors are signaling a potentially challenging fall and winter housing market.

The Midwest was the only region to increase quarterly price gains―up 1.0 percentage points over last month's report to 7.3 percent, and was buoyed by solid improvement in Chicago and the Ohio markets in particular. However, the Midwest's noted vulnerability to significant seasonal price swings is likely to limit the duration of this trend. The Northeast and South regions saw quarterly gains soften to 4.9 percent and 3.5 percent respectively, which represents a slowdown of 0.3 and 0.7 percentage points from last month's report. Quarterly price gains in the West region were insignificant, even during the summer buying season, and mirrored last month's gains of 0.7 percent. With economic uncertainty and significant distressed sales activity affecting the West, this small gain may potentially represent peak price growth in the region for the rest of 2011.

With home price data through August, it has become clear the seasonal uplift in prices has most likely reached its peak, and has made up some of the severe losses from last winter. It is important to note however, this growth was moderated by the public's perception of the poor health of the economy, driven by several economic and political events during the season including the jobs outlook and political maneuvering over the U.S. debt ceiling.

One key indicator of public perception is the Gallup Economic Confidence Index (ECI)--a survey of consumer opinions on current economic conditions, and if they perceive those conditions to be getting better or worse. The ECI as a measure of public perception of the overall economic health can provide key insight into whether consumers are likely to return to the housing market. ECI scores are positive or negative depending on the level of consumer confidence in a particular state or market--a positive score means higher confidence; a negative score equates to lower confidence.

Through the first half of 2011, both consumers and the housing market have had little to feel confident about, and the statistically significant correlation between the ECI and the yearly change in home prices reflects this lack of enthusiasm about the current economic environment.

Those areas with higher "economic confidence" as measured by the ECI through June 2011, also tended to see an improvement in yearly real estate prices. For example, Washington, D.C. had an ECI value of 11 for the first half of 2011 (higher than all 50 states) and has a current year-over-year home price growth for the District of 5.8 percent, also one of the highest growth rates across the nation. Conversely Nevada, one of the hardest hit states in the country in terms of home price declines, had an ECI of -35, seventh worst of all states, and a current year-over-year price decline of -11.7 percent according to our HDI index, one of the largest drops across the nation.

For the first half of 2011, the nation's economic confidence as a whole was largely negative, averaging an ECI score of -28. With this pessimism, potential buyers tend to sit on the sidelines, despite record affordability levels in many markets, and are unwilling to make large purchases with long term commitments. Along with this hesitancy, there is a growing sentiment to stay agile to better pursue potential job opportunities, causing some consumers to postpone home purchases. This is shown in a decline of national homeownership rates over the past five years of 2.8 percent, while the rental sector has sustained its demand with a decline in rental vacancy rates of -0.4 over the same period.

Consumer confidence can be seasonally lifted, but the effects tend to fade over time in stagnant economic environments, such as our current condition. With the combination of slowing home price gains, combined with the current ECI reading of -49 nationally (through Sept. 4, 2011), it appears the recent summer price increases are extremely vulnerable, and the signs are that the coming months will be very challenging for home prices. If these indicators aren't enough, the recent announcement by the Bureau of Labor Statistics last week that reported the unemployment rate held steady at a high 9.1 percent, further supports Clear Capital's six month forecast published at the beginning of July, which projected 2.6 percent home price decline nationally by the end of 2011. 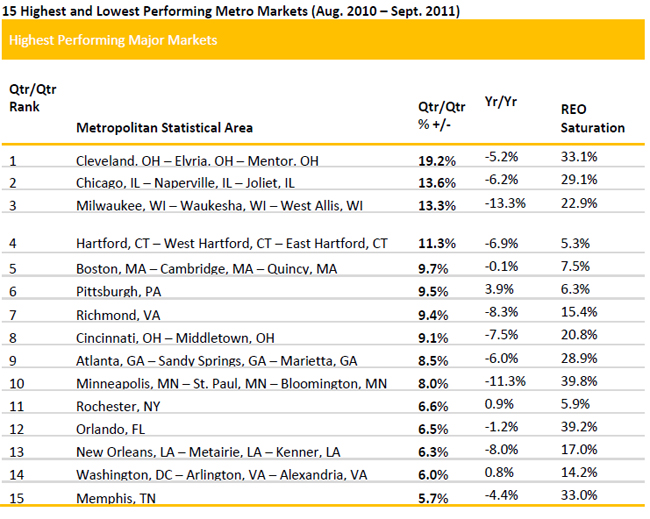 
Cleveland supplants Milwaukee as the market with the largest quarter-over-quarter gains this month. Cleveland's large gains reflect vast differences in this housing market's REO composition between the winter, and the spring/summer home buying seasons. This difference is enhanced in Cleveland because of the high concentration of REO sales among lower-priced homes during the late winter and early spring (the previous rolling quarter). This seasonal variation is influencing today's quarterly price gains in Cleveland, and is not a true picture of overall home price recovery. Further, Cleveland's yearly price decline of 5.2 percent and high REO saturation calls out its susceptibility to ongoing volatility, and questions the viability of a prolonged recovery.

All of our best performing MSAs, with the exception of Rochester, experienced declines in REO saturation rates from last month's report. Contrary to these positive results, nine of these markets maintained prices more than five percent below levels of a year ago, and six markets maintain REO saturation rates above the national rate of 26.3 percent. With quarterly price gains likely to subside into the fall and winter, even our highest performing markets remain susceptible to volatility in the months to come. 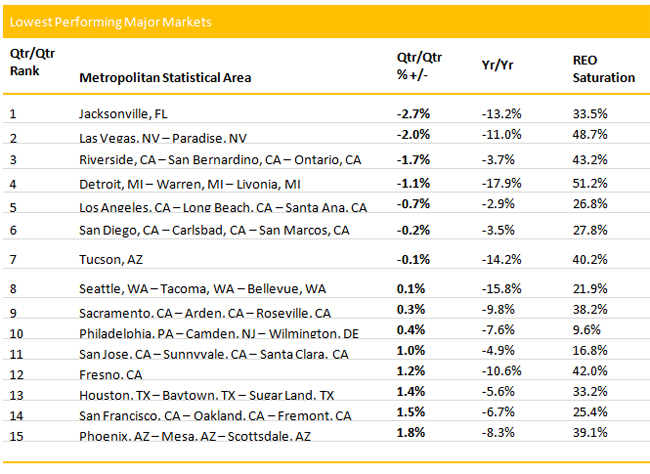 
The West region largely missed out on seasonal gains experienced by the other regions, and as a result, the majority of the lowest performing major markets reside in the West, from the MSAs in Washington state, down the coast into California and Nevada, and then to the south to MSAs in Arizona. Negative quarterly numbers expanded their presence this month with seven of the 15 markets seeing price declines and all of the lowest performing markets showing yearly declines. REO saturation has been on the decline, but 11 of the bottom 15 markets remain well above the national rate.