Las Vegas Home Prices, Sales Both on the Rise 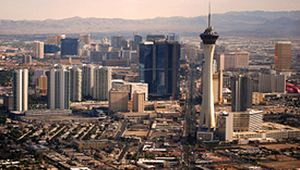 According to GLVAR, the total number of local homes, condominiums and townhomes sold in November was 3,883, or two more sales than the 3,881 properties sold in October. November sales were also up from 3,510 total sales one year ago.

Within that total, single-family home sales during November increased by 13.8 percent, while sales of condos and townhomes decreased by 1.2 percent, all when compared to November of 2010.

"I think there's just less inventory, especially in areas where homes are really selling," Bell said. "It's much lower today than say four years ago, when we had almost 25,000 homes on the market."

He explained that the number of local properties listed for sale continues to decrease, especially in popular neighborhoods in master-planned communities and near large employment centers.

The increase in local home sales between October and November also bucks seasonal trends from the past decade, when local home sales generally declined through the holiday and winter months that make up the slowest season for local home sales. Bell said this year's ongoing sales surge continues to be driven by investors buying homes at bargain prices.

"Investors are definitely making a difference right now by restoring homes and helping to drive up prices," he said.

In November, GLVAR reported that 48.2 percent of all existing homes sold in Southern Nevada were purchased with cash. That's down from 50.0 percent in October.

Meanwhile, 26.8 percent of all existing local homes sold during November were short sales, which occur when a bank agrees to sell a home for less than what the borrower owes on the mortgage. That's up from 25.4 percent in October, but still down from a peak of 34 percent set in June 2010.

Bank-owned homes accounted for 46.0 percent of all existing home sales in November, down from 48.1 percent in October.

This month's GLVAR statistics include activity through the end of November 2011. GLVAR distributes such statistics each month based on data collected through its MLS, which does not necessarily account for newly constructed homes sold by local builders or for sale by owners. Other highlights reported by GLVAR include: