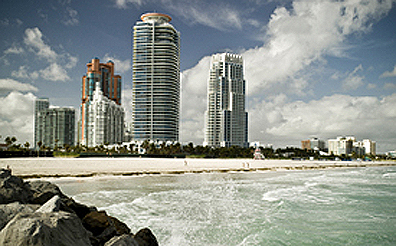 According to Condo Vultures, the average resale asking price for a condo or townhouse near the coast in South Florida is nearly four times more than the typical listing price of a unit in the suburbs of the tricounty region.

Condo resellers in South Florida are seeking an average of $523,800 for a unit near the coast - east of Interstate 95 - compared to a price of $118,200 for a unit in suburban Miami-Dade, Broward, and Palm Beach counties, says Condo Vultures.

The South Florida condo resale environment is increasingly becoming a tale of two markets," said Peter Zalewski, a principal with the Bal Harbour, Fla.-based Condo Vultures LLC. "The average asking price for a condo resale near the coast is nearly $406,000 more expensive than the cost of a unit in suburbia. South Florida's double-digit unemployment rate - which is higher than the national average - is at the root of the price differential.

"Contributing to the price discrepancy is the fact that condo owners in suburbia are struggling to hold on to their homes while the coastal market has received an infusion of all-cash investors and second-home buyers who are somewhat less vulnerable to the economic downturn."

South Florida is a tricounty region with a population of nearly 5.5 million people living from south to north in Miami-Dade, Broward, and Palm Beach counties. Interstate 95 bisects each county with the coast to the east and the suburbs to the west.

Developers created 185,000 condominium units during the real estate boom beginning in 2003. Some 100,000 units were created in suburban rental projects that were converted into condominiums and sold to primary users and local investors.

Of the 85,000 units constructed during the boom, some 49,000 units were built in the seven largest coastal markets of Greater Downtown Miami, South Beach, Sunny Isles Beach, Hollywood / Hallandale Beach, Downtown Fort Lauderdale and the Beach, Boca Raton / Deerfield Beach, and Downtown West Palm Beach and Palm Beach Island, according to the Condo Vultures.

At the end of 2010, some 7,400 new condos in the seven largest coastal markets had still not sold as developers and lenders refused to cut prices to the levels that investors want to pay. This trend is working to refocus some investors away from new construction and into the resale market.

Nearly $11 billion in condo and townhouse resales are available for purchase at an average price of $335,500 each in the tricounty South Florida region as a super majority of the total asking amount is concentrated in units near the coast, according to the analysis based on Florida Realtors association data.

Condo and townhouse resales in South Florida's coastal markets represent nearly 84 percent of the total amount for resale while units in suburbia represent only 16 percent of the available inventory based on asking prices, according to the report.

The concentration of condo resale inventory near the coast is being bolstered by a disproportionate number of units available for purchase in Miami-Dade County compared to Broward and Palm Beach counties.

Nearly 68 percent of the 12,600 units on the resale market in Miami-Dade County are located east of Interstate 95 compared to 4,100 units in suburbia.

In Broward County only 44 percent of the 9,700 condo resales available are near the coast compared to 5,500 units located west of Interstate 95.

In Palm Beach County, nearly 46 percent of the 10,300 available condo resales are located east of Interstate 95 compared to 5,600 units situated in suburbia, according to the report.

Given the influx of foreign buyers with strong currencies, it is no surprise that coastal condos for resale in Miami-Dade County also have an average asking price that is higher than the regional listing amount.