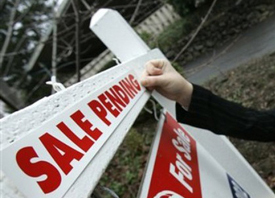 According to the National Association of Realtors (NAR), pending home sales rose again in November, with the broad trend over the past five months indicating a gradual recovery into 2011.

The Pending Home Sales Index, a forward-looking indicator, rose 3.5 percent to 92.2 based on contracts signed in November from a downwardly revised 89.1 in October.  The index is 5.0 percent below a reading of 97.0 in November 2009.  The data reflects contracts and not closings, which normally occur with a lag time of one or two months.

"If we add 2 million jobs as expected in 2011, and mortgage rates rise only moderately, we should see existing-home sales rise to a higher, sustainable volume," Yun said.  "Credit remains tight, but if lenders return to more normal, safe underwriting standards for creditworthy buyers, there would be a bigger boost to the housing market and spillover benefits for the broader economy."

The 30-year fixed-rate mortgage is forecast to rise gradually to 5.3 percent around the end of 2011; at the same time, unemployment should drop to 9.2 percent.

For perspective, Yun said that the U.S. has added 27 million people over the past 10 years.  "However, the number of jobs is roughly the same as it was in 2000 when existing-home sales totaled 5.2 million, which appears to be a sustainable figure given the current level of employment," he explained.

"All the indicator trends are pointing to a gradual housing recovery," Yun said.  "Home price prospects will vary depending largely upon local job market conditions.  The national median home price, however, is expected to remain stable even with a continuing flow of distressed properties coming onto the market, as long as there is a steady demand of financially healthy home buyers."

"As we gradually work off the excess housing inventory, supply levels will eventually come more in-line with historic averages, and could allow home prices to rise modestly in the range of 2 to 3 percent in 2012," Yun said.