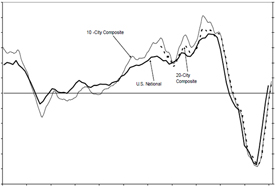 
According to Standard & Poor's latest Case-Shiller Home Price Index, U.S. National Home Price Index fell 3.2% in the first quarter of 2010, but remains above its year-earlier level.

In March, 13 of the 20 MSAs covered by S&P/Case-Shiller Home Price Indices and both  monthly composites were down although the two composites and 10 MSAs showed year-over-year gains. Housing prices rebounded from crisis lows, but recently have seen renewed weakness as tax incentives are ending and foreclosures are climbing. 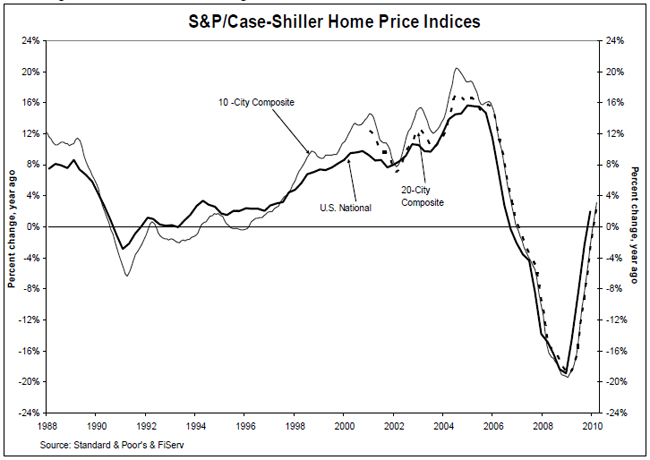 The chart above depicts the annual returns of the U.S. National, the 10-City Composite and the 20-City Composite Home Price Indices. The S&P/Case-Shiller U.S. National Home Price Index, which covers all nine U.S. census divisions, recorded a 2.0% improvement in the first quarter of 2010 over the first quarter of 2009. In March, the 10-City and 20-City Composites recorded annual returns of +3.1% and +2.3%, respectively. These two indices are reported at a monthly frequency and have seen improvements in their annual rates of return every month for the past year.

"The housing market may be in better shape than this time last year; but, when you look at recent trends there are signs of some renewed weakening in home prices," says David M. Blitzer, Chairman of the Index Committee at Standard & Poor's. "In the past several months we have seen some relatively weak reports across many of the markets we cover. Thirteen MSAs and the two Composites saw their prices drop in March over February. Boston was flat. The National Composite fell by 3.2% compared to the previous quarter and the two Composites are down for the sixth consecutive month.

"While year-over-year results for the National Composite, 18 of the 20 MSAs and the two Composites improved, the most recent monthly data are not as encouraging. It is especially disappointing that the improvement we saw in sales and starts in March did not find its way to home prices. Now that the tax incentive ended on April 30th, we don't expect to see a boost in relative demand." 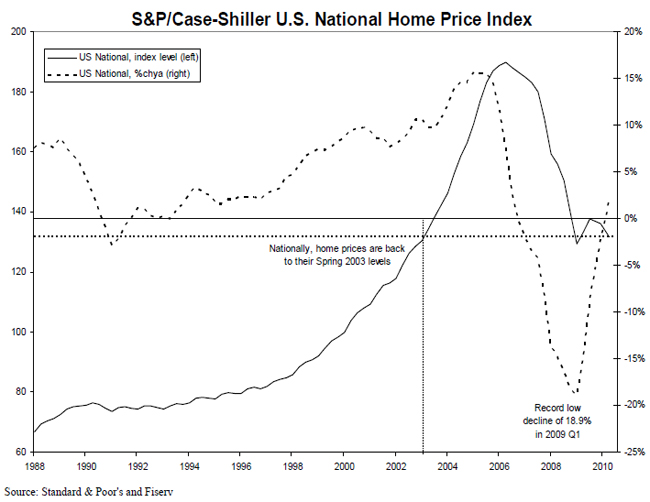 The 10-City and 20-City Composites did continue to show improvement in their annual rates of return. Eighteen of the 20 metro areas and both the Composites saw improvement in their annual returns this month compared to February data. Atlanta and Charlotte were the only exceptions. Las Vegas was the only city to still post a double digit annual rate of decline at the end of March 2010.

Looking at the monthly statistics, 13 of the 20 metro areas showed a decline in March compared to February. Boston was flat. Eight MSAs posted new index lows in March - Atlanta, Charlotte, Chicago, Detroit, Las Vegas, New York, Portland and Tampa. Las Vegas and Phoenix have peak-to-current declines of 56.3 and 51.8%, respectively. On a more optimistic note, Los Angeles, Minneapolis, San Diego and San Francisco have shown recovery from recent lows of +7.2%, +7.4%, +10.9%, and +16.2%, respectively. San Diego, in particular, has stood out with 11 consecutive months of increasing home prices.

The table below summarizes the results for March 2010. The S&P/Case-Shiller Home Price Indices are revised for the 24 prior months, based on the receipt of additional source data. 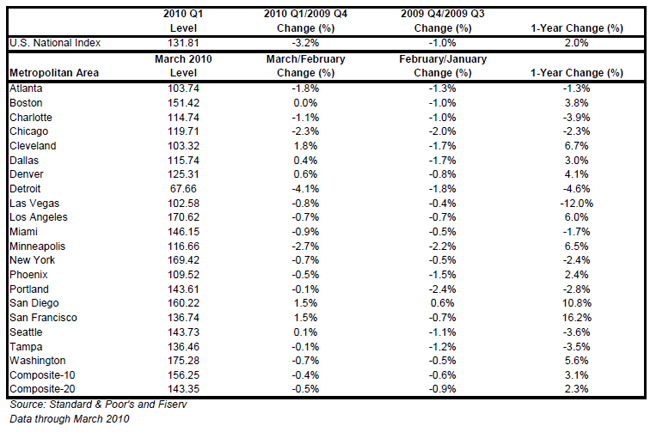