(MCLEAN, VA) -- Freddie Mac (NYSE:FRE) today released the results of its Primary Mortgage Market Survey (PMMS) in which the 30-year fixed-rate mortgage (FRM) averaged 4.83 percent with an average 0.7 point for the week ending November 19, 2009, down from last week when it averaged 4.91 percent. Last year at this time, the 30-year FRM averaged 6.04 percent.

The five-year Treasury-indexed hybrid adjustable-rate mortgage (ARM) averaged 4.25 percent this week, with an average 0.6 point, down from last week when it averaged 4.29 percent. A year ago, the 5-year ARM averaged 5.87 percent.

The one-year Treasury-indexed ARM averaged 4.35 percent this week with an average 0.6 point, down from last week when it averaged 4.46 percent. At this time last year, the 1-year ARM averaged 5.29 percent.

"Interest rate on 30-year fixed-rate mortgage loans fell for the third consecutive week to the lowest since the week ending May 21st, while 15-year fixed rates were the lowest since our records began in 1991," said Frank Nothaft, Freddie Mac vice president and chief economist. "Low fixed rates throughout the third quarter prompted an estimated $1.1 trillion in refinancing activity, saving homeowners about $10 billion in aggregate monthly payments over the first 12 months of their new loan. Moreover, for the fourth consecutive quarter, more than 95 percent of prime borrowers who originally had an ARM selected a conventional fixed-rate mortgage in the third quarter of this year.

"Meanwhile, new home building showed some weakness in recent months. Residential construction eased 10.6 percent (annualized) between September and October, largely driven by a 33.3 percent decline in new condominium and apartment buildings and represented the slowest pace since records began in 1959. And homebuilder confidence in November remained a relatively low level, according to the National Association of Home Builders." 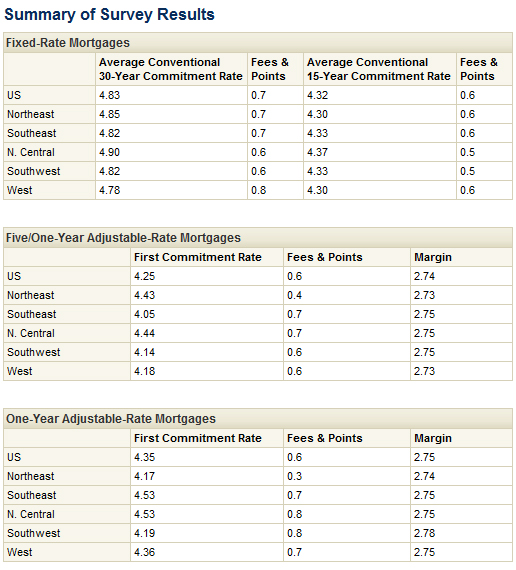