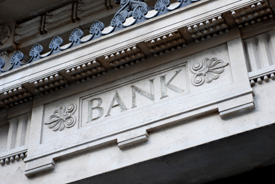 Why Are Banks Withholding Highend Repossessions Over $300,000 From the Market?

With the expiration of the first-time buyer tax credit on April 30, there are now two main props keeping the housing market afloat.  One is the growing percentage of home sales financed by Federal Housing Administration (FHA) loan guarantees.  The other is the refusal of banks to put on the market foreclosed homes over $300,000.

In this article, we will take a look at the second factor.  A future report will examine the role of the FHA in keeping the market from collapsing.

Let's begin with Chicago.  Cook County is comprised of Chicago and its contiguous suburbs and has a population of roughly 5.3 million residents.  It experienced a huge bubble during 2004-2006 and has suffered a substantial drop in both prices and home sales.

RealtyTrac.com has the most comprehensive database on foreclosures.  It claims to have specifics on over 1.5 million defaulted, auction-ready, and bank-owned properties.  The information is updated daily.  You can organize listings of defaulted properties; those scheduled for auction, and repossessed homes (REO) by date as well as by amount.  The website also provides a separate listing of those properties which have been put up for sale by the lender.

As of July 15, RealtyTrac listed 28,829 properties which had been foreclosed and repossessed by lenders.  Some have been owned by the bank as long as 2½ years without having been placed on the market.  Roughly half have been repossessed by the lender since late January 2010.

This year, banks in the Chicago area have foreclosed on a huge number of expensive homes.  RealtyTrac lists 2,650 repossessed homes for more than $300,000 and 169 for more than $1 million.

Here is where it gets really interesting.  Out of 28,829 repossessed properties, there were only 1,292 listed by lenders as "for sale."  The vast majority of these available homes were inexpensive.  A mere 29 homes over $300,000 were for sale.  In other words, the banks have withheld from the market 2,621 properties listed at $300,000 or higher.

There are probably two important reasons why banks have pursued this strategy.  First, they are concerned that placing these more expensive homes on the market will severely weaken an already thin upper tier market.

Even more crucial is that selling substantial numbers of expensive homes at discounts of 50% or more would compel the lenders to take substantial losses which have been avoided by keeping them off the market.

To give you an example, one repossessed home in the upper income suburb of Glencoe was purchased in January 2004 for $850,000.  Though not listed for sale yet, its opening bid price is $2,819,000.  This suggests that the foreclosed owner had refinanced the property to the tune of $2.8 million.  If the holder of the first lien put a home like this on the market, it could be forced to swallow a loss approaching $2 million or perhaps even more.

One big problem with this strategy is that the banks have also ramped up their placing of seriously delinquent borrowers into default - the first step in the foreclosure process.  RealtyTrac listed 39,963 defaulted properties in Cook County as of July 15.  All of them have been placed into default since August 2009 and half of them since early February of this year.  That is nearly 4,000 per month for the past five months and nearly 10,000 in the last two months alone.  Of these defaulted properties, there are 7,550 listed over $300,000.  Sooner or later, these homes are coming on to the market either as foreclosures or short sales.

Sales of all new and existing homes and condos totaled only 9,057 in the first quarter of 2010 according to DataQuick.  That is an average of slightly more than 3,000 per month for a county with over one million owner-occupied units.  Since the peak in early 2006, home sales in the Chicago area have plunged by nearly 75%.  Median sale prices for Cook County slid to only $175,000 in the first quarter, down 10% from a year earlier according to DataQuick.

With so many homes listed for more than $300,000 now languishing on the Cook County market, it is somewhat understandable that the banks would be reluctant to add their foreclosed homes in this price range to a weak market.  When you add in the 7,550 defaulted properties in this price range which have not yet been repossessed by the banks, you can get a sense of the soaring number of homes that is ready to inundate an already glutted market.  When these homes come onto the market, as they eventually must, prices will inevitably plunge.

Current home sellers may have been taken in by all those reports lately which have been claiming that the housing market is "stabilizing."  Only 35% of all the homes listed for more than $300,000 have had their asking price reduced since posting on Trulia.  So these homes just sit ... and sit.

Most readers know that the collapse of the housing market in south Florida has been more severe than anywhere except perhaps Las Vegas.  A recent REAL ESTATE CHANNEL article reported that banks have been repossessing south Florida homes at a rate of 4,000 per month in 2010.  That would seem to suggest that the foreclosure debacle might soon stabilize.  Let's see.

According to RealtyTrac, on July 16 there were 10,858 repossessed properties in Miami-Dade County.  More than 2,100 have been held by the banks for more than a year without having been placed on the market and 600 for more than two years.  Over 1,400 of these foreclosed properties were listed at more than $300,000.

The situation is even worse than in Chicago, however.  Loan Performance, a division of Core Logic, tracks those metros with the highest percentage of seriously delinquent prime mortgages.  This included loans that are either delinquent for more than 90 days or in the process of foreclosure.  The Miami metro had the highest percentage of any metro in the country at the end of this year's first quarter - 28%.  This means that more than ¼ of all outstanding prime mortgages in Miami were either in the foreclosure process or almost certainly heading there.

The cure rates tracked by Core Logic tell us that practically all of these serious delinquencies will eventually follow the 22,000+ defaulted properties into foreclosure or short sales.  The reluctance of banks to put higher end foreclosures onto the market will do nothing except delay the inevitable collapse in prices of homes purchased for $300,000 and above during the bubble years.

Orange County is situated between Los Angeles and San Diego.  With a population of roughly 3 million, it includes such cities as Irvine, Santa Ana, and Anaheim as well as the tony towns of Newport Beach and Laguna Beach.

Like so much of California, the housing collapse after the bubble peak has been severe.

As of July 16, RealtyTrac listed 6,270 repossessed properties.  Although 3,200 of them have been taken back by banks within the last six months, 650 have been in the inventory of banks for more than two years without having been placed on the market.  As with Cook County and Miami-Dade County, very few foreclosed homes in Orange County are listed for sale - 227.

The inventory of homes for sale rose steadily in the second quarter of 2010 according to the Orange County Real Estate Blog.  Short sales now comprise 20-30% of all sales in most cities in Orange County and this has put downward pressure on home prices.  Had the banks placed more of their REOs on the market, prices would have very likely crumbled on the upper end.  When banks finally release these repossessed and defaulted homes to the market, which is what will happen.

Finally, let's take a look at the Northeast.  Bergen County is made up of fairly affluent communities which are located in northern New Jersey just west of the George Washington Bridge.  Although home prices have dropped rather substantially since the peak, it has not been nearly as bad as in California or Florida.

RealtyTrac listed 615 repossessed properties as of July 16.  Roughly 120 have been owned by the banks for more than a year without having been placed on the market.  Two-thirds have been repossessed since the beginning of 2010.

Similar to the three other counties we have reviewed, many of the foreclosed properties in Bergen County are expensive homes.  More than 100 are listed on RealtyTrac for $500,000 and above.  More than 350 of these homes are listed for at least $300,000.

Are the banks withholding most foreclosed properties from the market as banks have in the other three counties?  Absolutely.  On July 16, there were only 31 repossessed homes on the market.  A total of four were listed higher than $300,000.  That is four out of more than 350 foreclosed homes in Bergen County that are listed on RealtyTrac for more than $300,000.

Bank Withholding of High-End Foreclosures from the Market is Nationwide

The four counties which we have looked at reveal a clear pattern on the part of banks to withhold most repossessed homes from the market and nearly all of those listed on RealtyTrac for more than $300,000.  Is this occurring throughout the nation?  Take a look at the following table and judge for yourself. 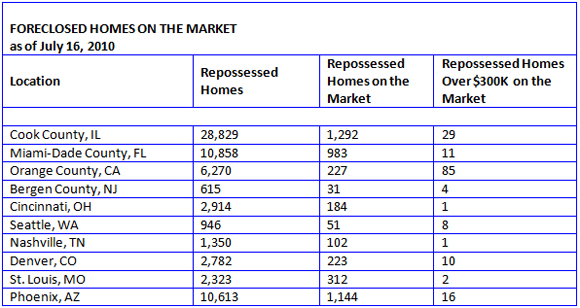 Will this bank strategy keep the market for homes over $300,000 from imploding?  Not a chance.

Fannie Mae now requires an average down payment of 30% for securitized loans which it purchases or guarantees.  According to Fitch Ratings, mortgage delinquencies for prime jumbo mortgages soared to 10.3% in May as underwater owners walked away in droves.  That spells serious trouble for the five states which account for 2/3 of all outstanding jumbo loans - California, Florida, New Jersey, Virginia and New York.  The problem goes well beyond these states, however.  Housing markets throughout the United States for $300,000+ homes are in for rough sailing and prices are extremely likely to be headed for a real plunge.