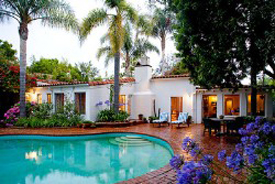 Marilyn Monroe House Up for Sale

The only home Marilyn Monroe ever owned, where she was found dead on Aug. 5, 1962, is on the market.

The Spanish colonial house, built in 1929, is located on a secluded cul-de-sac in the Los Angeles suburb of Brentwood, which was also home for O.J. Simpson, celebrity scandal historians will note. Listed by David Offer of Prudential California Realty, the house, described as a "hidden jewel," is only 2,600 square feet, relatively small for an A-list Los Angeles celebrity retreat, but the lot is a whopping 23,200 square foot, including a small pool and citrus groves.

Monroe reportedly paid $90,000 for the house, and she was paying $320 a month in mortgage payments at the time of her death from an overdose of pills. According to legend, a plaque near the door read, "Cursum Perficio," Latin for "My Journey Ends Here," RealEstalker notes.

The listing price is $3.595 million, which seems like a bargain. Last year a burial spot next to Monroe's in Westwood reportedly sold for $4.6 million, the Daily Mail notes. And, in the realm of jaw dropping amenities, what would impress dinner guests more than saying, "Oh, by the way, Marilyn Monroe died here."