In every month this year, the median price for existing home sales in the metropolitan Washington, DC area exceeded the corresponding month in 2009 until August when it declined for the first time, both month‐over‐month and month‐over‐year. The preliminary August median was $345,000, down 2.8 percent from July. However, the median in August was still 6.2 percent higher than it was at this time last year. The yearto‐date median sales price was $324,900 in August, 4.8 percent higher than the 2009 median.

Typically, existing home sales in the metropolitan Washington, DC market peak in June. Such was the case since 2006 (with the exception of 2009 when total sales peaked in July). Further, sales are expected to decline in the second half of the year given the industry's cyclical characteristics. Following form, preliminary total sales figures declined 5.3 percent in August 2010 (4,579 units) compared to revised July numbers. After four months of increases compared to the corresponding month in 2009, sales in August were 18.4 percent below the August 2009 level. As of August, annualized 2010 sales in metro DC total 58,901 units ‐ just .7 percent below 2009 total sales.

According to Virginia‐based real estate consultant Rosemary deButts, "Existing home sales activity in 2010 was trending well above 2009 levels until August when they dropped sharply and unexpectedly in July and August. However, median sales prices remain higher than at any time last year."

Pending sales, which may or may not close in the future, ended the month at 2,773 units. NVAR had the highest pending sales total (978 units) while Washington, DC had the lowest (210 units).

The market is assumed to be in equilibrium ‐ there is enough supply to satisfy demand ‐ when the month's supply of inventory is between four and five months. Based on the active listings as of September 8, 2010, the metro DC area had 4.1 months supply of available inventory, on the low side of equilibrium. PWAR, which was particularly plagued by distressed sales over the last few years, had the lowest available supply at 2.5 months and is significantly undersupplied. Prince George's County and Washington, DC had the highest supply in August, 5.3 months, slightly above equilibrium.

The average days on market indicator rose 8.7 percent in August from July to 59 days. However, it has been significantly below corresponding averages in 2009 all year and posted a 22.6 percent decline compared to August 2009. For the sake of comparison, the average was 111 days in January 2009.

Short sales and foreclosures (distressed sales) are abating in the nation's capital. After reaching a high of 45.5 percent of total sales in January 2010, the share of distressed was 29.4 percent in August, the fourth consecutive month below or equal to 30 percent. 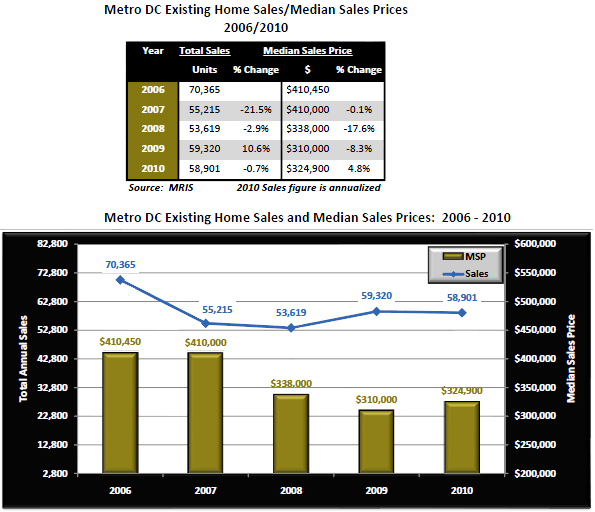 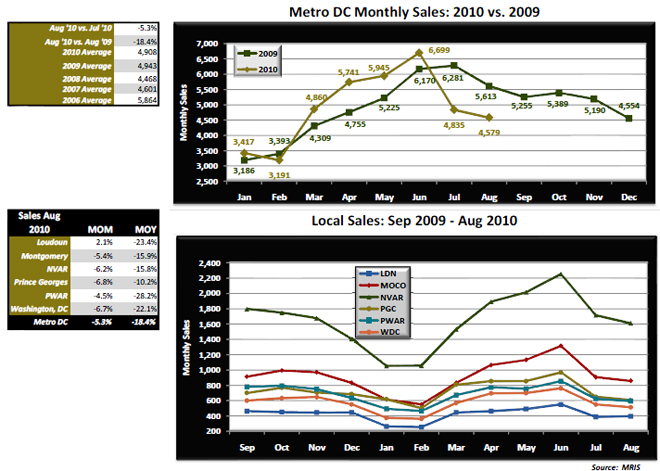