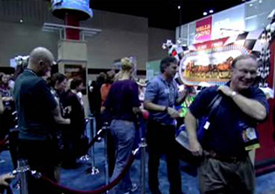 (SAN DIEGO, CA) -- Within two weeks of Congress passing an extension and expansion of the home buyer tax credit program through mid-2010, the feeling of renewed optimism and energy was in the air at the annual National Association of Realtors convention in San Diego this past weekend.

With over 20,000 attendees from across the U.S. and globally, the NAR convention was a gathering place this week of many of the top real estate executives, economists, practitioners and vendors of the real estate marketplace. Additionally, several nationally known dignitaries and celebrities made guest appearances such as former Secretary of State Condoleezza Rice, and actor William Shatner of Star Trek and Boston Legal fame.

At a scheduled press conference, NAR introduced Vicki Cox-Golder as their new incoming President for 2010.

Ms. Golder stated in her press conference that her goals in 2010 primarily included, "Providing more liquidity to the real estate marketplace, get kinks out of the appraisal process, reduce restrictions on lending and further encourage our Realtors to really know their local markets."

Robb Heering, founder & CEO of Casa Latino, a national real estate brokerage firm with 85 offices in 16 States catering to the Hispanic marketplace commented, "I see renewed hope in certain markets, but still declines in others in 2010." "But I also see the booming Hispanic population being responsible for increased sales in certain markets across the U.S. in 2010 as well."

Dawn Kennedy, CEO of the Oklahoma City Metropolitan Association of Realtors commented, "Living in the heart of the USA, Oklahoma has not realized the dramatic market declines experienced by most. However, economic trends tend to work their way inward and I had anticipated  a noticeable decline in the first quarter of 2010 but believe the extension and expansion of the first time homebuyers' tax credit will stave off any slowdown in residential sales."

NAR's senior economist Lawrence Yun also held a separate press conference and released some telling numbers and market predictions for 2010 that included; sales activity continuing to rise by as much as 15% in 2010, the reduction in inventory to just a 6-7 month national supply, and housing prices stabilizing and even showing a modest 3% to 5% appreciation by the end of 2010.

But Yun did admit that there are some issues that remain in 2010 that include increased foreclosures through mid-2010 and continued rising unemployment.

He further commented, "The fear factor that many consumers had in 2009 when it came to buying a home will be replaced by rational decision making and market data in 2010".

Other real estate market predictions made by Lawrence Yun for 2010 included;

When asked, "what keeps you up at night for 2010", Yun replied "Inflation". "When inflation goes up, so does interest rates!"