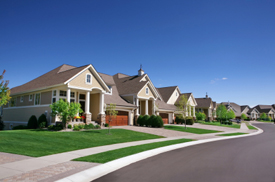 
(WASHINGTON, D.C.) -- Driven by the first-time buyer tax credit, existing-home sales showed another big gain in October with a strong uptrend established over the past seven months, while inventories continue to decline, according to the National Association of Realtors.

Existing-home sales - including single-family, townhomes, condominiums and co-ops - surged 10.1 percent to a seasonally adjusted annual rate of 6.10 million units in October from a downwardly revised pace of 5.54 million in September, and are 23.5 percent above the 4.94 million-unit level in October 2008.  Sales activity is at the highest pace since February 2007 when it hit 6.55 million.

Lawrence Yun, NAR chief economist, was surprised at the size of the gain.  "Many buyers have been rushing to beat the deadline for the first-time buyer tax credit that was scheduled to expire at the end of this month, and similarly robust sales may be occurring in November," he said.  "With such a sale spike, a measurable decline should be anticipated in December and early next year before another surge in spring and early summer."

Now that the tax credit has been extended and expanded, potential buyers have until April 30 to have a contract in place. "There is still a large pent-up demand that can be tapped before the tax credit expires.  Our recent consumer survey further shows that 13 percent of successful first-time buyers had a previous contract that was cancelled or fell through - there likely are many more buyers who were attempting to purchase but simply ran out of time," Yun said.

Historically low interest rates also are boosting the market.  "Mortgage interest rates last month were the third lowest on record dating back to 1971," Yun noted.  According to Freddie Mac, the national average commitment rate for a 30-year, conventional, fixed-rate mortgage fell to 4.95 percent in October from 5.06 percent in September; the rate was 6.20 percent in October 2008.  Last week, Freddie Mac reporter the 30-year rate dropped to 4.83 percent.

NAR President Vicki Cox Golder, owner of Vicki L. Cox & Associates in Tucson, Ariz., said strong demand by first-time buyers is creating some unusual conditions.  "In parts of the country, especially in Southwestern states but also in Florida and suburban Washington, D.C., we've been getting many reports of multiple bids in the lower price ranges with foreclosed properties getting absorbed quickly," she said.

"In fact, low-end inventory has become very tight in many areas and in some cases buyers are becoming more aggressive.  In this kind of environment it's important to work with a Realtor® who can walk you through the process and help you negotiate a satisfactory deal," Golder said.

Total housing inventory at the end of October fell 3.7 percent to 3.57 million existing homes available for sale, which represents a 7.0-month supply at the current sales pace, down from an 8.0-month supply in September.  Unsold inventory totals are 14.9 percent below a year ago.

"The supply of homes on the market is now at the lowest level in over two-and-a half years - we're getting closer to a general balance between buyers and sellers," Yun said.  The last time the relative housing inventory was this low was in February 2007 when it also was at a 7.0-month supply.

The national median existing-home price for all housing types was $173,100 in October, down 7.1 percent from October 2008.  Distressed properties, which accounted for 30 percent of sales in October, continue to downwardly distort the median price because they usually sell at a discount relative to traditional homes in the same area.

"In the second half of 2010, if home values show consistent stabilization or even a modest increase, then home sales could remain at normal healthy levels because consumers would no longer be worried about a price overcorrection," Yun said.

He added that low home prices also are contributing to extremely favorable affordability conditions.  "With the abnormal drop in home prices over the past few years, the price-to-income ratio has fallen below the historic trend line," Yun said.  "This is adding to the buying power of the typical family, with affordability conditions this year at the highest on record dating back to 1970, but prices are beginning to flatten and are poised to rise next year."