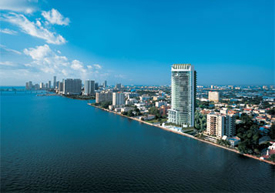 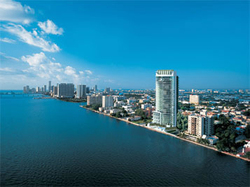 Onyx on the Bay, Miami

According to a new report from Condo Vultures, the U.S. Bankruptcy Court plans to auction off a block of the remaining 40 developer units in a new, waterfront condominium tower fronting Biscayne Bay in Greater Downtown Miami.

On Oct. 5, the U.S. Bankruptcy Court is scheduled to sell off more than 60,000 square feet of livable space, 56 parking space reservations, and 15 storage areas in the 28-story Onyx on the Bay condo tower to cover some of the outstanding construction debt of more than $22.3 million still owed by the developer, according to U.S. Bankruptcy Court Southern District of Florida records.

The opening auction bid amount is set to effectively start at $7 million, which equals the current 2010 assessed value for the block of units set by the Miami-Dade County Property Appraiser. The winning bidder must also cover a host of additional costs that are required to complete the nearly finished building and satisfy the unpaid property taxes, according to the court order signed by U.S. Bankruptcy Court Judge A. Jay Cristol.

"The auction should finally bring closure to the drama that has surrounded this distinct, waterfront project that was delivered simply about a year too late," said Peter Zalewski, a principal with the Bal Harbour, Fla.-based Condo Vultures, LLC. "If purchased at the right price, some bulk buyer is going to amass a sizable block of new units with waterfront views in Greater Downtown Miami that could have upside going forward. As is always the case, the key will be purchasing at the right price."

Built in 2007, the Onyx on the Bay is comprised of 118 units with more than 150,000 square feet of livable space. The developer sold 78 units at an average of $389 per square foot between August 2007 and February 2009. The individual units transacted between $256 per square foot to a high of $526 per square foot, according to the Condo Vultures.

Onyx on the Bay was developed by Biscayne Bay Lofts LLC, with Willy A. Bermello and Gustavo Miculitzki, using a $44.1 million construction loan obtained in October 2004 from the now defunct Corus Bank.

Right before Corus Bank was shuttered by regulators, the loan for Onyx on the Bay was sold to the investment entity Hyperion Onyx Partners LLC. The investment entity continued to move to repossess the units through the foreclosure process that was initiated by the original construction lender in May 2009, according to the Condo Vultures.

In February 2010, creditors filed a petition seeking to force the developer into a Chapter 7 involuntary bankruptcy liquidation seeking repayment of $1.05 million, according to original court document. Subsequent bankruptcy cases have since been initiated.

In August 2010, Judge Cristol signed an order clearing the way for a "Bankruptcy Auction Sale in open court and then a closing as soon as practicable thereafter," according to court papers.

There have been 22 transactions in Greater Downtown Miami representing more than 1,900 units and 2.7 million square feet at an average of more than $215 per square foot, according to a recent Condo Vultures report.

Overall, bulk buyers have transacted more than 60 condo deals in South Florida since July 2008, accounting for more than 6,000 units with 7.1 million square feet for a combined $1.6 billion.

Developers constructed some 22,250 new condo units in Greater Downtown Miami between 2003 and 2010, effectively tripling the amount of inventory that had been constructed in the four previous decades.

At the end of the second quarter of 2010, there were still some 5,800 new condo units still unsold in Greater Downtown Miami, including 870 units in the ICON Brickell condominium that were transferred in May to an entity controlled by the project's construction lender HSBC Bank USA.

For the last four quarters, buyers have purchased more than 700 units per three-month period for a total of more than 2,800 transactions. Some 80 percent of these units were sold to individuals rather than groups buying in bulk.

The average price per square foot for a new unit in Greater Downtown Miami at the end of the second quarter was $333, according to Condo Vultures.