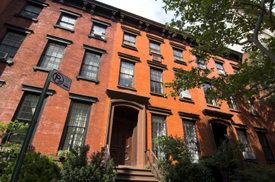 Many commentators continue to describe the housing market in Queens as surprisingly resilient.  Hardly any has warned of a possible collapse.  Is this a disservice to both sellers and buyers?  Let's take a close look and see.

Introduction to the Queens Housing Market

The borough of Queens in New York City has a population of roughly 2.2 million.  For nearly a century, it has been the bastion of the middle class in the Big Apple.  To put things in perspective, you could have bought a nice two-story attached brick house in south Queens for $16,000 in 1950.  Twenty-five years later, the cost of this same house was still under $30,000.

That began to change as inflation soared into double digits in the late 1970s. At the start of the new millennium, the median price of home sales in Queens had climbed to roughly $168,000 according to trulia.com.  During the bubble years of 2003-2006, home sales soared in Queens and throughout New York City (NYC).  Prices really skyrocketed.

Between 1996 and 2006, the annual number of first lien purchase mortgages originated in NYC more than doubled.  Citywide, a record of more than 50,000 owner-occupied homes were sold in 2006.  That year, the median size of a first lien purchase mortgage climbed to $384,000 according to the Furman Center for Real Estate and Urban Policy.  That nice brick house in south Queens actually sold in 2005 for a whopping $360,000.

As we saw in a previous REAL ESTATE CHANNEL article, the mortgage problem was exacerbated by the growing use of piggyback second liens to cover the 15-20% of the purchase price which the first mortgage did not.  In 2006, 28% of all New York City buyers took out piggyback seconds.  The Furman Center found that 43% of purchasers with incomes from $100,000 to $150,000 used a piggyback second mortgage.

According to trulia, home sales in Queens soared to a record of more than 20,000 in 2005.  The following year, the median price of all existing homes sold reached roughly $500,000.

While most bubble housing markets weakened in 2006 and then plunged in 2007-2008, the NYC market remained relatively robust because of the roaring stock market.  But quite unnoticed, sales volume began declining.  After the stock market peaked in the summer of 2007, the housing market began to unravel.

The Looming Default Disaster in Queens

According to RealtyTrac.com, as of June 16 there were 9,054 Queens residences which the banks had placed into default since the middle of February 2009.  Of these, 2,550 have been in default for more than a year.  None has been foreclosed by the banks yet.  Every one of these owners who is occupying the property has been living basically rent-free since stopping the mortgage payment.

When RealtyTrac is unable to obtain the outstanding mortgage debt figure, it lists the amount for which the owner is in arrears.  Here is the real shocker.  More than 3,500 properties have arrearages listed, some as high as $100,000.  Roughly 280 of these owners owe anywhere from $25,000 to $100,000 in delinquent mortgage payments.  Those with arrearages of roughly $100,000 have not paid a cent to the lender in about three years.  Nice deal isn't it?  Let's not feel too sorry for these poor folks.

Without a doubt, the word has spread throughout Queens that the banks are not foreclosing on owners who stop making mortgage payments.  It is not very surprising, then, that an incredible 11.2% of all borrowers are now delinquent in their payments by 60 days or more.  This figure comes from Trans Union, the credit-reporting firm, which puts out a quarterly mortgage delinquency study based on a database of 27 million anonymous credit reports.  That is up from only 7.2% a year earlier.  The chart below shows how the serious delinquency rate has skyrocketed in the last three years. 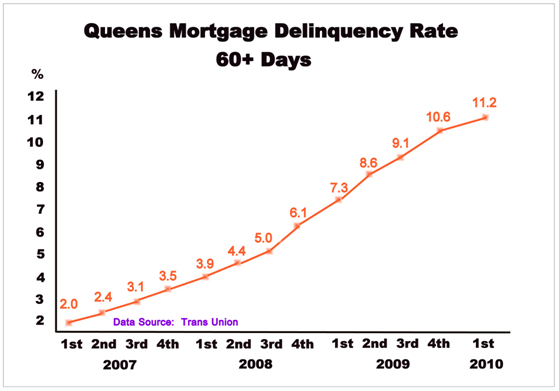 How many delinquent owners are we talking about?  The borough has roughly 250,000 single-family homes and another 240,000 units in 2-4 family houses owned by investors.  Even assuming that roughly 1/3 of these owners are mortgage-free, at least 25,000 properties are seriously delinquent now.  We know from Core Logic's monthly mortgage report that nearly all of these seriously delinquent borrowers will eventually default.  That is 25,000 additional properties which will eventually have to be foreclosed and repossessed by the banks.  Meanwhile, they are living rent-free and pocketing perhaps $3,000-$4,000 a month.  Investors who own 2-4 family houses may also still be collecting rent.  Sort of makes your blood boil, doesn't it?

What About the Foreclosed Properties Owned by the Banks?

You would think that with so many delinquent and defaulted homeowners in Queens, there would now be a huge number of homes owned by the banks and sitting in their inventory (REOs).  Wrong.

RealtyTrac showed a total of only 1,389 homes in the banks' repossessed inventory as of June 16.  Nearly 400 have an outstanding mortgage debt exceeding $500,000.  Dozens of these properties have been owned by the banks for more than two years.

You may have read something lately about how banks nationwide are unloading their REOs at a faster pace now.  Not in Queens.  RealtyTrac lists a total of 12 properties which the banks have up for sale now.  That's right - 12.  Why only twelve?  Who knows?  The banks are clearly concerned that if they dump too many of their REOs onto a housing market that is now so thin, this will severely depress prices.  They would also have to write down the actual losses on their balance sheet.

What is the State of the Housing Market Now in Queens?

Are homes selling now in Queens?  Hardly.  According to MDA DataQuick, which culls its figures from county recorder offices, the median price of all new and existing single-family homes and condos sold in the first quarter of 2010 was $403,000.  That isn't too bad a drop from the peak, right?  The problem is that only 1420 new and existing single-family properties were sold during this latest quarter.  That is an average of only 473 per month.  We are talking about a county with 2.2 million people and nearly 500,000 housing units (excluding multi-family apartment buildings).

By way of comparison, let's take a look at Houston with a population slightly smaller than Queens.  According to the Houston Association of Realtors, sales of all existing homes in the Greater Houston area in May totaled 6,659.  Why such a difference?  Simple.  The median price of Houston sales was only $155,000.

With the market in Queens so awful, are home sellers cutting their asking price?  Not really.  Trulia reveals that only 24% of all homes listed there now have had the asking price dropped by the owner since being posted on the website.  That seems crazy, doesn't it?  True, some of these owners are probably not what we might call serious sellers.  They don't have to sell and are just "testing the waters."

What about those who either really want to sell their home or are distressed and must sell the property?  Don't they need to lower their asking price, perhaps substantially, in order to find a buyer?  Absolutely.

Even more important, what happens when the banks start putting into default the 25,000 seriously delinquent homeowners and foreclosing on the 9,000+ properties currently in default?  This overhang waits like a potential tsunami that we know will follow when an earthquake measuring 9.1 erupts underwater as it did in late 2004.

Sooner or later, the banks will have to begin whittling down the growing number of delinquent and defaulted properties in Queens.  What will happen to prices when the banks finally start to place this potentially enormous REO inventory on the market?  Simple.  Prices will plunge.  Make no mistake, it will be ugly.

Those who currently have their home on the market in Queens need to see what's coming down the road.  If they refuse to lower their asking price substantially, they will almost certainly regret that decision in the next year or two.  Furthermore, prospective buyers probably ought to seriously consider whether waiting might be the more prudent course of action.

To a lesser extent, this analysis also applies to the three other outlying boroughs of Brooklyn, the Bronx, and Staten Island.