According to Standard & Poor's February 2010 S&P / Case-Shiller Home Price Indices, show that the annual rates of decline of the 10-City and 20-City Composites improved in February compared to January 2010. 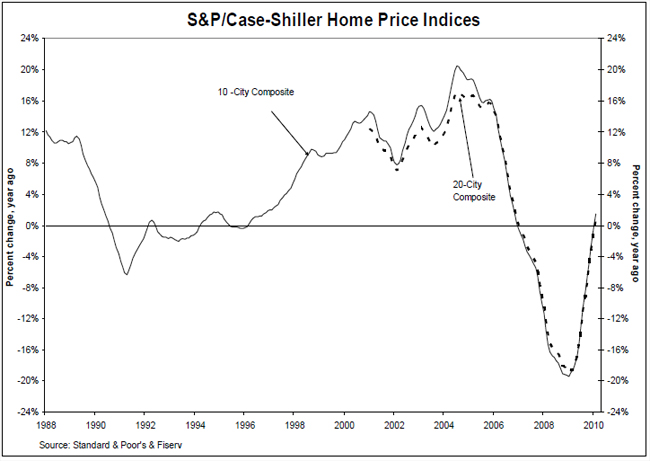 The chart above depicts the annual returns of the 10-City and 20-City Composite Home Price Indices with an increase of 1.4% and 0.6%, respectively, in February 2010 compared to the same month last year. Eighteen of the 20 metro areas and both Composites showed an improvement in their annual rates with this month's readings compared to the January 2010 figures; with Dallas and Portland being the exceptions.

"Beginning last November, each report showed gains as fewer cities reported year-over-year declines than in the previous month; those gains ended with this report. Further, in six cities prices were at their lowest levels since the prices peaked three-to-four years ago. These data point to a risk that home prices could decline further before experiencing any sustained gains. While the year-over-year data continued to improve for 18 of the 20 MSAs and the two Composites, this simply confirms that the pace of decline is less severe than a year ago. It is too early to say that the housing market is recovering" says David M.

Blitzer, Chairman of the Index Committee at Standard & Poor's. "Nineteen of the 20 MSAs and both Composites declined in February over January. Fourteen of the MSAs and both Composites have now fallen for at least four consecutive months. In addition, prices reached recent new lows for six cities in February - Charlotte, Las Vegas, New York, Portland, Seattle and Tampa - sending a more cautionary message compared to the annual figures. While 14 MSAs and the two composites show improvement over their trough values reached in the spring 2009, we are not completely out of the woods.

"Existing and new home sales, inventories and housing starts all show tremendous improvement in their March statistics. The homebuyer tax credit, available until the end of April, is the likely cause for these encouraging numbers and this may also flow through to some of our home price data in the next few months. Amidst all the news, however, we should also pay heed to foreclosure activity, which have reached their highest level in at least the last five years. As these homes are put up for sales, we may see some further dampening in home prices." 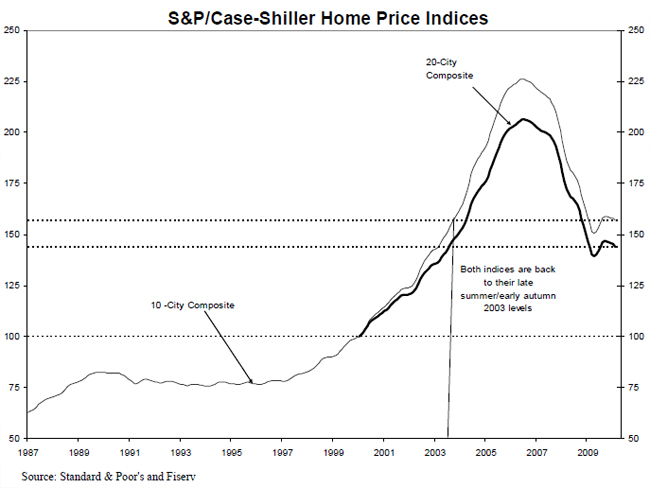 San Diego was the only market that continued to show improvement in home prices between January and February. All other metros and the two composites showed declines from their January levels, some of these being fairly significant, with 12 of the MSAs falling by at least 1.0% during the month. Six of the MSAs - Charlotte, Las Vegas, New York, Portland, Seattle and Tampa - posted new index lows as measured in the current housing cycle where, depending on the market, we saw peaks in 2006 and 2007.

Charlotte and Cleveland have shown seven consecutive months of negative monthly returns. Atlanta, Boston, Denver, New York and Tampa are not far behind, with six consecutive negative prints. Six of the 20 MSAs - Atlanta, Denver, Las Vegas, San Diego, Seattle and Washington DC - showed some
improvement in monthly returns compared to the prior month.

The table below summarizes the results for February 2010. 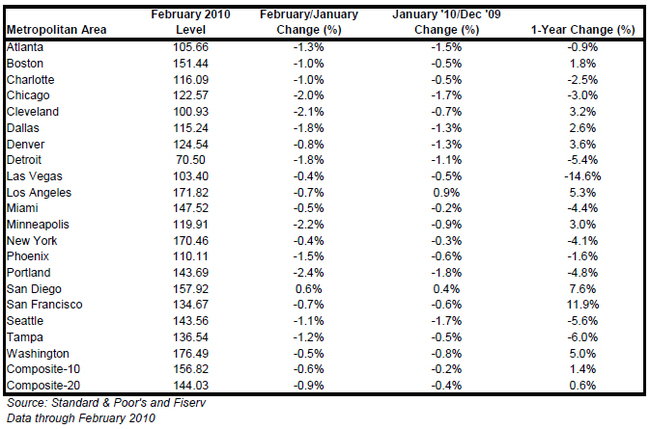 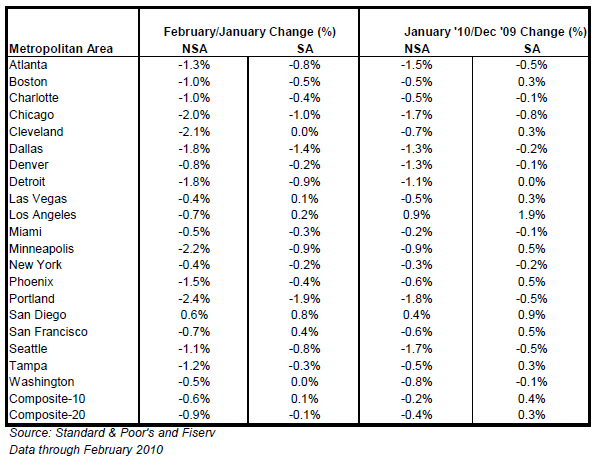