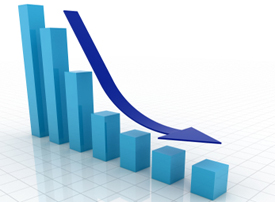 The chart above depicts the annual returns of the 10-City and 20-City Composite Home Price Indices with increases of 2.6% and 1.7%, respectively, in August 2010 compared to the same month in 2009. In August, 12 of the 20 MSAs posted negative annual growth rates. This is two more than what was reported in July, as Detroit and Miami posted negative annual rates in August. While still negative, three of the 20 MSAs saw improvement in year-over-year growth rates in August as compared to July. They are Charlotte, Cleveland and Las Vegas with annual growth rates of -3.4%, -0.4% and -4.5%, respectively. Annual growth rates slowed down in the three California cities, with Los Angeles, San Diego and San Francisco posting annual gains of +5.4%, +6.9% and +7.8%, respectively - a significant drop from the +7.5%, +9.3% and +11.2% reported for July.

"A disappointing report. Home prices broadly declined in August. Seventeen of the 20 cities and both Composites saw a weakening in year-over-year figures, as compared to July, indicating that the housing market continues to bounce along the recent lows," says David M. Blitzer, Chairman of the Index Committee at Standard & Poor's. "Over the last four months both the 10- and 20-City Composites show slowing growth, after sustaining consistent gains since their April 2009 troughs.

"The month-over-month growth rates tell the same story. Fifteen of the 20 MSAs and the two Composites saw a decline in the month of August as compared to July levels. The 10- and 20-City Composites fell 0.1% and 0.2%, respectively. Indeed, the housing market appears to have stabilized at new lows. At this time, it does not seem that any of the markets are hanging on to the temporary momentum caused by the homebuyers' tax credits."

With August data, we find that 15 of the 20 MSAs and both Composites saw prices fall from their July values. Chicago, Detroit, Las Vegas, New York and Washington DC were the only five cities that recorded marginal improvements in home prices over July. The 10- and 20-City Composites were down 0.1% and 0.2%, respectively, in August versus July.