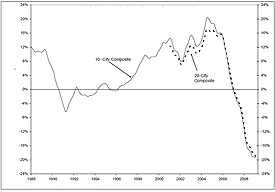 (NEW YORK, NY) -- Data through February 2009, released today by Standard & Poor's for its S&P/Case-Shiller Home Price Indices, the leading measure of U.S. home prices, shows continued broad based declines in the prices of existing single family homes across the United States, with 10 of the 20 metro areas showing record rates of annual decline, and 15 reporting declines in excess of 10% versus February 2008. For the first time in 16 months, however, the annual decline of the 10-City and 20-City composites did not set a new record. 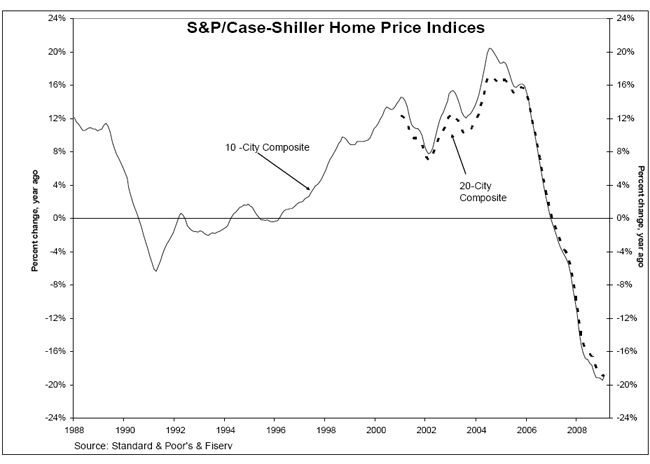 "While the declines in residential real estate continued into February, we witnessed some deceleration in the rate of decline in some of the markets," says David M. Blitzer, Chairman of the Index Committee at Standard & Poor's. "All 20 metro areas recorded a monthly decline in February, but 16 of the 20 metro areas saw an improvement in their monthly returns compared to January. Nine of the 20 metro areas showed improvement in their annual returns compared to their returns in January. Furthermore, this is the first month since October 2007 where the 10- and 20-City Composites did not post a record annual decline. We will certainly need a few more months of data before we can determine if home prices are finally turning around." 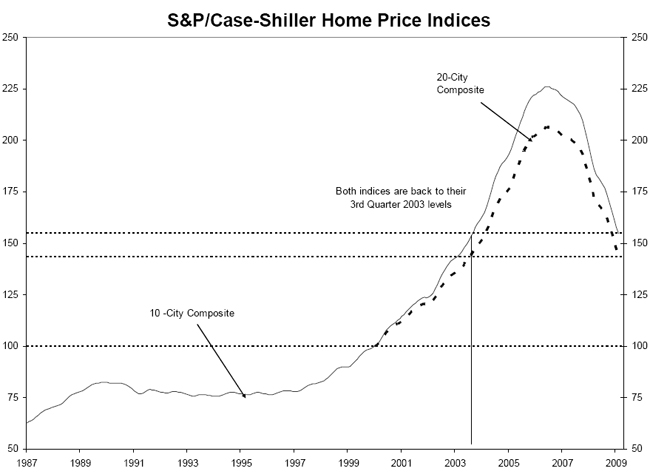 All 20 metro areas reported negative monthly and annual rates of change in average home prices in February. In January's report, seven metro areas and the 20-City Composite posted record monthly declines. In February, Cleveland was the only metro area having a record monthly decline, returning -5.0%. Cleveland, Charlotte, New York and Washington were the only MSA's showing larger declines in home prices in February compared to January's report.

In terms of annual declines, the three worst performing cities continue to be from the Sunbelt, each reporting negative returns in excess of 30%. Phoenix was down 35.2%, Las Vegas declined 31.7% and San Francisco fell 31.0%. Dallas, Denver and Boston faired the best in terms of annual declines down 4.5%, 5.7% and 7.2%, respectively. Dallas also had the distinction of being the best performer for the month, returning -0.3%.

Looking at the data from peak-thru-February 2009, Dallas has suffered the least, down 11.1% from its peak in June 2007; while Phoenix is down 50.8% from its peak in June of 2006. The rates of decline from the respective peak of each market are evidence of how much each market has given back from the gains earned in the past 10-15 years. All of the 20 metro areas are in double digit declines from their peaks, with ten of the MSA's posting declines of greater than 30% and seven of those -- Detroit, Las Vegas, Los Angeles, Miami, Phoenix, San Francisco and San Diego -- in excess of 40%. 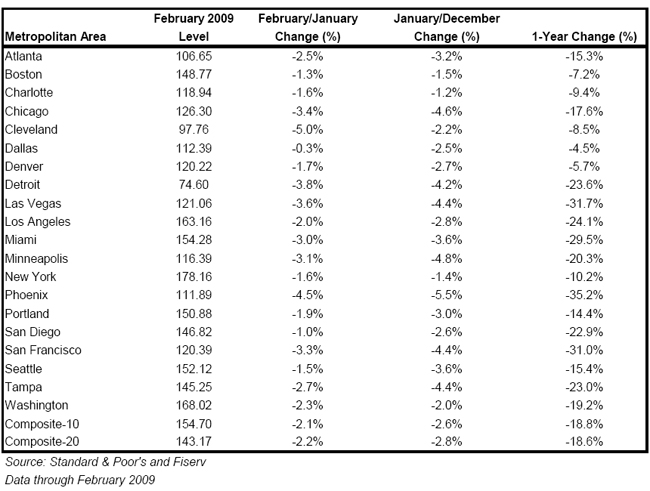