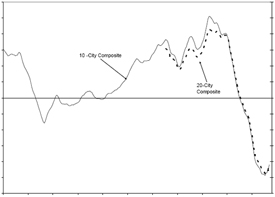 (NEW YORK, NY) -- Data through May  2009, released today by Standard & Poor's for its S&P/Case-Shiller Home Price Indices, the leading measure of U.S. home prices, show that, although still negative, the annual rate of decline of the 10-City and 20-City Composites improved for the fourth consecutive month in 2009. 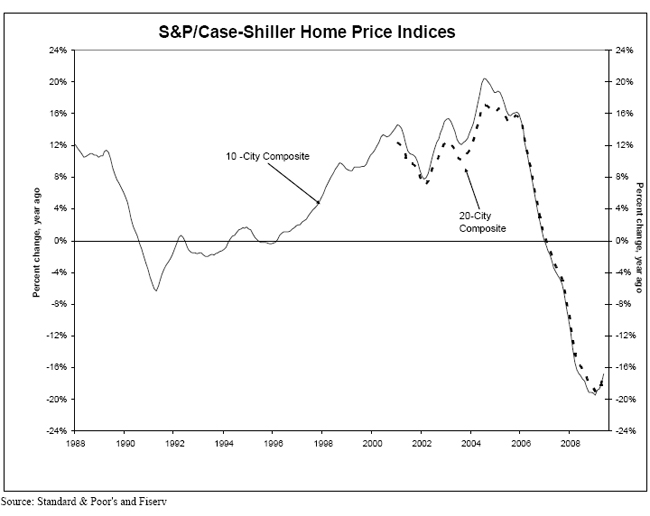 The chart above depicts the annual returns of the 10-City and 20-City Composite Home Price Indices. The 10-City and 20-City Composites declined 16.8% and 17.1%, respectively, in May compared to the same month last year. These values are improvements over April's data, which show annual declines of 18.0% and 18.1%, respectively.   After 16 consecutive months of record annual declines, beginning in October 2007 and ending in January 2009, the indices have now shown four consecutive months of improvement in annual returns.

"The pace of descent in home price values appears to be slowing" says David M. Blitzer, Chairman of the Index Committee at Standard & Poor's. "There is a clear inflection point in the year-over-year data, due to four consecutive months of improved rates of return, after the steep decline that began in the fall of 2005.  In  addition  to  the 10-City  and  20-City  Composites,  17  of  the  20  metro  areas  also  saw improvement in their annual returns compared to those of April. Looking at the monthly data, 13 of the 20 metro areas reported positive returns; and the 10-City and 20-City Composites reported positive returns for the first time since the summer of 2006.   To put it in perspective, these are the first time we have seen broad increases in home prices in 34 months. This could be an indication that home price declines are finally stabilizing".

"While many indicators are showing signs of life in the U.S. housing market, we should remember that on a year-over-year basis home prices are still down about 17% on average across all metro areas, so we likely do have a way to go before we see sustained home price appreciation." Mr. Blitzer added." 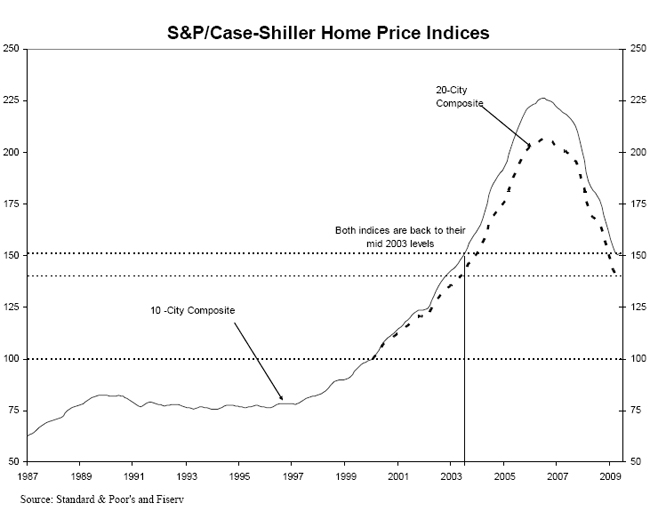 In terms of annual declines, the numbers remain relatively somber with all metro areas and the two composites in negative territory, and 16 out of the 20 metro areas are reporting double digit declines. Las Vegas, Los Angeles, Miami, Phoenix, Seattle and Tampa posted their lowest index levels in May since their respective peaks. From peak to trough Phoenix and Las Vegas are the worst off, down 54.5% and 53.4%, respectively.   More upbeat news is seen in the monthly data; Dallas and Denver have reported three consecutive months of positive returns. Atlanta, Boston, Cleveland, San Francisco and Washington D.C. each reported two consecutive months of positive returns.   Eight of the 13 MSAs reporting positive monthly returns for May were greater than +1.0%.

The table below summarizes the results for May 2009. The S&P/Case-Shiller Home Price Indices are revised for the 24 prior months, based on the receipt of additional source data. 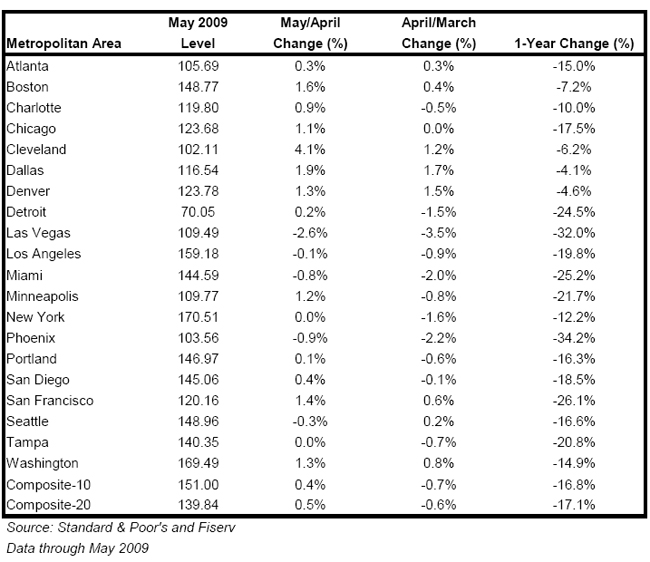