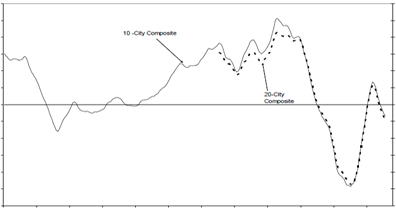 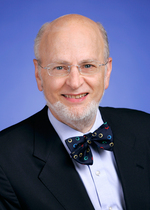 Data through February 2011, released today by S&P Indices for its S&P/Case-Shiller Home Price Indices, the leading measure of U.S. home prices, show prices for the 10- and 20-city composites are lower than a year ago but still slightly above their April 2009 bottom. The 10-City Composite fell 2.6% and the 20-City Composite was down 3.3% from February 2010 levels. Washington D.C. was the only market to post a year-over-year gain with an annual growth rate of +2.7%. Ten of the 11 cities that made new lows in January 2011 saw new lows again in February 2011. 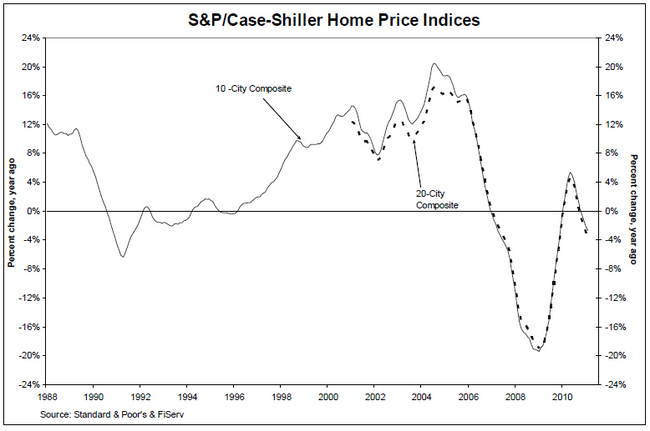 The chart above depicts the annual returns of the 10-City and the 20-City Composite Home Price Indices. In February 2011, the 10-City and 20-City Composites recorded annual returns of -2.6% and -3.3%, respectively. On a month-over-month basis, the 10- and 20-City Composites were both down 1.1% in February versus January. San Diego, which had posted 15 consecutive months of positive annual rates ended its run with a -1.8% annual rate of change in February 2011. Washington DC has assumed that status, with 15 consecutive months of positive annual growth rates beginning in December 2009 through February 2011. Twelve of the 20 MSAs and both Composites fared worse in terms of annual growth rates in February compared to January. Atlanta, Cleveland, Dallas, Detroit, Phoenix, Portland (OR) and Washington D.C. saw improvements in their annual rates of return in February versus January; New York was unchanged.

"There is very little, if any, good news about housing. Prices continue to weaken, while trends in sales and construction are disappointing," says David M. Blitzer, Chairman of the Index Committee at S&P Indices. "Ten of the 11 MSAs that recorded index lows in January fell further in February. The one exception, Detroit, is 30% below its 2000 price level. The 20-City Composite is within a hair's breadth of a double dip. Fourteen MSAs and both Composites have continued to decline month-over-month for more than six consecutive months as of February."

"Recent data on existing-home sales, housing starts, foreclosure activity and employment confirm that we are still in a slow recovery. Existing home sales and housing starts rose in March, but remain close to recent lows. Foreclosure activity showed decreases in mortgage delinquencies in the fourth quarter of 2010, but are still close to historic highs. The nation and 34 states registered a decline in their unemployment rates for March." 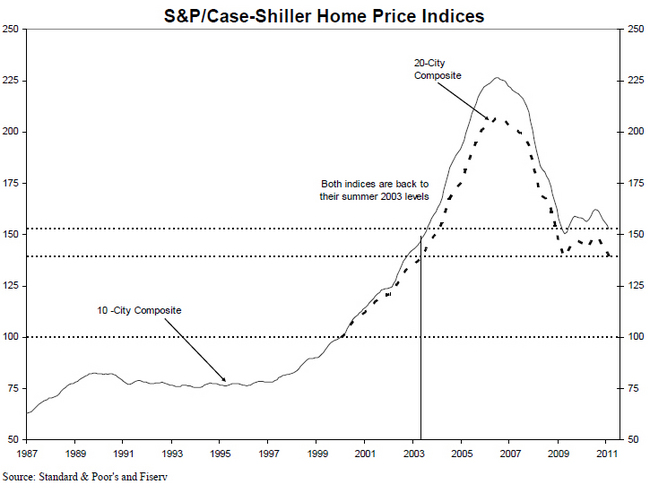 From their 2006/2007 peaks, 10 MSAs posted new index level lows for the third consecutive month in February 2011. These are Atlanta, Charlotte, Chicago, Las Vegas, Miami, New York, Phoenix, Portland (OR), Seattle and Tampa. Detroit, which had posted a recent index level low in January 2011, is the only city that showed a monthly improvement of +1.0% in February 2011. 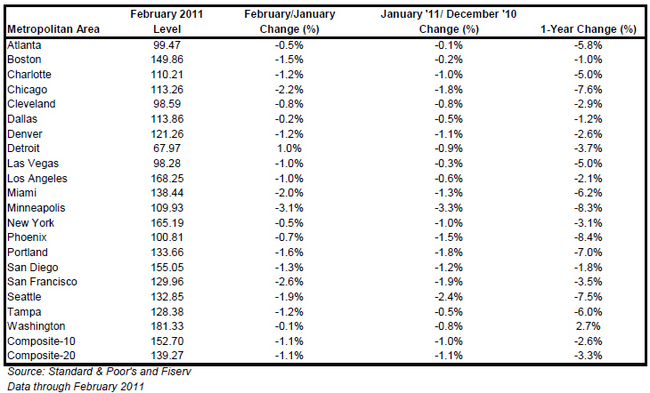