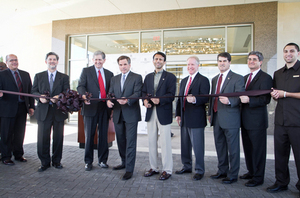 Premier among leading Baton Rouge meeting facilities, the hotel offers 13,000-square feet of flexible, meeting space which features a 7,500 square-foot ballroom and eight large meeting rooms to accommodate business, leisure and group travelers. Guests can also enjoy a fully equipped fitness center and a courtyard-style outdoor pool including a deck and a nearby fire-on-water infinity fountain.

Tallulah Crafted Food and Wine Bar, the hotel's new casual upscale restaurant, joins a growing number of Baton Rouge restaurants on Bluebonnet Boulevard. The restaurant, which shares its name with the town of Tallulah, Louisiana, serves notable, indigenous cuisine from around the state, and features a house-crafted menu that incorporates local flavors in fresh and unique ways.

The hotel's exterior design and vibrant interiors owe their distinctive look to Gensler, a global design, planning, and strategic consulting firm, who worked with local art consultant Ann Connelly and her team of artists to create a strong visual impact throughout the hotel that celebrates Louisiana's indigenous art, culture and heritage. From the lobby to the luxury suites, from the meeting rooms to the guest rooms, business and leisure travelers who are passionate in their search for local discoveries will revel in the whimsical beauty that is the Renaissance Baton Rouge Hotel.

"This project has been years in the making and I am extremely proud and pleased, that with the help of many visionaries and supporters, we were able to deliver such a game-changing hotel property to the people of Baton Rouge," said Mike Wampold, chief executive officer for Wampold Companies.

As one of the top Baton Rouge, Louisiana hotels near LSU, our close proximity to LSU Tiger Stadium, the State Capitol, downtown Baton Rouge and upscale shopping makes this an ideal locale for business guests and group travelers, as well as for weekend getaways and tailgating. Located 1 mile south of Interstate 10 at the corner of Bluebonnet Boulevard and Anselmo Lane, the Renaissance Baton Rouge Hotel is conveniently situated between the Mall of Louisiana, the area's major regional shopping mall, and Perkins Rowe, a popular upscale lifestyle center.

Wampold Companies, founded in 1981 by Mike Wampold, has built a solid reputation of proven performance in the areas of real estate development, construction, major capital renovations and property management. Wampold is the developer/owner of the new 256-room Renaissance Baton Rouge Hotel on Bluebonnet Boulevard.

Renaissance Hotels is an upscale brand with more than 145 properties in 32 countries.