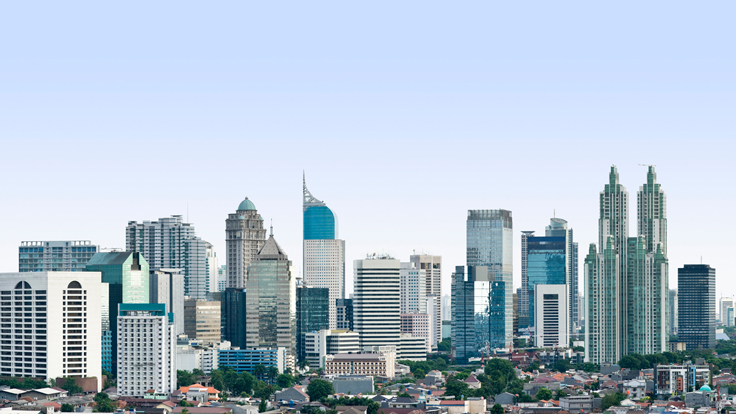 
The office market in Jakarta is forecast to witness the highest rental rate growth through 2015, with rents on track to increase almost 30 percent, according to Cushman & Wakefield.

The Indonesia capital leads the global office market growth forecast for the second year in a row, with rates more than double the level in 2011. The growth already seen in Jakarta has positioned it as Asia's hottest market.

The Dublin and Boston office markets rank second and third, respectively, and join Jakarta as the regional leaders among the top cities forecast for highest rental rate growth in the next two years. 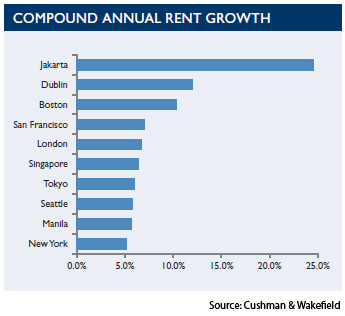 As a whole, the global office market is expected to record steady growth in 2014, with a more robust market in 2015 with continued recovery and renewed confidence in business gains, according to the report.

In the Americas, technology and energy continue to be main drivers for the U.S. real estate recovery, with Boston forecast for 22 percent increase in prime asking rents. On the other hand, Canada, Mexico and Brazil are expected to witness an oversupply of office space, with widespread rental growth in Brazil not expected until 2016.

Cities such as London, Stockholm and Frankfurt have led the European leasing recovery, but are now joined by the formerly distressed margin. Dublin, one of the hardest hit markets, has recovered with double-digit rental growth anticipated.

"Occupiers have a clear preference for quality space but many are encountering supply constraints in an increasing number of cities," David Hutchings, partner and head of Cushman & Wakefield's European research group, said in the report. "This is pushing rental growth and occupiers will have to move sooner than expected to secure deals on the decreasing amount of quality space that is available."

More subdued growth is forecast for Asia Pacific, with rents expected to grow by 1 to 2 percent over the next year. As rents reach high marks in central business districts, businesses are looking for low-cost options outside, while upgrading to new construction at the same time, the report says.

"With the abundance of new supply especially in the emerging markets, it remains a great time to be an occupier," Sigrid Zialcita, managing director of research for Asia Pacific, said in the report.